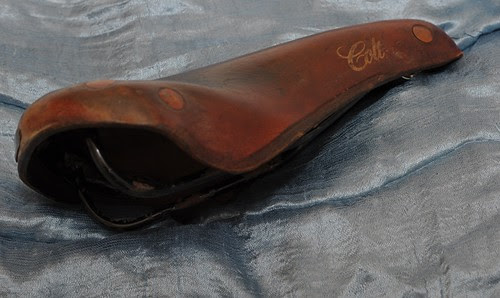 Some time ago I acquired a vintage Brooks Colt saddle. The original Colts are pretty rare, so I was excited. Unfortunately the saddle was deformed, sporting a prominent ridge down the center. On top of that, the leather was hard as a rock. The saddle was outright painful to ride for more than a few minutes.

To deal with the ridge, I was encouraged to try the blocking technique: soaking the saddle in water to regain its original shape. And I received just as many warnings against trying the blocking technique: The saddle could snap in half or become even more deformed I was told, I could ruin it. So I will preface with a caveat: As I understand it, blocking has a spotty success rate. To be safe, I would suggest trying it only on a saddle that is already ruined and unridable, as mine was.

There are different variations of the method, and the one I initially used was as follows: I soaked the saddle under the faucet, both the surface and the underside, until it was evenly wet. I then wrapped it in a wet towel, wrapped that in a plastic bag and let it sit. Two days later I unwrapped the saddle to check on it and was stunned to discover that, while wet, it was still hard as a rock. The moisture did not seem to be soaking through at all. So I wrapped it back up and left it for an entire week. When I unwrapped it again, the saddle was a bit softer, but the ridge showed no signs of diminishing. I thought that if I left it in there any longer the saddle would start to rot. So I installed it on a trainer bike and tried riding on it, thinking I could now flatten the ridge that way. But it was too painful to ride and it wasn't working. Eventually, I gave up and decided the experiment was unsuccessful. I treated the saddle with a generous dose of Proofide and put it away in a box, not sure what I'd do with it. 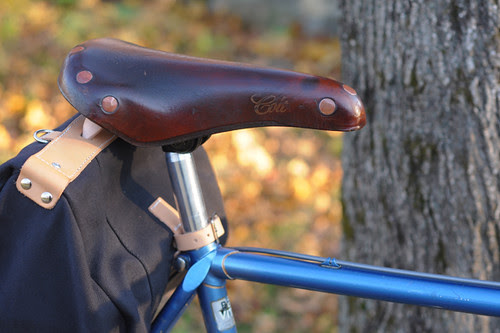 Some time later, the Co-Habitant needed a saddle for one of his bike builds and I said he was welcome to give reviving the Colt another try. At this point, our collective memory of what exactly was done is less clear, but we agree that it involved yet more soaking. The way I recall it, this time he left the saddle in a sink filled with water overnight. Possibly more than once. Eventually the saddle did begin to show signs of softening, and when this happened he installed it on his bike and went out riding.

The Co-Habitant weighs over 200lb, and I was worried that this was exactly the sort of situation where a soaked saddle might snap in half. However it did not snap, but began to straighten out under his weight. After a couple of rides and much Proofiding the deep ridge was flattened and now there are only a couple of gentle dimples in the sitbone areas. He says that the Colt is now very comfortable. It certainly looks nice and healthy: The colour is a rich warm chestnut and the surface is much smoother than it had been when I first received the saddle.

As our experience demonstrates, there is no one formula for this and you sort of have to play it by ear. The John Spooner description I linked to earlier suggests stuffing the saddle with newspaper after soaking it, but this did not seem appropriate in our case since the saddle was hardly soft enough even after excessive soaking. In general I'd say see how the leather behaves once you begin, and go from there. Start off conservative as far as water exposure, then get progressively more aggressive if that doesn't work.

All things considered, the Co-Habitant's opinion is that the blocking technique is more trouble than it is worth and he does not recommend it. My opinion is that it really depends on how much you want to rescue that particular saddle, and how prepared you are to potentially ruin it in the process. I am glad that we revived the Colt and now have this beautiful, functional vintage saddle. What has been your experience with blocking or other saddle reshaping techniques?
Labels: DIY restoration saddles vintage