On the Road without a Roadbike 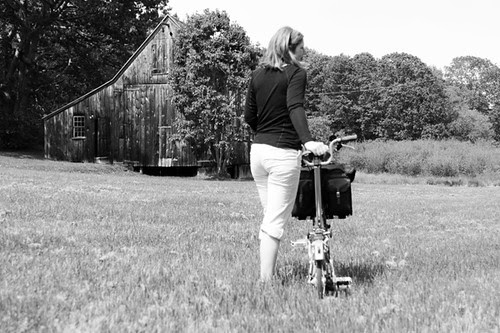 I like fast roadbikes, clipless pedals, bicycle computers, GPS, all of it. I do not subscribe to any philosophy that maligns these things in favour of the "slow bicycle movement" or whatever is the latest catch phrase to describe plain old regular bike riding. But I do believe in plain old regular bike riding, and sometimes I prefer it to any other kind. What are those times and what determines them, I couldn't tell you. It just happens.

When I went to Ireland last month I could have arranged to borrow a roadbike there, but opted against it - instead bringing along a folding bike that would have me riding upright the entire time. I knew I'd be slower and have more difficulty in the hilly areas, but somehow it just felt right to do it this way. I did not bring any cycling clothes. I did not bring a bicycle computer or a GPS device. Every day I simply looked at the map before setting off, then wrote out directions on a piece of paper. I explored interesting backroads and allowed myself to get lost. Occasionally I stopped to ask for directions. I did not miss my GPS. And I felt fine having no idea how fast or slow I was going. What did it matter if I stopped every 20 minutes to take pictures anyhow.

Probably at least part of the reason I chose to do things this way, was to see how I would feel after more than two weeks without a roadbike - without that rush I get from the speed, without the reassuring glare of the computer screen and without the ritual of putting on the special clothing I'd gotten accustomed to.

But moreover, I have found that I prefer to ride slower and more upright  when the focus of the ride is on exploring the surrounding area and not on cycling in of itself. Having never been to Ireland before, I really wanted to experience it as a human on a bicycle, rather than as a cyclist. And yes, there is a difference. Even the wearing of regular clothing and shoes played a role in this. The way people react to me is different, and the way I feel in the environment is different.

Now that I know the place better, now that it's more familiar, next time I would love to do some fast road rides along the Antrim coast. To ride through the glens on skinny tires, bent over my handlebars and pedaling as fast as I can. Bliss. A different sort of bliss than this time.

The more experience I gain with different types of bikes and different styles of cycling, the more I feel that the main thing is just to be out there, on your own terms. We like to define things, to draw boundaries. But often those boundaries are self-imposed. The road is calling. The bike is up to you.
Labels: Brompton clothing Ireland roadcycling social commentary