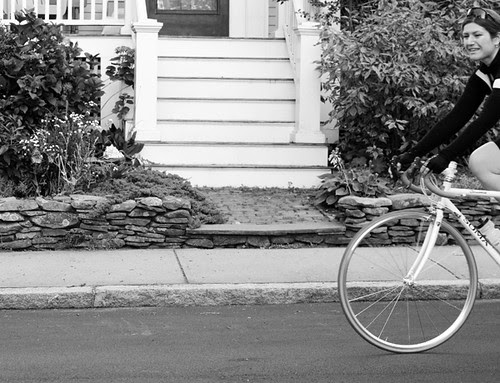 It seems like such a simple question. But the more I learn about bikes, the less certain I am how to answer it. As cyclists, our experience expands as we ride more, and as we try different bikes. And our vocabulary expands as we talk to other cyclists, bike mechanics, salespersons; as we read cycling literature, including myriads of bicycle reviews in magazines and blogs. One thing I notice is that while there are default terms used to describe bicycle handling characteristics, these terms are weakly defined - with different persons using them in different contexts. In particular, it fascinates me to navigate descriptions of bicycle stability versus twitchiness.

In reviews I will often read that a stable bicycle "tracks well" or "rides like it's on rails." As I understand this notion, it means that the bike holds its line of travel on its own accord, without the rider having to constantly micro-correct the steering. This is generally considered to be a good thing. But can it be too good? For me, when experienced at high speeds the feeling of the bike being on rails can also make it resistant to turning. And what about going around sudden obstacles? If the bike tracks so well that it resists changing course, would this not present a problem when encountering an unexpected pothole, or when the rider in front of us swerves?

The concept of twitchiness is not so simple either. There seem to be different kinds, and I can think of at least three: There is the "squirrely" twitchiness of a racing bike that makes it hard to control at slow speeds. This is not to be confused with the twitchiness of low trail - a very different kind of feeling, that gives the rider a more active role in the bicycle's line of travel. There is also the twitchiness associated with a "light front end," regardless of geometry.

Stability can vary with speed. On some bikes there seems to be a linear relationship: The bike will start out twitchy when slow, stabilise at moderate speeds, and "ride like it's on rails" when going especially fast. The faster you go, the more stable it is. Other bikes will be stable at slow speeds and track exceptionally well at moderate speeds, but then level out or even ease up at fast speeds. Other bikes still will handle more or less the same regardless of how fast you ride them.

Whether a bike is described as stable or twitchy, it is hard to know what that means without additional detail, which is not always available. What I wonder is, have there been efforts to maybe create a guideline for both reading and providing descriptions of how a bicycle rides? Without context and well defined terminology, it seems that anything goes and we can easily misunderstand each other's impressions of handling characteristics.
Labels: ride quality roadcycling