How Upright Is Upright?

There is a tendency to group all upright transportation bicycles into the same general townie/cruiser-ish category. And when we see the description "upright bike" we imagine whatever it is that fits our own definition of that idea. But differences in what are commonly referred to as "upright" positions can be considerable. Above are three classic examples side by side: a traditional Dutch bike, an Italian city bike, and a French-style mixte - all three of which I have owned and ridden.

To a large extent it is the placement of the handlebars that determines how upright a bicycle is set up. But while the Dutch bike's handlebars can be lowered and the bars on the other two can be raised, it's not entirely as simple as that: The design of the frame itself assumes a particular range of positions; the frame geometry is optimised for it. 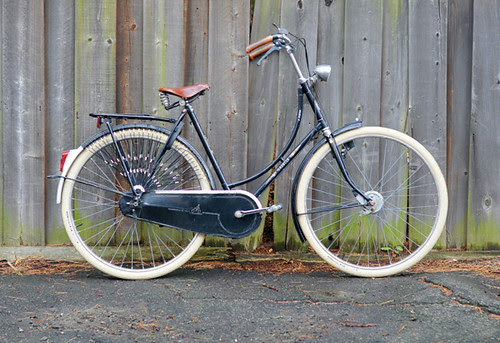 The Dutch bike is designed to enable a bolt-uright posture. The handlebars are high. The stem is so short as to be practically non-existant, bringing the bars even closer to the rider's body. The seat tube angle is slack. Altogether, the cyclist is "pushed back" on the bike into what almost resembles an armchair position. The epitome of "upright," this posture is not for everyone. But it is supremely comfortable for short trips and it allows cyclist to observe their surroundings from a greater height. 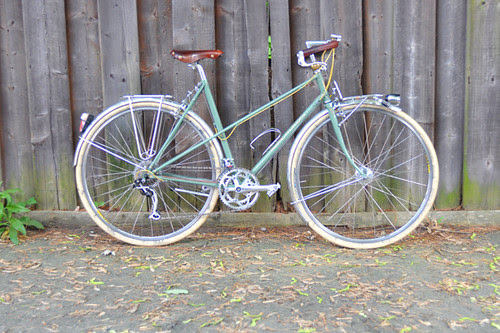 The traditional French mixte is typically more aggressive than other city bikes. The frame design is frequently not very different from that of a road bike - steep angles, head tube not much higher, if at all, that the seat tube, comparatively lightweight tubing. When built up as upright bikes, these bicycles are at their best when set up with long stems and handlebars at or even below saddle level. With the cyclist's weight pushed forward, the bicycle is extremely responsive and maneuverable. But the "upright" posture with this set-up can be quite aggressively leaned over. 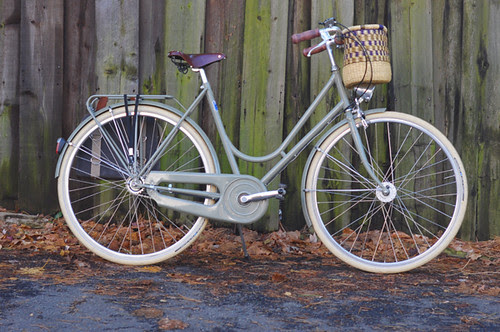 Somewhere in the middle, the Italian city bike is really a variation of the so-called "sports roadster" design (the ubiquitous Raleigh Sports and Lady's Sports were examples of these): swept-back handlebars at or moderately above saddle level, combined with a short stem for a generally upright but slightly leaned-forward position. The seat tube is not as slack as that on a Dutch bike, but still relatively relaxed. The cyclist can lean into the bike if they wish to apply more power, or they can sit back. I personally find this to be a very versatile position - though others might call it "neither/ nor" - neither as regally relaxed as a Dutch bike, nor as maneuverable as a roadish French mixte.

While definitions of "upright bike" run the gamut, my personal definition requires that the bicycle pass the Camera Test. That is, I must be able to ride the bike with my large camera staying put on my back, strap worn across my chest, without the camera rotating to the front. I can't do it on a roadbike with drop bars, not even when I am on the hoods or the tops. But I can do it on all three bikes shown in this post, which makes them all different variations of "upright" to me. What do you typically think of as an upright position, and which do you prefer for everyday cycling?
Labels: comfort Italian bicycles loop frame mixte