Cycling Up an Appetite: Women and Food 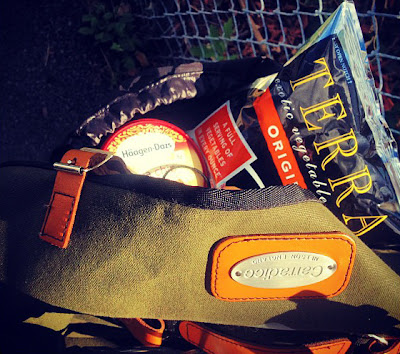 When I was in graduate school, a friend was conducting a research study that involved interviewing female students with and without eating disorders. This proved to be more difficult than she anticipated. Of the young women she'd recruited though a randomised process, all but one showed signs of disordered eating: She did not have a sufficient control group. So she dismissed her initial participant pool and tried again, only to get a similar result. Eventually this caused her to change the direction of the investigation: Her inability to recruit a group of university women with no history of eating disorders in itself became the theme of her research.

Looking back at this 10 years later, I don't think that she or I would have qualified for the control group of that study either. While neither anorexic nor bulimic, our eating was not what I would now consider normal. We were hyper-aware of our calorie intake. We knew our precise weights. We paid attention to the times of day we ate. After a meal, we would keep a mental note of the amount of exercise we'd have to do to compensate for it. The truth is, eating at that age for many of us was an inherently conflicted experience, the effect of food on our bodies ever-present in the backs of our minds. We were not fashion models and we were not athletes; we were university students. For most of us, it was not about our looks but about maintaining control in a competitive and stressful environment.

It was also a matter of having lost our natural appetite regulation mechanisms. We counted calories because we genuinely had no idea when we were truly hungry and when we were not. Our hunger and satiation signals were so out of whack with reality that we no longer trusted them. At age 12, feeling hungry simply meant I needed to eat something. But by age 22, this connection had become severed. There was nervous hunger, cravings for comfort food during all the endless studying, emotional eating. Lack of appropriate satiation signals could lead to overeating unless we were vigilant. And so we were, and it made us miserable.

How did this become the norm for so many women? Most likely it began with dieting during our teenage years and spiraled from there. We did not see it as abnormal, because we were neither puking up food nor outright starving ourselves. We were simply "eating healthy," watching our weight, making sure we maintained whatever clothing size we saw as being appropriate for our body types. But in truth we were suffering, and did not know how to put an end to it. In retrospect, I cannot believe how normalised this was in my generation of university women. Most of my female friends, acquaintances and colleagues had these issues and hid them with various degrees of success. Countless male friends have told me that they've never had a girlfriend who was not "weird" about food.

I cannot pinpoint exactly when things began to turn around for me. Possibly it was moving to a large city in my late 20s where I was suddenly doing lots of walking - not for exercise, but as a natural part of living and getting around. But riding a bike was what really accelerated the process of getting my appetite instincts back on track, so the connection is a strong one for me. Experiencing my body as a useful machine and not just as a bothersome appendage to my brain was what really did it. Through cycling I began to think of food as fuel. If I wanted to ride, I had to eat. And at age 30, for the first time in what must have been 15 years, I was once again able to eat when hungry and stop when full, just like I did when I was a child.

Since I began writing this blog, I have spoken with many, many women cyclists who describe similar experiences. Regaining trust in their hunger and satiation instincts for the first time since their pre-teens has been a gift more dear than they can express. And while cycling is not the only way to achieve this, it is certainly a great way, both fun and practical. Here's to all the women out there, cycling up an appetite.
Labels: food gender