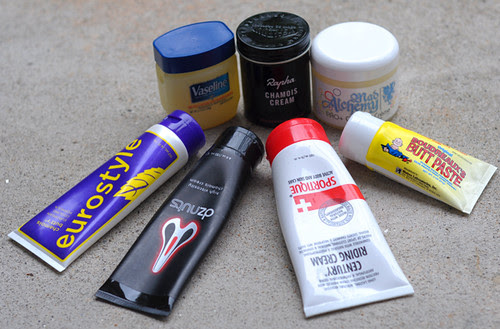 One of the first cycling-specific products I began to use when I started riding for longer distances, was chamois cream. Pronounced "shammy cream," this type of product is applied either directly to the crotch or to the inside of bicycle shorts (or underwear), in order to reduce chafing. The creams also have soothing, wound-healing and antibacterial properties that feel nice and help prevent infections. I have extremely rash-prone skin and I am prone to UTIs, but using chamois cream has virtually eliminated these problems. I go through the stuff fairly quickly, using up a tube every 1-2 months when I ride regularly. I have tried a handful of different brands. When I run out, I usually buy whatever the local bike shops sell, which can vary. A couple of the creams I've gotten based on friends' recommendations. Here is what I think of the ones I've used over the past 3 years: 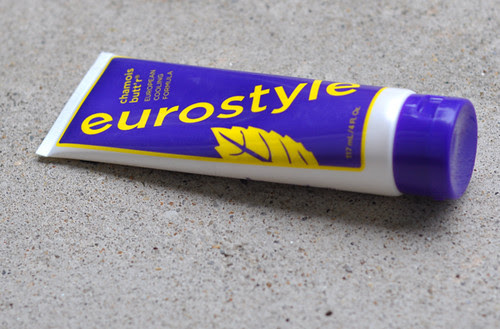 I will start with Chamois Butt'r, which was the first cream I tried. It is available in two versions: regular and "eurostyle" - the former being non-tingly and the latter tingly. I bought the regular version first, and it did not work for me all that well; I found it somewhat bland and not entirely effective in preventing chafing unless I used a huge amount. It also did not stay effective for very long - maybe an hour tops. So next I tried the eurostyle and liked it a lot better; it did a better job preventing chafing than the regular version and lasted longer. It is worth noting that some people can't stand the tingly/cooling types of chamois creams and find that they burn or itch, so be careful. However, I do not have this problem and prefer the cooling creams.

The consistency of Chamois Butt'r is medium-thick. Ingredients of the eurostyle version include witch hazel, aloe and menthol. But the dominating scent is oddly medicinal rather than herbal. While not my favourite cream, the eurostyle Butt'r does the job. I also like that it comes in smaller tubes, making it easy to keep in a jersey pocket in case you need to reapply in the course of the day. 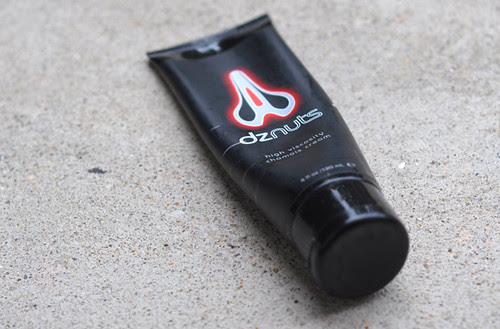 I tried DZ Nuts because it was the only cream a nearby bike shop carried when I ran out and needed more. I remember distinctly how reluctant I was to get it, because the packaging put me off (the image just says "crotch on fire" to me). But once I tried it, it became my preferred product. DZ Nuts has a cooling feel similar to the eurostyle Chamois Butt'r, except it works better for me and the effects last longer. The soothing and healing properties are excellent, and I have even used it to soothe sunburn and rashes outside the saddle area. There is now a woman's version of this cream (Bliss) and I tried a sample at some point, but did not care for it. They basically eliminated the cooling effect for the women's cream.

The consistency of DZ Nuts is on the thin side, similar to body lotion. Ingredients include tea tree oil, sandalwood, barley extract and menthol - which the scent reflects. The scent is pretty strong and that might put some people off, but it does not really bother me. I like that this cream comes in a tube, though I wish a smaller size was available. 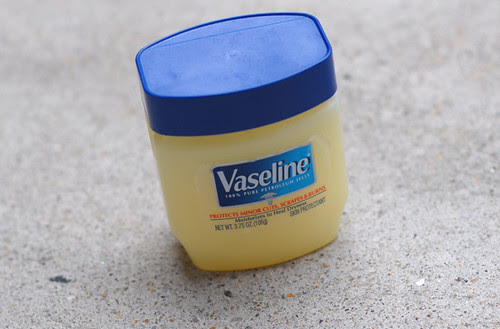 While Vaseline/ petroleum jelly is not marketed as a chamois cream, it can work in that capacity. I learned about this on Rivendell's website (here is the article) and decided to try it, since it's so much less expensive than actual chamois cream and readily available in any drug store. Vaseline both lubricates and heals. There is no tingling to bother those who are sensitive to it, there are no ingredients than can irritate, and the smell is more or less neutral. When traveling long distance, a cyclist can stop at any pharmacy and get some.

However, the problem I found with Vaseline is that it can seep through bicycle shorts (especially if they are unpadded) and discolour or otherwise damage leather saddles. It can also discolour the shorts themselves, leaving grease-like stains that resist removal. I stopped using Vaseline fairly quickly for these reasons despite its effectiveness and low cost. But I would still use it in an emergency, and I often use it post-rides. 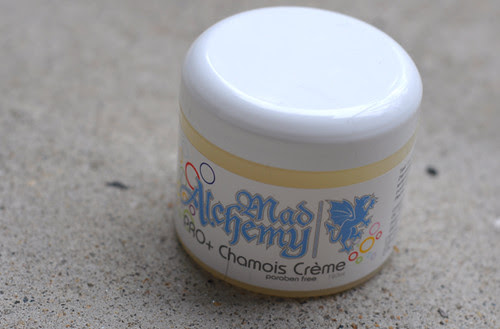 Mad Alchemy is a local-to-me company. Their chamois cream is all-natural, paraben-free, and US-made in small batches. So far I have tried the Pro+ and the LaFemme versions of the cream. They both feel markedly different than the mass-produced creams, especially the texture and smell - both are somewhere in between the filling of lemon pie and old-fashioned cold cream. It looks whipped, semi-transparent and almost luminous. As far as chafing prevention, I find the Pro+ version more effective than the LaFemme. The Pro+ has a mild tingly effect and combines some of the properties I like in DZ Nuts and eurostyle Chamois Butt'r, but suspended in a different type of base.

The consistency of the Mad Alchemy Pro+ is medium-heavy. Ingredients include grape seed, tea tree, sweet orange and lavender oil. The scent reflects this, but is very mild. While I like everything about the Mad Alchemy cream in itself, I find the packaging inconvenient as I can't carry it in a jersey pocket and reapply when necessary. I wish they made a version in a tube. 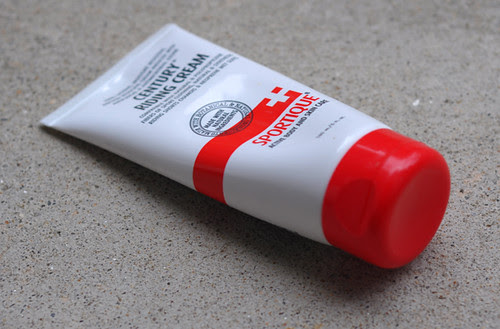 I bought the Sportique Century Riding Cream on the recommendation of a friend, who rides long distance and is crazy about it. I was complaining that no saddle seems to feel comfortable to me after 60 miles or so, and she recommended liberally applying this cream as a solution. I did, and I wish it worked. The cream is described as anti-microbal and anti-fungal. But honestly, it just feels like thick moisturising lotion. Sure, it prevents friction if I absolutely pack my shorts with it, but the effect fades fairly quickly and I do not experience the healing and soothing properties as I do with the creams I prefer.

The consistency of the Sportique is medium-heavy. Ingredients include shea butter, wheat protein, sweet almond oil and beeswax. The scent is heavy on the shea butter and quite strong, almost candy-like. While this cream might work wonders for some, it is not for me. 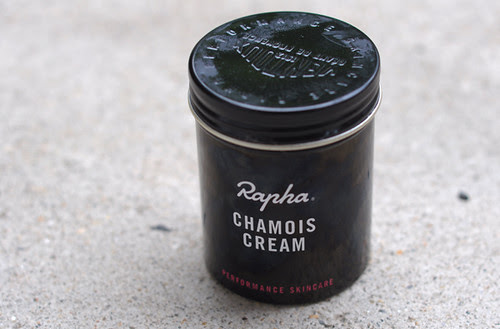 I tried the Rapha chamois cream over this past winter. I forgot to apply my own cream before a long ride, and a local shop had it in stock as a new release. Like many Rapha products, this cream has a whole romantic narrative attached to it ("...inspired by the flora around Mont Ventoux") and comes in some pretty fetishistic packaging including a slender tin jar with raised lettering. But this aside, the product works very well for me: It cools, soothes, prevents chafing and its effectiveness lasts a surprisingly long time (possibly the longest of the chamois creams I've used).

Consistency is medium-thin, similar to DZ Nuts. In the jar it resembles the original Noxema face cream I used as a teenager. Ingredients include glycerine, shea butter, menthyl and rosemary extract. However, it smells rather aggressively of pine - which I can't stand in any context other than on actual pine trees. So while I like the cream quite a lot, my dislike of the smell prevents me from purchasing it again. That, and the pretty jar is awkward to carry in my jersey pocket. 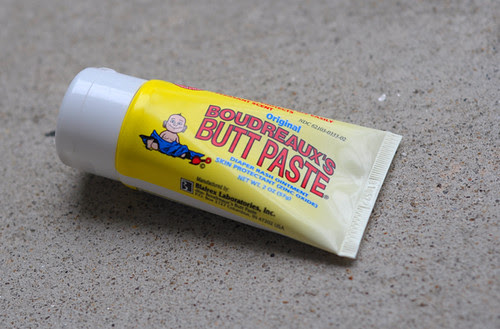 Boudreux's Butt Paste is the product Pamela Blalock recommends, so of course I had to try it. I ordered myself a sample and am not sure what to make of it. Not an actual chamois cream but a diaper rash treatment, the consistency and smell are like nothing else I can reference. Ingredients include zinc oxide, boric acid and castor oil. The scent is medicinal and odd; I can't really place it. While mildly unpleasant, it is not overbearing. The colour is tan-brown. Consistency is half way between toothpaste and putty.

True to its name, this stuff is definitely a paste and not a cream. It feels a little stiff to apply and does not spread quite as easily as actual chamois creams. The upside is that it stays put rather tenaciously. If your saddle discomfort is concentrated in a specific spot, this could be a particularly good product to use because it will actually stay in the area where you apply it. I have not yet decided whether I prefer Boudreux's over the other creams I like, but it is certainly an interesting one. And the fact that it comes in tubes of different sizes is very convenient.

All things considered, the chamois cream I gravitate toward the most is probably DZ Nuts. It works for me, it can be purchased at several local bike shops, and it's available in a tube. But as with most other products, preferences differ. I like the "euro" style creams with the tingly/cooling sensation, while others cannot tolerate them. Despite being female, I consistently prefer the men's/unisex versions of creams and don't like the women's formulas. I find tubes more practical than jars. And I am relatively indifferent about a cream's consistency and texture, while others have very specific preferences in this regard. Chamois creams differ in their properties and it may take you a couple of tries to find one you like. While some popular names are absent from this review, these are the products I've used so far and I hope my descriptions are helpful.
Labels: comfort product reviews Rapha roadcycling