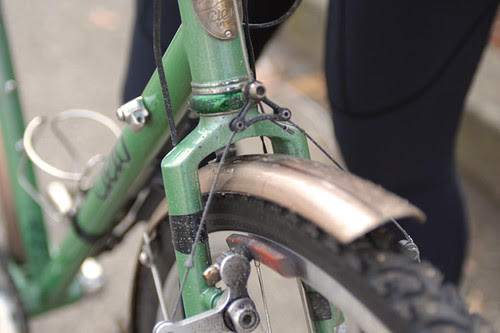 This morning I came across the phrase "aesthetics of use" when it appeared in Bill Strickland's description of his muddy cycling shoe. It is a term I often hear thrown around by artists and designers. In essence, it means that to see an object in use is beautiful - that an object reveals its true self not on display, but in action. Some makers like to think of the aesthetic direction their objects take in the new owners' hands as a happy surprise. Others try to control it. Others still encourage what might be called hyper-use (or at least superficial signs of such), believing that distress enhances the appeal of their creations. These attitudes can be discerned in the manner manufacturers describe and promote their products. Owners' attitudes run the gamut as well. Some emulate the manufacturer's vision in their use of the object, while others are intent on making it their own. 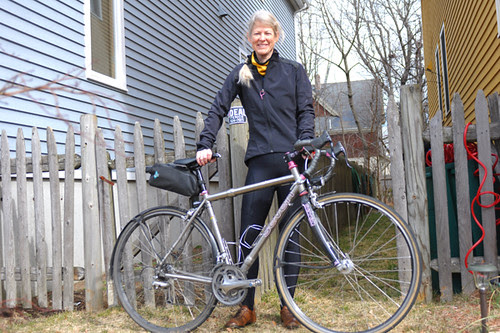 Thinking of these differences, I am reminded of Pamela Blalock's bicycles. A local randonneur who probably spends more time in the saddle than not, she has a few bikes and they are very nice ones. At some point I had it in mind to test ride and feature some of them here. But the more I examined them, the more I realised that the bikes say more about Pamela herself than they do about the manufacturers and models they started out as. 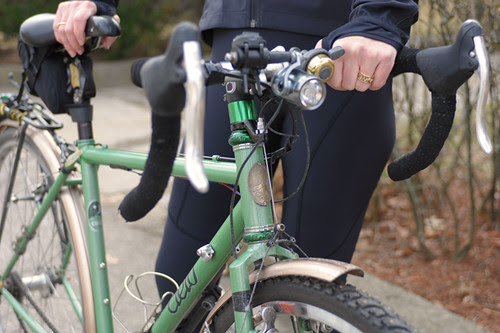 Befendered, weathered from winter commutes, and covered in all manner of curious contraptions, "Cielo Cross bike" hardly seems like an apt description for the magnificent creation that is the Green Queen - Pamela's transportation bike. Fixed gear, rear rack, dynamo lighting, possibly more than one bell - these things make sense to her; the bike is clearly built with a purpose. 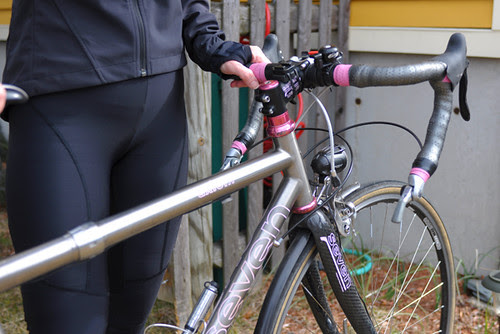 Neither is it really accurate to describe her roadbike as a Seven Axiom and leave it at that. While I do not think Pamela was the first to put dynamo lighting and bar end shifters on a Seven, she certainly managed to do it in a way that looks eye-catchingly unusual - blurring boundaries between racing and utilitarian riding and making others question their own understanding of these boundaries. The visually distinct setup reflects preferences that developed out of personal experience. Pamela came up with these ideas from doing years of long brevets and endurance races. It's what works for her in use, and the aesthetics are merely a by-product. 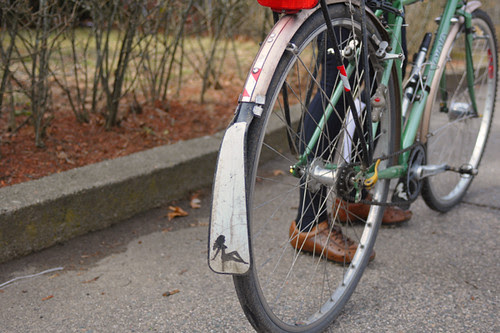 We all have our own ways of using objects, of gaining experience, and then of changing the way we use objects as a result of what we learn from experience. We can follow a manufacturer's vision, we can imitate those whom we admire, we can heed the advice of the more knowledgable. But ultimately we each have our own trajectory to follow. Aesthetics of use are personal; they are not generic, rigid ideas of how an object ought to be utilised.
Labels: bike friends fenders lights Pamela Seven