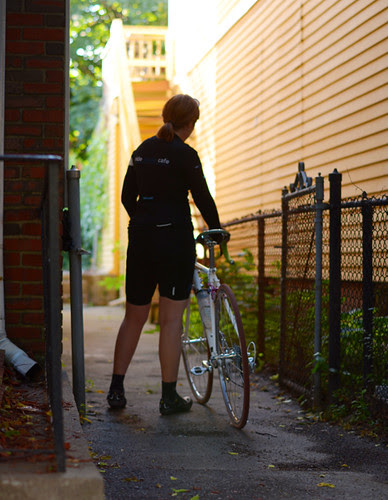 Despite our idyllically mild summer, I have not been doing much in the way of long or difficult rides. Somehow I just haven't been able to get into the rhythm of things after returning from Ireland. My body is absolutely treacherous when it comes to things like this, too. The more and harder I ride, the more and harder it wants to ride. But if I ease up, it quickly gets lethargic and soft, creating a vicious cycle. "I can't join that fast group ride today, I am too out of shape!..." but of course that only makes it worse for next time.

Today, however, I woke up with a calm sense of certainty. This was the day I would get off my butt, move my schedule around, and go on a long ride. I didn't know how long, but it was going to happen. Setting off in the early afternoon, I eased myself into it by stopping at the Ride Studio Cafe 10 miles in. I think secretly I hoped there would be someone there who'd ride with me, saving me from the urge to sit around drinking coffee and reading magazines all day. But no such luck. Summoning my willpower I pressed on.

And after that, something strange happened. Namely, I sort of relaxed on the bike and got lost in daydreaming. This happens to me sometimes, but never for this long. Before I knew it I was approaching the end of a familiar training loop on auto-pilot. Surprised and not feeling very creative, I could think of nothing to do but repeat the loop, determined to be more mindful this time around. There is a hill along the way, and it's one I have always disliked. How was it possible that I hadn't noticed it, daydreaming while climbing and not even feeling the dreaded "out of shape" pain?

The second time around the loop, I approached the hill with awareness. Okay, so here it was ahead. I downshifted. Now here I was, cycling up the hill. I waited for the misery of it to wash over me, but it didn't. Instead, it was almost meditative. Enjoying the shade of the leafy trees, my mind wandered in the middle of the climb. Before I knew it, I'd completed the entire loop again and it was time to ride home before it got dark.

I rode a total of 65 miles and it took me about 4 hours. It was not a difficult route, but I am still surprised that I was able to just go out and do it. My muscles may have turned to jelly over the past couple of months, but apparently some of the endurance I'd built up is still there. The mysterious ways in which the human body responds to cycling and changes because of it never cease to amaze me. Several hours and a cheeseburger later, I am now clutching my aching legs, reaching for Ibuprofen, and complaining - but also feeling deliciously alive. No matter what we might think, we are never too out of shape for a ride.
Labels: roadcycling Soma