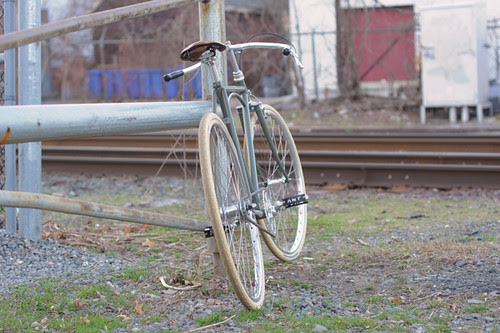 When I decided to build up an ANT Truss Bike as a single speed with a coaster brake, I soon discovered that the only commonly available hub choice was Shimano. I have ridden Shimano coaster brake hubs, and there is nothing wrong with them. But somehow having one on a bike that was otherwise so old-school and classic felt off. So I asked around and learned, via the ever-helpful bikeforums, about a small manufacturer in the Czech Republic called Velosteel. 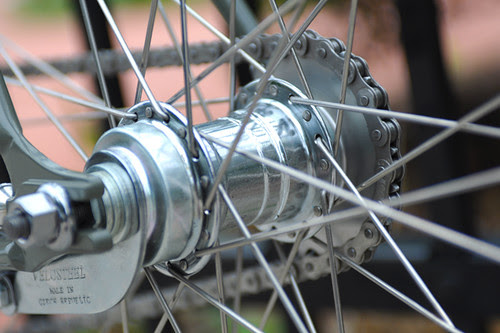 Velosteel focuses exclusively on producing single speed coasterbrake hubs. As I understand it, they took over the machinery that was used by the former Fichtel & Sachs company to manufacture the original Sachs hubs before SRAM bought them out. Therefore, Velosteel hubs are supposed to be identical to the vintage Sachs single speed coaster brake hubs found on many continental European city bikes made prior to the year 2000 - especially Dutch and German bikes. I have ridden a number of bikes with Sachs hubs in the past and I've always liked them, which made Velosteel an appealing choice.

As of last summer, the way to buy a Velosteel hub was on ebay. I do not remember where I bought mine, but I am told this is a reliable source in the US. I am still not aware of any US bike shops that carry these hubs, but if you are please let me know and I will update this information. I bought the hub, and Jim at Harris Cyclery built me a wheel around it. 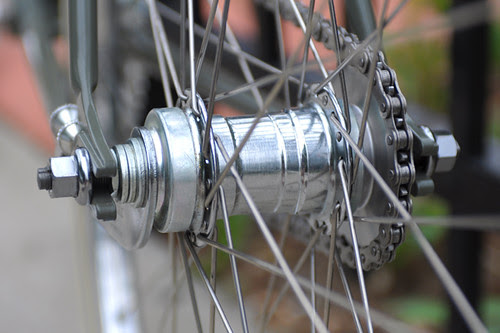 While I am not sufficiently knowledgeable to explain why the Velosteel hub is more "old school" in its construction than a currently-produced Shimano hub, suffice to say that its overall form, its finishing, and the way the shell is put together all look distinctly different from modern hubs and distinctly similar to vintage ones.

There is no branding on the hub itself, and the only mark of the manufacturer seems to be on the reaction arm, which is stamped with: "VELOSTEEL MADE IN CZECH REPUBLIC." There may be a serial number stamped somewhere indicating date of manufacture and such, but I have not noticed it. 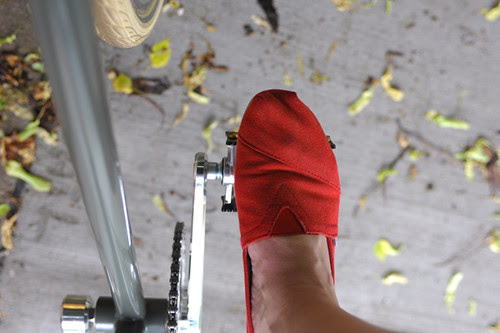 Having ridden the ANT over the past several months, I can make some observations about the Velosteel hub. My first impression was that it was too "soft;" I could not lock up the rear wheel without exerting a huge amount of effort. However, I wanted to wait before sharing this impression - thinking that it was possible the hub would "wear in" over time. And it did, after about 40 miles - during which I made it a point to use the brake often. Now the hub can lock up the rear wheel with reasonable effort. It also modulates braking power very nicely, which is something I love about a good coaster brake. I do feel that the Velosteel allows for finer modulation than the currently produced Shimano coaster brake hub. I get into the rhythm of using it, and it makes city cycling feel like such an organic, smooth experience.

Last year I started a discussion about vintage vs modern coaster brakes and the amount of backpedaling "give" they allow before the braking mechanism is engaged. I noted that in my experience, older coaster brakes allow for more give, which I prefer. In the comments others reported this difference as well - but some suggested that it might be a function of the vintage coaster brakes being worn out with age, as opposed to differently designed. Well. My Velosteel hub started out brand new, and it has "give" similar to the old vintage Sachs coaster brakes I've ridden. This is just one piece of anecdotal evidence of course, but I think it's useful to offer it. 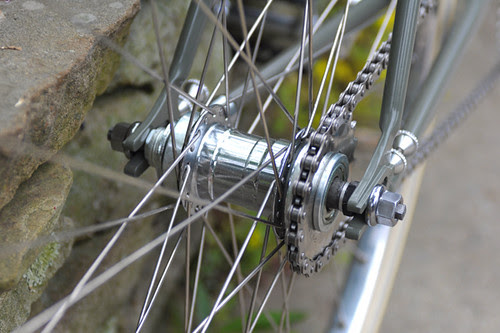 Overall I like the Velosteel hub and have a feeling it will only improve with age - somehow, I feel as if it's still wearing in. I would love to get feedback from others who have used it, especially on a bike that's their regular commuter and for a period of several years.

As with everything, I think it is good to have options. The Velosteel hub might be a welcome alternative to Shimano for those who prefer a coaster brake hub with a more classic look and feel. I wish more American bike shops carried Velosteel.
Labels: ANT coaster brake product reviews