Traveling to Ireland with a Brompton 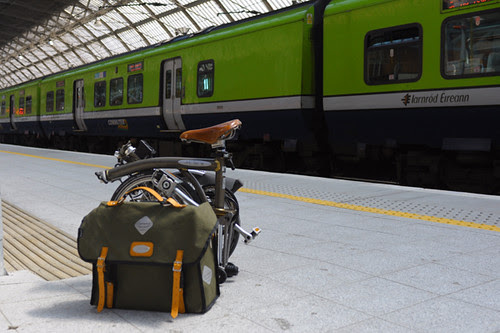 Over the past weeks, I have traveled to, from and around Ireland with my Brompton folding bike. Aside form flying from Boston to Dublin and back with the bike as part of my luggage, I also did a great deal of what I think is called "multimodal commuting" in the Republic of Ireland and Northern Ireland, making frequent use of local trains and buses. Overall I experienced relatively few problems and would certainly do this again.

I flew Aer Lingus, and they treat bikes as any other piece of checked-in luggage. Passengers are allowed one checked bag as part of their ticket price. If they want to check in an additional bag (or bike box) it costs extra. The size of the Brompton - no matter what bag it is placed in - exceeds the size limit of Aer Lingus's carry-on luggage allowance and must be submitted as checked luggage. Knowing this, I decided to get a hard case for the bike. I needed to replace my old hard shell suitcase anyway, and figured it made sense to do it this way. 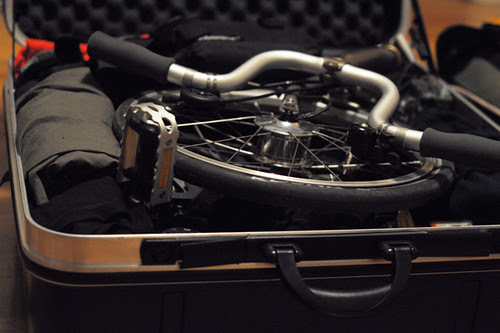 The padded hardshell case is made by B&W (they call it the Clapton Box) and is not technically a Brompton-sanctioned product. However, it fits the bike perfectly and is sold by several retailers as a Brompton accessory. I bought mine from Clever Cycles, and I know NYCE Wheels sells them as well. There is some debate as to whether the hard case vs the Brompton B-Bag is preferable for airplane travel. Based on my own experience with international travel, I prefer to use a hard case.

The B&W case is nice in that it fits the Brompton so exactly that there is no room for the bike to move around inside. At the same time, the nature of the folded shape allows stuffing the case with other (soft!) items. I packed all of my clothing, as well as 2 pairs of shoes into this case in addition to the bike, rolling each piece up and stuffing it into a crevice. The total weight was just under the Aer Lingus checked baggage limit. The size of the hard case fits Aer Lingus's checked baggage parameters.

The hard case with the bike and all my clothing was the only piece of baggage I checked in, thus managing to avoid extra fees. I also took a small rolling suitcase as a carry-on, and my Carradice bag as a purse/ personal item thingie. The airline had no problem with this. 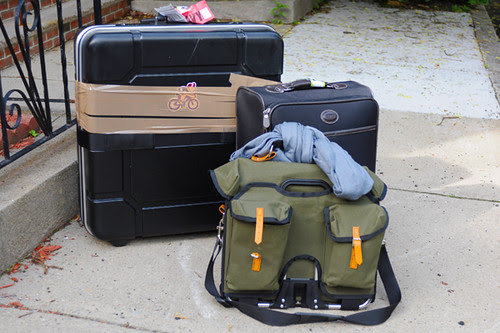 The problem I did have was with the TSA. When I checked in my hard case at the airport in Boston, the person handling the luggage pointed out that the closure seemed easy to open accidentally when left unlocked. She suggested I lock the case and attach the key to the outside, lest the TSA wish to open it. That is what I did. Once I landed, I was horrified to discover that the closure on the case had been tampered with and the key was no longer there, with no explanation as to what had happened. I had a spare key, but somehow it no longer worked. Trying not to panic, I arrived at my relatives' house, then looked for a locksmith at 7am as my first order of business in Ireland. There was one nearby and I rolled the hard case to them, close to tears at this point, imagining that the Brompton was all mangled inside as well. The locksmith examined the damage. Turned out, there was a piece if key stuck inside, which is why my spare key did not work. They used a pick to remove the piece of key and opened the case. Thankfully, neither my bike nor any other contents had been touched. And there was a note from the TSA inside, with the other half of the broken key taped to it. The hand-written part of the note said: "difficulty opening lluck." There was also a bunch of legal text saying that my case had been opened as part of standard procedure and that the TSA was not liable for any damage.

The lock on my case is still functional, but it is slightly mangled, and I will see whether I can get it fixed. On my return trip on Aer Lingus I did not lock the case again, but wrapped packing tape around it - in addition to the velcro closure strap the case already comes with. Not very elegant, but it did the job. The case was not opened on the return flight. 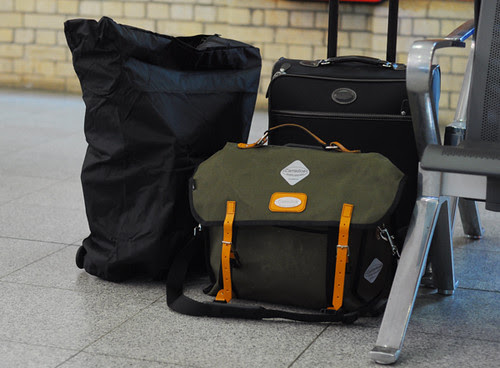 My trips from Dublin to Northern Ireland and back were completely problem-free. I left the hard case at my relatives' house and traveled with just the small suitcase, Carradice bag, and the bike sheathed and folded. I got to the Antrim coast by train and bus via Belfast, and wrote about that trip here. That went well, but the way back was even easier: On the day I was leaving Northern Ireland a friend took me to see Derry, and from there a bus goes directly to Dublin. I stored both the sheathed Brompton and the suitcase in the luggage compartment on the side of the bus, and it was very simple. I have seen cyclists store full sized bikes in the luggage compartments on the sides of buses, though I don't know what the official policy regarding this is.

Having done both, I would say that long distance travel within Ireland is more convenient by bus than by train. The buses run more frequently, the stops tend to be more conveniently located, the platforms are easier to access when carrying luggage, and overall it was just a more straightforward experience whenever I opted to get somewhere by bus as opposed to train. In the US I do not like to travel by bus, as I get motion sick. Oddly I did not experience this on the buses in Ireland. 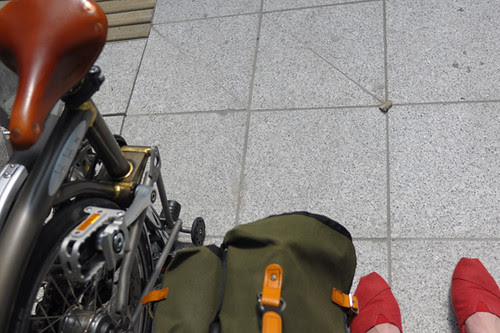 Even when not traveling, I would sometimes take my bike on a local bus or train when visiting friends, or when doing a ride with a remote start. 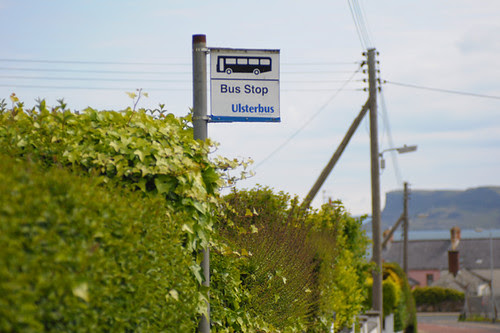 In Northern Ireland, I made use of the Ulsterbus, which runs frequently between the various towns and villages along the coast. 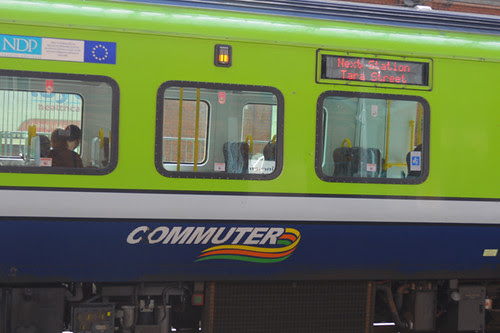 In the Republic of Ireland, I rode the DART commuter train from  the seaside suburb of Dun Laoghaire, where I was staying, to Dublin a couple of time. All of this was extremely easy to do, with no one questioning my bringing a folding bike on board. I did not have to sheath the Brompton in order to disguise it, and in some cases did not even need to fold it. 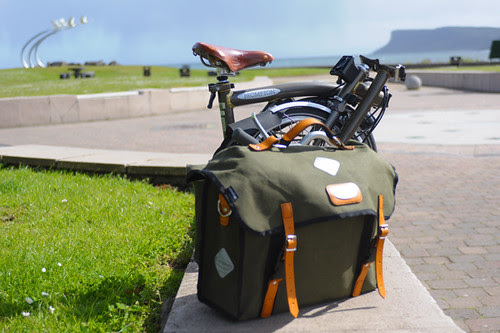 I am happy with my decision to bring the Brompton along to Ireland, and with how I chose to do it. Traveling around with the bike and additional luggage was easy. The transportation system there is excellent compared to most parts of the US. I also enjoyed flying Aer Lingus. They have straightforard baggage guidelines and are pleasant to deal with.

As with any international travel from the US, the biggest risk factor is the TSA. Their behaviour is unpredictable and you just never know. In my experience, TSA-specific locks do not always help: Many of my colleagues have had these locks cut and their luggage damaged regardless. The best thing is not to lock your case, period, and to use extra velcro straps or tape for added security if desired. When it comes to bikes specifically, there is also some debate as to whether it is preferable to travel with the bike in "stealth mode" or to make it as obvious as possible that there is a bike inside. Based on the combined anecdotal evidence I've heard, I believe the latter is best when it comes to the TSA. If they don't know what something is, they are more liable to damage it in the process of trying to find out. Either way, travel insurance is a good idea when overseas travel from the US is involved.

Back in the US now, I may return to Ireland later this year - again with the Brompton in tow. Having my own bike at my disposal at all times was invaluable; I cannot imagine traveling otherwise from now on.
Labels: Brompton Ireland small wheels transport transportation options travel