Traveling from Dublin to the Antrim Coast, with Luggage and a Brompton 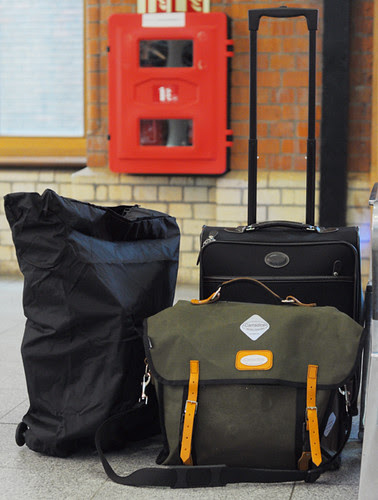 I am staying in a remote area on the Antrim Coast in Northern Ireland, near the town of Ballycastle. Getting here from the suburbs of Dublin was quite something, though very much worth it in the end. I had with me three pieces of luggage: A suitcase on wheels, my fully folded Brompton bicycle sheathed in a cloth cover, and a Carradice City Folder bag that can also be carried as a shoulder bag. I am an average sized female with below-average upper body strength, and lugging these 3 things around on my own through the various segments of the trip was doable. I rolled the suitcase in my left hand, carried the Carradice across my chest messenger style, and carried the Brompton by the frame in my right hand. This last part was the most difficult for me. The Brompton weighs over 20lb and I can only carry it in one hand for so long, especially if I am also dragging other things at the same time. But again, doable.

As is probably obvious by the rolling suitcase, this is not the sort of trip where I planned to ride to the train station and to my destination upon arrival. I am not touring, but rather traveling with a bike, which I intend to use once I settle in. I will be here for a while, staying in the same place the entire time, and so I wanted to be comfortable, have plenty of clothes to change into, and have all the camera equipment I wanted with me. I thoroughly researched the transportation situation in advance and determined that for the last leg of my trip, a bus could drop me off within walking distance of the place I am staying despite its remoteness. There is also a local commuter train (DART) that stops just down the road of where I stayed in Dun Laoghaire and goes directly to the train station in Dublin. I was a little nervous of course that things don't always work out in reality as they should, but I had an emergency taxi fund just in case. 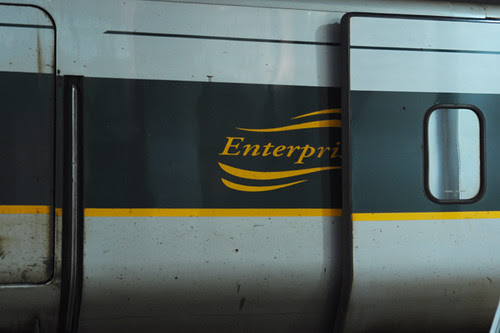 The main leg of the trip was taking the train from Dublin to Belfast. These leave from Connelly Station in Dublin and they run roughly every hour on weekdays. I knew that it was supposed to be hassle-free to travel to Northern Ireland. But I didn't expect that it would be quite this nonchalant. There was nothing about the ticket purchasing or boarding experience to indicate that we would be crossing a border. I simply bought a ticket to Belfast. No one asked me to show ID. No one asked why I was traveling there.

The train station itself was a remarkably calm place compared to other train stations I have been to in large cities. No pushing, no yelling, quiet, everyone incredibly courteous. A few people tried to help me with my luggage at various stages. I wasn't struggling with it, so I think the motivation might have been a sense of fairness - that they had none and I had three pieces, so they might as well carry some of mine to even it out. 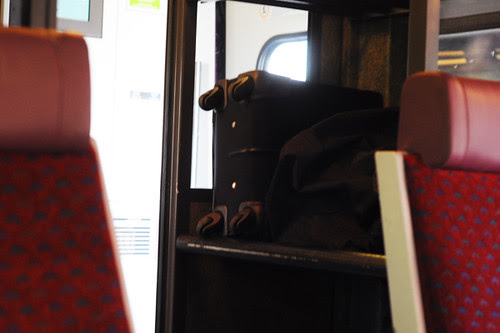 On the platform I saw a man with a folding bike and a couple of large bags. He must have been watching me also, because when the train arrived he pointed to an entrance indicating that I should use that one. I did, and it contained a nice empty luggage compartment. I easily fit both my suitcase and my bike on the middle shelf. I then sat nearby with the Carradice bag on the floor next to me.

Once the passengers settled in and the controller checked everyone's tickets, a trolley cart was brought by selling food. I bought a hot tea, and the server asked whether it was okay to give me change in pounds sterling, since he was out of change in euros. This was the first indication that anything would be different at our destination. 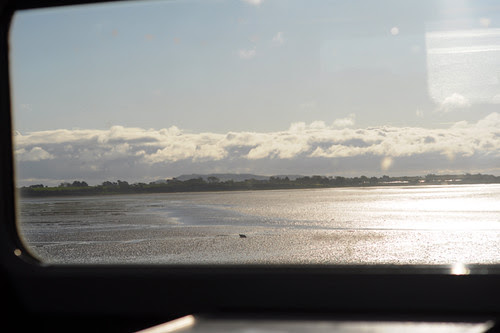 The train from Dublin to Belfast proceeds mostly along the coast, and the views are beautiful. The sun even came out. I relaxed and felt pleased at how well everything was going.

An hour and a half later, the train broke down. We waited inside for 15 minutes as they tried to fix it, but were finally asked to disembark. It was then announced that we would be switching to a local service commuter train for the remainder of the journey, and that this train was waiting for us on a platform a short walk away, accessible by multiple staircases. An elderly lady beside me poked me with her elbow, winked, and said "Welcome to Northern Ireland."

I braced myself for the ordeal of multiple staircase climbs with a suitcase and a Brompton, but thankfully there were lifts, so it wasn't that bad. However, the commuter train was crowded with locals and did not have luggage compartments. I stacked my things in a corner near one of the exists, found a seat from which I could keep an eye on it, and hoped for the best.


At length we arrived in Belfast. I expected a busy station and a rush to get off the train, but there was neither. No one shoved me or even expressed annoyance at my things being piled in front of an exit. My suitcase was promptly placed on the platform for me by a huge hand whose owner I didn't even have a chance to glimpse, and I quickly grabbed the bike, worried that who-ever tried to help with it would try to pick it up by the (bottomless) bag. 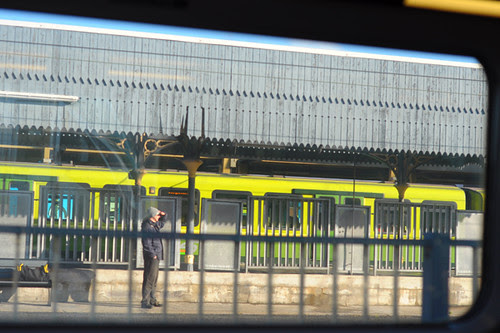 The Belfast Central Rail Station is very small. There is a ticket stand, two tiny coffee shops, and two bank machines: one dispensing pounds sterling, the other dispensing euros. The one dispensing pounds was out of order. As luck would have it, I hadn't brought any cash in GBP, figuring I'd easily withdraw it here. So I bought a coffee, paid with a 20 euro note, and got the change back in pounds. A few others had the same idea and the coffee shop became the currency exchange booth.

Speaking as a visitor, it felt a little disorienting that there was nothing acknowledging a border between the Republic of Ireland and Northern Ireland, and yet there was suddenly a different currency system. A local radio station was playing, and in between songs the announcer said something like "the weather across the United Kingdom is beautiful today" and that too felt odd, since at no point had there been signs or announcements mentioning the United Kingdom. It's hard to explain, but the dichotomy feels confusing. 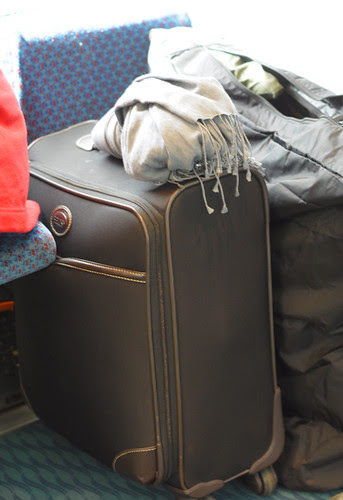 At the Belfast Central Rail Station, I bought a ticket for the local train to a place called Ballymena, which was the closest train station to my destination. These trains also ran very frequently, which impressed me given how sparsely populated County Antrim is. At the end of each train car, there was a section dedicated to bikes and baby strollers, with liftable seats. I easily stored my luggage there. The train route from Belfast to Ballymena is mostly inland, and there I saw saw some light industry and some farms. The landscape in this area looked a little stark compared to the Eastern coastline.

Up until this point it had been sunny, but as soon as the train stopped at Ballymena and I disembarked, it began pouring. Thankfully the Ulster Bus terminal was just across the road and it was covered. I carried my luggage there and found the Ballycastle bus stop. According to the schedule posted, the next bus was due to arrive in just 5 minutes. I was alone in the terminal except for a man in his 60s, who was pacing back and forth nearby. So far in Ireland, I have found it impossible to occupy the same space as someone else without ending up having a chat with them, and this was no exception. Within minutes I learned that the gentleman was a retired policeman who lived in the area and enjoyed a free bus pass on account of being a pensioner. Glancing at his watch, he gleefully announced that my bus was already late and that I was lucky if it showed up in the next half hour despite was the schedule said. "He's probably stopped for a sandwich, or having a chat with his mate," the man speculated cheerfully. However, the bus pulled up only a few minutes behind schedule.

Incredibly, it looked like I was to be the only passenger and the driver suggested that I simply toss my luggage onto the front row of seats. That is what I did, then sat down next to it. 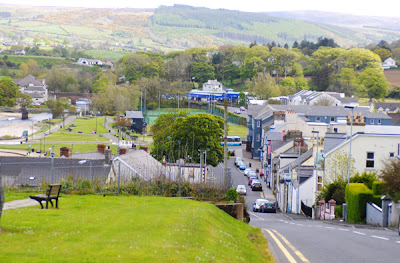 We traveled 27 miles from the inland town of Ballymena to the coastal town of Ballycastle, as the weather alternated between glorious sunshine and dark skies with pelting rain. We passed mostly farmlands with lots and lots of baby lambs. Occasionally there was a village center, then back to lambs. They were beautiful and fluffy and I began to get sleepy counting them.

As we approached the coast, the driver asked me where I wanted him to stop. This sort of stunned me, but he assured me that he had nothing better to do and might as well take me to my door so that I didn't have to walk. As a dramatic view of the sea opened up in front of us, I told him the address and that is where he dropped me off.

And so finally there I was, with my suitcase, my Carradice bag and my Brompton, ringing the door bell of my new residence. At this point I was utterly exhausted. But all things considered I think the trip went well. I left Dublin at 7:40am and arrived at Ballycastle just past 12:30 in the afternoon. I managed fine with my luggage, and now here I am settled in and with my own bike on the Antrim Coast.

The transportation system in Northern Ireland is impressive as far as density of coverage and the frequency with which the local buses and trains run; I had not expected anything nearly this good. For anyone interested in traveling through County Antrim, you can definitely do so without the hassle of renting a car. Prices for buses and trains are reasonable, and the stops take you not only to local village centers but also to remote scenic locations along the coast such as the Giant's Causeway. Traveling with a folding bike should not be a problem, especially if it's one that folds up as small as the Brompton. For anybody considering visiting the Antrim Coast in this manner, I highly recommend it.
Labels: Brompton Ireland small wheels travel