Through the Hedge Backwards 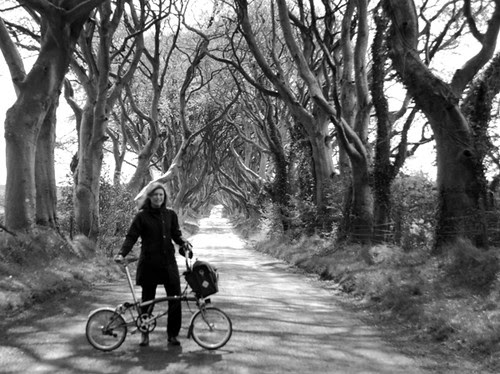 On Monday morning I went on a scouting ride to the Dark Hedges. The site is just outside the village of Armoy, about 10 miles inland from where I am staying. The inland roads here are flat-ish by local standards. The weather was looking good. It would be a nice and easy ride. And of course, I would finally see the mysterious old trees. I had elaborate photographic plans for them. 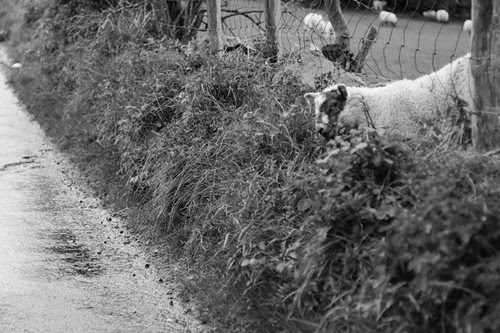 I set off after having breakfast in town. As a reader has astutely noted after a previous post, every exit from Ballycastle is uphill. I picked one that was relatively mild - though not the mildest, as I wanted to avoid the congested main road that leads out of town. The climbing began straight away. 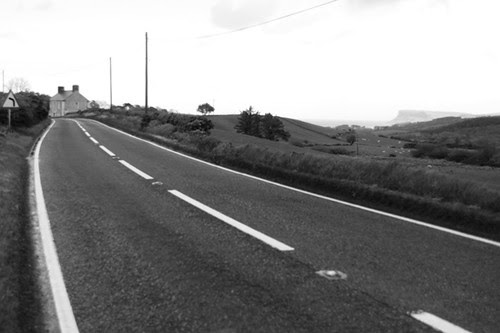 The terrain in Antrim is difficult to describe to someone who has never been here. Coming from New England, it was a jolt to my system. We do have hills in New England of course, but they are "rollers" mainly - relatively short, if steep, ups and downs where the momentum from a descent can be used to get up the next hill fairly easily. If we want more serious hills than that - either steeper or more sustained climbs - we have to seek them out. And almost any route involves plenty of flat stretches as well, providing opportunities to rest from climbing and descending.

Here in Antrim it is rather different. Most routes I have ridden so far have consisted of long climbs at a mild grade, punctuated by shorter but steeper climbs. There are almost no truly flat stretches, along the central part of the coast at least, no opportunities to rest. It is either a long up or a long down. Even at a mild grade, sustained climbs are draining for someone who is not accustomed to them. Being used to New England terrain, I have learned to "attack" hills, but that approach does not work here. When there is no end in sight, attacking just saps energy - it is far better to relax, get into a low gear, settle in, and spin while enjoying the view. 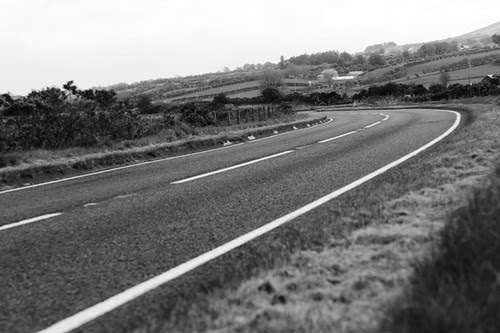 The landscape en route to Armoy is pretty enough. But on the coast of Antrim one soon gets spoiled with astonishingly dramatic views, and these were fairly plain in comparison. Farms mostly, stone walls, lots of adorable lambs basking in the sunshine.

The morning was a sunny one, but the skies were a dark slate-gray. The combination created a moody landscape that I kept wanting to stop and photograph. But I decided against taking photos until the return trip, because I wanted to make it to my destination while the weather was good. You never know here from one hour to the next. 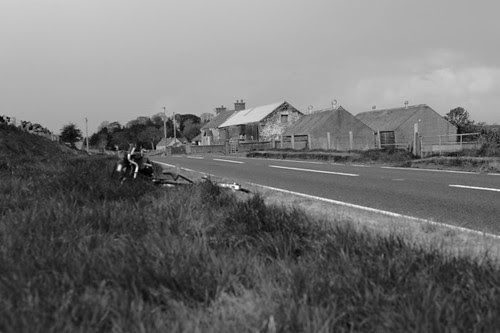 Still, half way through I was seduced by a particularly fetching view of heavy skies over a dilapidated farm house. I could not help myself and stopped to take a quick picture.

No sooner than I took out my camera and composed the shot, the sun disappeared. Now it was just the dark sky, and the scene looked rather dismal. As I debated whether to wait for the  sun to re-emerge or get back on the bike, it began to rain - so suddenly that I barely had time to shove my camera back inside the handlebar bag.

And then I felt something sharp on my face. What the...?

All at once, it was hailing. Hard. The morning light disappeared entirely as shards of ice pelted the earth - and me - with violent force. At first I was too stunned to do or even think anything. Then I began to panic. I had stopped in the middle of nowhere, with the nearest settlement 5 miles away in either direction. There was no shelter here - no trees, no canopy of any kind. The dilapidated farm house was separated by a barb wire fence, so I could not hide out in it. The temperature kept dropping. The hail kept falling. "Am I going to perish here?" I thought. I did not know what to do.

But then I realised... that I didn't really need to "do" anything other than pull up the hood of my raincoat. I had dressed warmly. I was wearing a waterproof coat and shoes. Everything was fine. I could simply enjoy this natural phenomenon... and hope there would be no lightning. 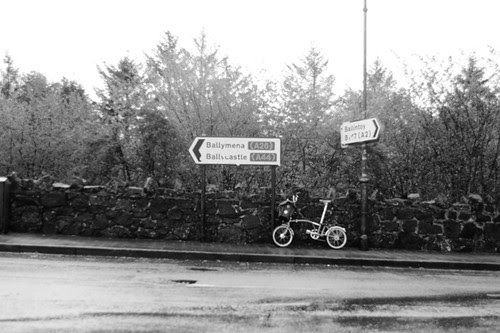 Thankfully, there wasn't. The hail soon let up and it was just the rain now. I got back on the bike and soon reached the village of Armoy. The Dark Hedges would only be a few miles from here.

I should mention that I had seen no other cyclists on this route up to this point, and very few motor vehicles had passed me outside of settled areas. It was just me, all alone, in what was now almost comically terrible weather. 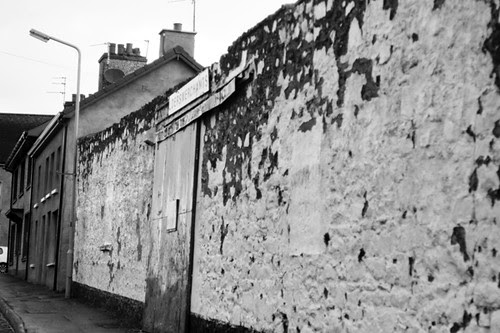 When I reached the village of Armoy, it looked eerily abandoned. Houses on the main street boarded up, shops and pubs closed. Finally I passed a small grocery store that was open and came in to get a hot coffee from the machine. Nine Inch Nails played on the radio, contrasting wildly with the quiet shuffle of the two elderly patrons.

The pale, lanky teenager at the cash register (ah that explained the music) took an interest in my "wee folding bike" and confirmed the directions to the Hedges. He then refused payment for the coffee - which I have found happens here often. I left the money on the counter anyway, in case one of the other shoppers was short on change. 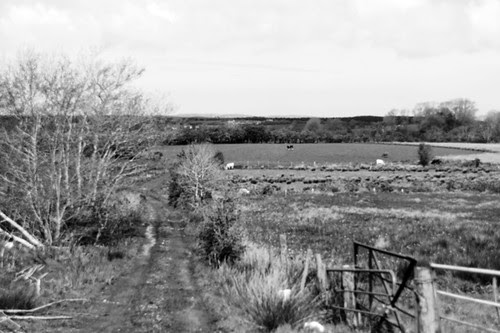 It continued to rain, though less violently, as I turned onto Gracehill Road, then finally Bregagh Road. On the corner an old man was sitting inside a bus shelter - a solitary figure in an otherwise desolate landscape. Simultaneously we waved to one another as I cycled past.

Now the road grew narrow and the vegetation wild. I began to climb a tedious hill as rain obscured my vision. I thought that I'd be able to see the famous trees in the distance by now and that this sight would at least encourage my progress, but the top of the hill blocked my view of what lay further. I realised how exhausted I was at this point from all the climbing I had done on this "flat" route, and from the rain, and from the cold. Honestly, I just wanted to get it over at this point and was no longer even excited about the Hedges.

But just then, at long last, I crested the hill. And at that exact moment the sun came out. And the rain turned into hail again. And that is when I saw them. 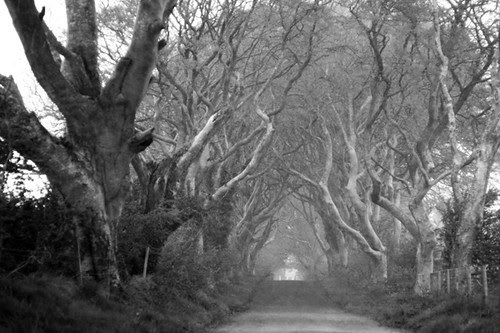 The Dark Hedges - in the hail, fog, and sunshine simultaneously.  Descending under the canopy of twisted  branches was like passing through a tunnel. I then turned around, propped the bike against a tree, took out my camera and spent the next hour taking photos - about 500 of them, capturing the ethereal sight in a variety of weather conditions. "Four seasons in  day," as they like to say here.

I've since visited the trees again, and I might write about them in more detail later. But on this occasion it was really a matter of the journey more than the destination. The experience of seeing the long-awaited Hedges as I crested that hill... no photo can capture it.

It was not the weather for tourists, but at some point a car drove past and pulled over on the side of the road. Just as the rain finally stopped, a couple jumped out to take pictures. Seeing me there, they asked whether I could take one of them both. I did, after which they took one of me. Rather appropriately, I look like I've been dragged through the hedge backwards. What a ride this turned out to be.
Labels: Ireland ride reports travel