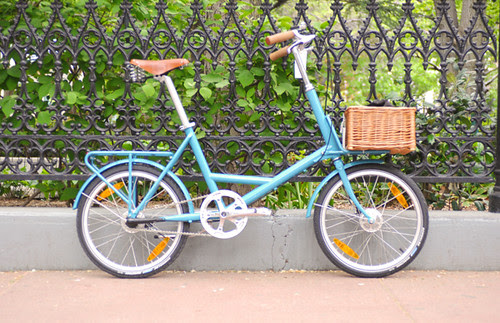 In my recent post about choosing a transportation bicycle one topic discussed in the comments was the available options for those who live in walkup apartments yet want a fully equipped upright step-through transportation bicycle. The thing about transportation bikes is that they tend to be on the large and heavy side, thus inconvenient for hauling up and down several flights of stairs on a daily basis - especially for those without a lot of upper body strength. The solution some might consider is a small wheeled bike. Not necessarily a folding bike, but what in England was at one time called a "shopper" - a bicycle with small wheels and a sturdy frame designed to withstand weight, equipped with fenders, racks and baskets.  The Raleigh Twenty was probably the most popular of these and now there are two new bikes from England that channel its features. I rode them briefly at Adeline Adeline when I visited New York. 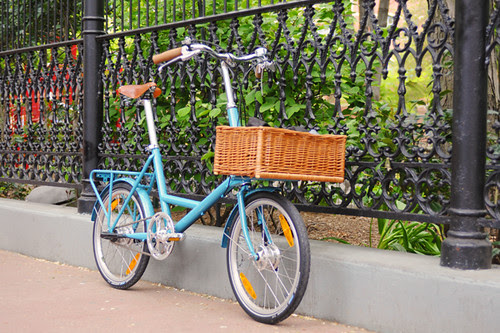 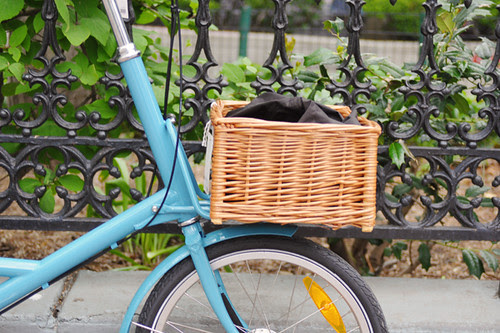 The front rack is attached to the frame at three separate points. It does not move when the wheel moves and it sits low to the ground, which stabilises the weight and does not noticeably impact handling. 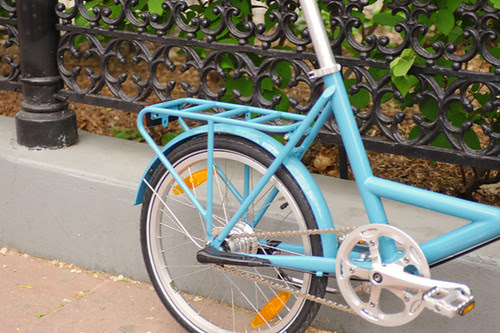 With the combination of front and rear rack, this bicycle can carry as much weight as a full sized transportation bike, and the frame is built to withstand that. But the bike itself is not heavy when compared to a full sized upright step-through, and being small it is quite maneuverable through tight spaces. Carrying it up and down the stairs is no problem. The low standover provides the same benefits as a full sized step-through frame. And the short horizontal bar above the bottom bracket functions as a convenient handle for picking up the bike. 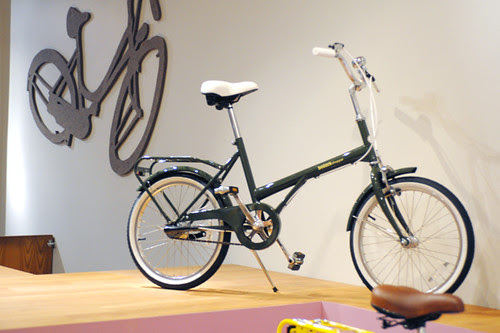 While I was not able to get outdoor shots of the Bobbin Shopper, I did ride it briefly. The frame bears a strong resemblance the original Raleigh Twenty, but is lighter with tubing that is not as heavy-duty. Like the Wren, the Bobbin Shopper is equipped with 20" wheels, a 3-speed hub, fenders, a rear rack and an optional front basket. Unlike the Wren, the front brake is a caliper rather than a hub brake, there is a plastic saddle in place of the Brooks, and the handlebars are not swept back. The unicrown fork differs from the lugged crown fork on the Wren. 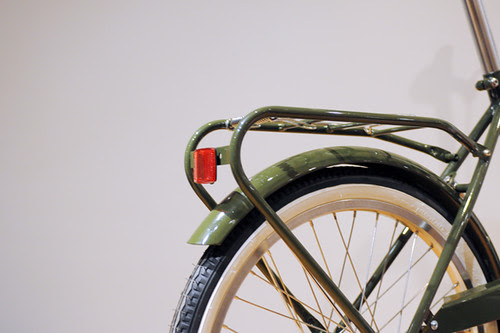 The Bobbin Shopper's frame is not designed to carry quite as much weight as the Wren and the craftsmanship is not on the same level, but these things are reflected very fairly in the price difference: The Wren retails for $1,150, whereas the Bobbin Shopper is priced at $550. 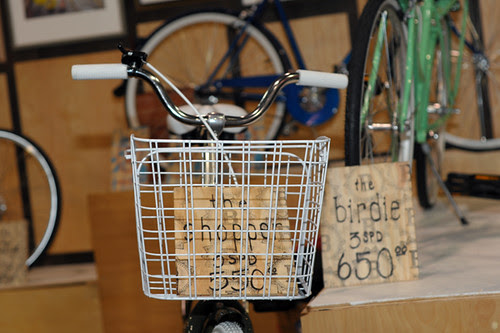 At these different price points, the basic idea behind the bikes is the same: small wheels, simple frame design, low stand-over, easy to carry, rack in the rear, optional basket in the front, hub gears. Both bicycles are made in Taiwan. And both bicycles weigh around 30lb, depending on how you set them up. One thing I wish is that each manufacturer offered an optional dynamo lighting package and it's a pity they do not. 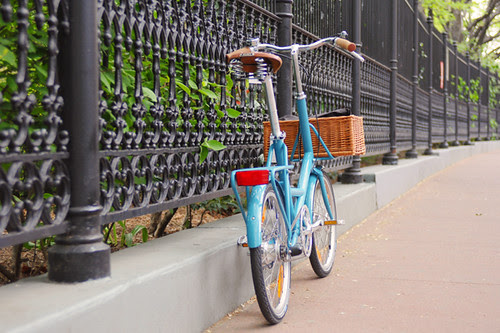 Having ridden each bicycle briefly, my impressions are not extensive, but I'll share them such as they are: The Wren is undoubtedly a smoother, more luxurious ride. It is simply a higher quality build. But it also felt a little peculiar in both fit and handling and took some getting used to. The frame is very long and I felt quite stretched out and leaned over even with the upright handlebars. The Wren's handling seems optimised for a front load and with the basket empty it took me a bit to get used to it. The Bobbin's fit is more standard and the handling was more intuitive for me on first try. I do not feel that the small wheels are a limitation on either bicycle for city riding. And both bikes felt delightfully maneuverable. For those choosing between the two bikes, I would say it comes down to price point and fit preferences.

Not being folding bikes obviously means that neither bicycle can be made more compact than it already is, save for lowering the saddle. But one advantage of the non-folder is that the bike can be locked up outdoors in the city just as easily as full-sized bikes, whereas folding bicycles can be tricky to leave outside securely. I am a fan of this breed of bicycles and am glad more of them are emerging. What are your thoughts regarding non-folding small wheeled "shoppers"?
Labels: bicycle reviews small wheels test rides