Off Road on the Edge of the World 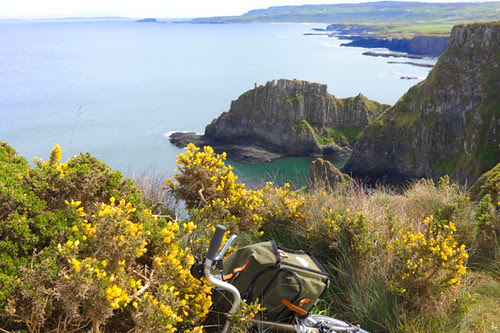 A couple of days ago I accidentally completed a 6 mile off road ride along the coast of Antrim. Without question, this was the most challenging bike ride I have done to date. I would not have attempted it had I known what was in store for me. But it was also the most beautiful, breathtaking trail I have ever been on. 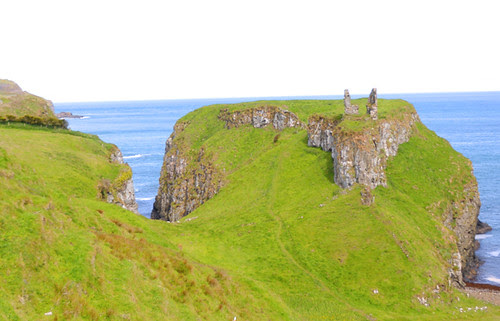 It happened like this: One morning I decided to ride to the Giant's Causeway, which is about 12 miles away. I took the direct route on the coastal road. The first part was a tedious climb, then a long descent - both with glorious water views. When I was almost at the end, I spotted a sign for Dunseverick Castle and stopped to have a look. The setting is very interesting, and I walked around a bit photographing it. The light kept changing every 5 minutes, so the colours in all my pictures from this day are crazy and I decided to leave them that way. The landscape here really can look neon green one moment, then golden or drab olive the next. 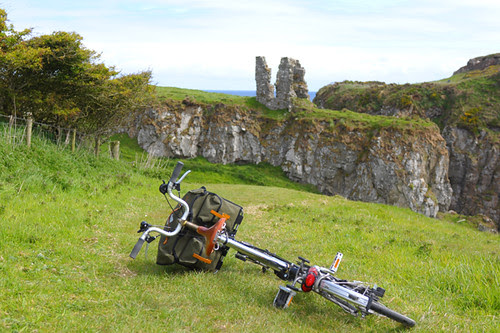 Like most structures described as "castle" along the coast of Northern Ireland, Dunseverick Castle is actually a ruin. There is an overview platform from which visitors can observe it from the road (people do coastal driving tours here...). And next to this platform is a sign indicating that there is also a walking trail - leading down to the castle, then continuing right along the coast to the Giant's Causeway. 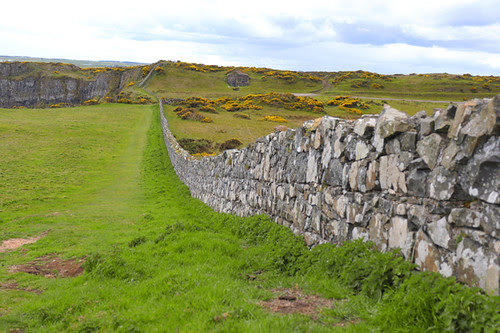 I looked at the trail. It was grassy and appeared pretty tame. The Giant's Causeway didn't seem that far off. So I decided to go for it on the bike. 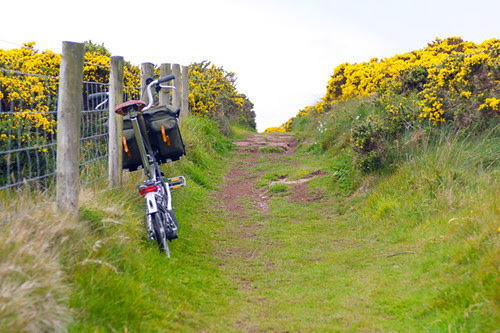 The trail ended up being 6 miles long, with no exit points along the way. As far as cycling, I would describe it is as not for beginners. I spent maybe 40% of it on the bike and the rest walking, or crawling. The initial stretch of grass quickly narrowed to a rocky, twisty single track along the edge of a massive cliff overlooking the Irish Sea. 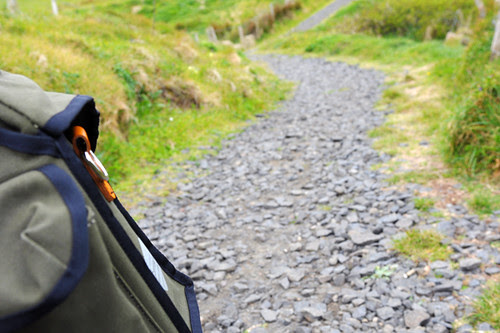 There were also long stretches of loose, chunky gravel. There are no flat, straight sections along this trail - it is either uphill or downhill, and all twisty. Honestly, I found the terrain extremely challenging. Going toward the Causeway, the trail is mostly downhill and the ground beneath me was unstable due to the mud, roots, rocks and loose gravel. It was scary to experience this combined with constant twists and turns as I cycled alongside a cliff. Also, at some point the hub gearing on my Brompton started coming out of adjustment (now fixed), and I did not always have use of my lowest gear. This made some of the uphill sections on loose gravel impossible, so I walked them. I also walked a couple of the trickier downhill stretches. An experienced mountain biker could have maybe done 80-90% of the trail on a bike, but I am far from that status. 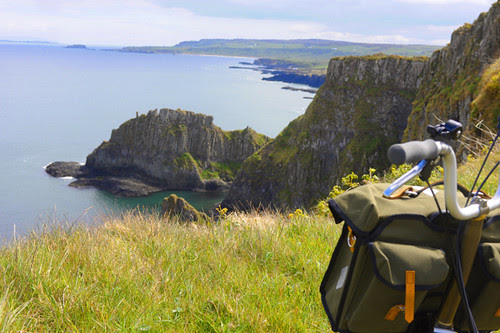 It did not bother me to walk with the bike when that was what I had to do. I had a heavy bag with me, and I was glad to roll it along on wheels rather than carry it on my person, as I would have had to do had I chosen to hike this trail. Despite the stunning views along this trail, there were not many hikers around. Most of the time I was completely and utterly alone, with no other human forms visible in any direction. I encountered three groups of ramblers total, and they all expressed horror at seeing me with a bike. "You need to turn back," a German couple warned, "it is not bike territory ahead."  I knew exactly what they meant, because I had already gone through that kind of territory. 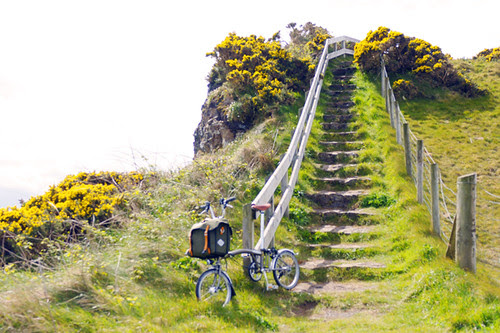 Along this trail there are occasional stairs built into the hills. They look like this, sometimes worse (longer and steeper). There was one particular set of stairs where the grade was too steep to walk upright, so I had to sort of crawl up them with the bike on my back. 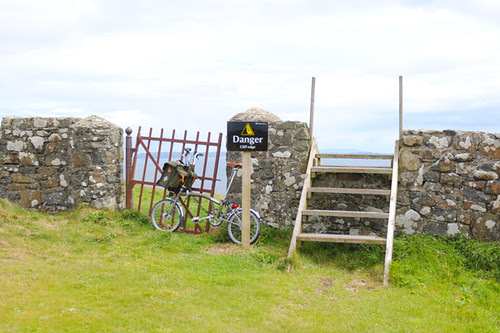 Since the trail passed through farm territory, there were also occasional stone fences with stiles to climb over - essentially wooden ladders placed over the fence. These were a little shaky, so I had to hold on to a pole with one hand (taking care not to grab the barbed wire instead - of which there is lots) while carrying the bike in the other. All through this, it was of course freezing cold and raining intermittently. 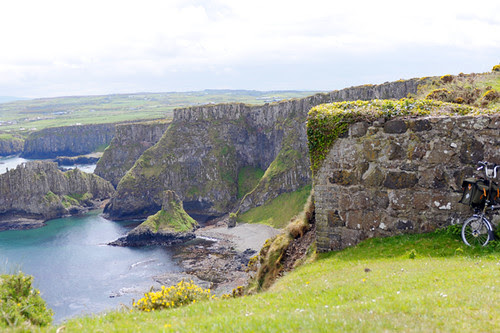 Well, what can I say. One must have a sense of humour about things like this. Sure, the description of the trail could have warned there would be crawling and flights of stairs involved. But that would have spoiled the surprise element, wouldn't it. Ultimately it was more engaging to "discover" the trail this way rather than reading all about it in a guidebook first. 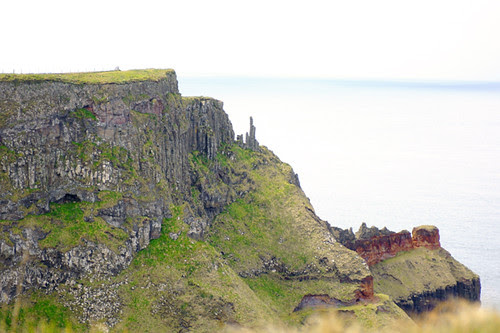 The day was hazy and my photos don't do the landscape justice. But this hidden gem of a trail showcases the raw beauty of the Antrim Coast better than any other site I have visited so far.  It is extreme. It is dizzying. And not just the heights alone, but the colours, the smells, the forms and textures. 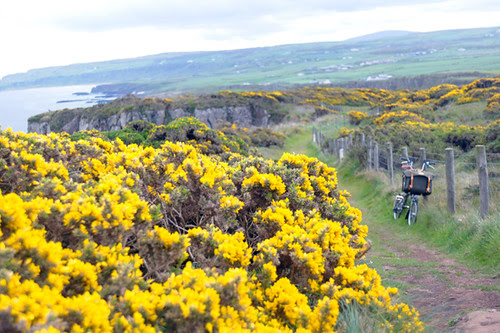 And it truly does feel like the edge of the world: The trail is set back from the road by endless glens. You cannot see civilisation; only the edge of a cliff on one side of the trail and pastures on the other. 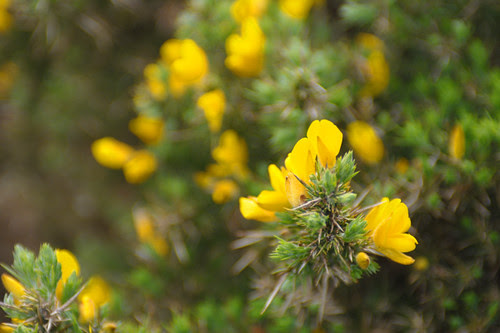 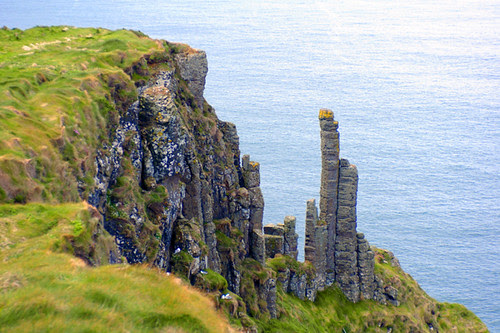 It took me over 2 hours to get to the end of the trail, including all the climbing over fences and stairs, as well as constant stops for photos. By the time I reached the end point, I was exhausted and badly in need of food. The funny thing is that when I got to the Giant's Causeway itself it was absolutely unphotographable: Every inch of the majestic formation was covered with tourists. How odd that people will drive to it just to get out of the car for 5 minutes and have their picture taken on the rocks, but ignore the stunning trail that showcases the full extent of this area's beauty. Also, the entire site next to the Causeway is covered in construction at the moment. They are building a new, enormous visitor's center and while this is happening the area is a chaotic tangle of construction crews and tour buses and hordes of disoriented visitors. Dust flying everywhere. Yikes. I quickly bought an ice cream and got the heck out of there, deciding that I'd come back to see the Giant's Causeway at 6am next time to avoid the crowds. 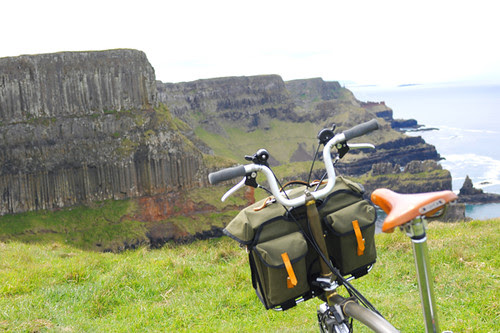 The trail from Dunseverick Castle to the Giant's Causeway is technically a hiking trail, not a bicycle path. In truth, it is more suitable to hiking unless you have nerves of steel and serious cyclocross skills. Still, I am glad I did it this way and I admit that I feel a tremendous sense of accomplishment (I also still feel wrecked 2 days later, but that is another story). As far as the bike's suitability, I find that the Brompton rides surprisingly nicely off road and is easy to control on downhill turns, so if anything I am more comfortable on challenging terrain on this bike than I would be on others. Another obvious advantage of the Brompton on a ride like this, is that it is small enough to carry when necessary. I would not have been able to drag a full-sized bicycle (especially a mountain bike) up and down those stairs and over those stone walls. Next time I visit this trail, I might hike - or I might do it exactly the same way but try to stay on the bike more. This was by far the most difficult ride I have ever done, but it was also the most rewarding. When the two go hand in hand, it is pure magic.
Labels: Brompton Ireland ride reports trails travel unpaved