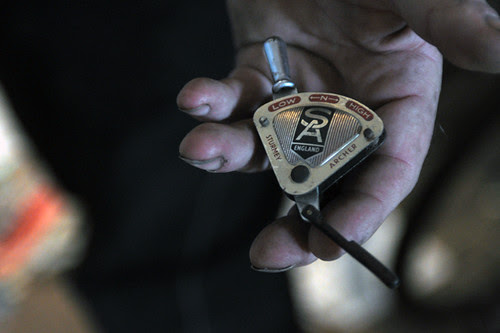 Oh, that sweet acronym that makes collectors tremble with anticipation! NOS stands for "new old stock." Parts that survived generations unused and untarnished. Parts that look and function now as they did on the day they were new.

It is not often one sees the status NOS preceded by a date in the 1930s. But the things I have seen appear in the hands of collector Chris Sharp over the past week... new old stock chased rubber grips, rod brake handlebars, carbide lamps, original roadster bells, sculptural quadrant shifters... Stunned out of my wits I could only wonder where on earth such things come from 80 years past their hey day.

Up until a few years ago there were bicycle shops in Ireland and the UK that still had spare parts left from way, way back in the day. Usually these shops were run by generations of the same family, never changing owners or locations, which is what made such stockpiling possible. Bikes that went unsold and parts that went unused had been piling up in the cellars and back rooms of these shops for decades, undisturbed. Then one by one, these places closed. And when they did, they would liquidate. Local collectors would then buy out a shop's entire inventories of parts from specific periods or manufacturers. Some bike shops owners were themselves classic bicycle enthusiasts, in which case unsold inventories from decades past turned into personal collections.

It was sad to learn about the last of the old bicycle shops closing in Northern Ireland. But also good to know that there are locals who are dedicated to preserving the things salvaged from them.

I used to think that the purpose of the NOS market was to feed a collector's high, and did not really appreciate NOS bikes and parts myself. After all, I ride all my bicycles, so anything NOS would be wasted on me - its status immediately obliterated through use. But now I understand that new old stock has value: It affords a rare opportunity to appreciate vintage bicycles not just from our current perspective - as old, well-used things covered in mud and rust - but in their original splendor, as the highly coveted machines they once were.
Labels: vintage