Leather Saddles from Cardiff and VO

A few years back, both Velo Orange and the Merry Sales/ Soma/ IRD group began releasing Taiwan-made leather saddles, which have been available as less pricey alternatives to the racing, touring and commuting models from Brooks of England. The saddles from Velo Orange are VO-branded, and the saddles from Merry Sales are sold under the Cardiff brand. Though both companies use the same manufacturer (Gyes) and offer equivalent models, they are not identical; subtle differences in specs are apparent. Still, the overall construction and design are the same. Since many have been wondering about the feel and quality of these saddles, I thought it would be useful to describe my experiences. 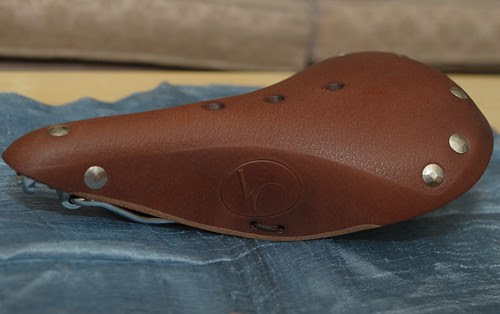 My first experience with a VO Saddle was when Velo Orange donated one for the vintage touring bike give-away I was doing last year. The model is what they call the Model 3 Touring and is equivalent to a Brooks B17 in width and general shape. The VO Model 3 features chromed rivets, side lacing, saddlebag loops, and a pebbled surface. 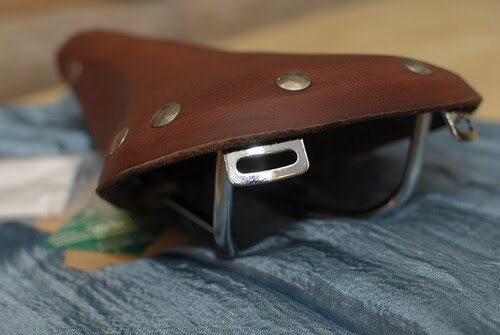 When the saddle arrived and I took it out of the box, I was initially not impressed. I thought the feel of the leather was somewhat "cardboard-like." To the touch it felt both stiffer and more brittle than a Brooks saddle. The underside had a grid-like surface to it, almost as if the material was some sort of compound. I did not have high hopes for what something like this would feel like to ride. 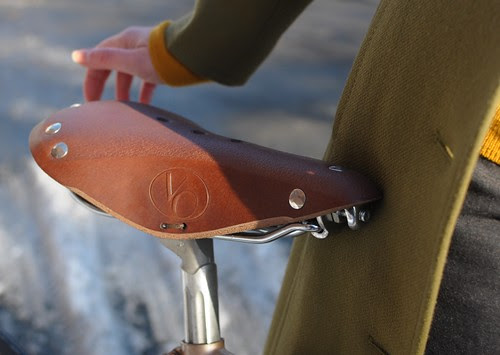 However, my expectations proved wrong once I started test riding the bike on which the saddle was fitted. Saddle preferences are highly personal, so I can only say that I found the VO Model 3 extremely comfortable. It did not need breaking in. In action, it felt neither too stiff nor too soft. The width and shape felt just right for my sitbones on a roadbike set up with the bars level with saddle height. The nose did not dig into any sensitive areas. My first ride on the saddle was 20 miles without padded shorts and it felt great. It felt equally great on subsequent test rides. As this was not my own bike, I was not able to provide feedback as to how the saddle felt on longer rides and how it held up over time, which is why I did not post a review. But based on my limited experience, I was impressed and made a mental note to go for this model next time I needed to buy a touring bike saddle. The VO Model 3 is not as luxurious as a Brooks B17, but to me it felt more comfortable out of the box. 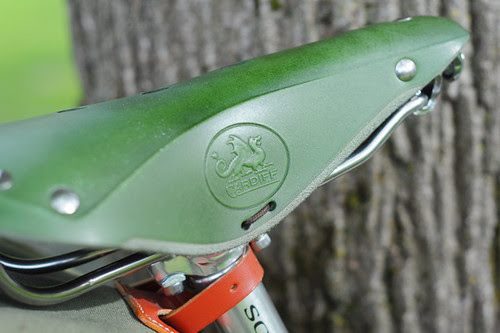 When Soma offered to send me a Smoothie roadbike for review earlier this spring, we discussed specs and I asked them to include a green Cardiff Cornwall saddle. I was curious whether this saddle would be suitable for a more aggressive roadbike set-up, and I also wanted to see how it compared to the VO version I'd tried earlier. Overall, the Cardiff Cornwall looks very similar to the VO Model 3, except for the colour choices. Also, the Cardiff has a smooth surface, whereas VO's is pebbled. There might be other subtle differences in design, but I have not noticed them. 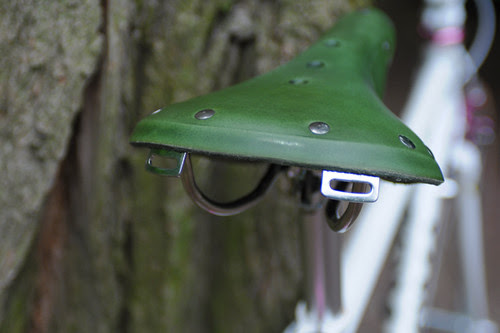 Like the VO saddle, the Cardiff Cornwall features chromed rivets, side lacing and saddlebag loops. The width and shape of the Cardiff Cornwall saddle feels just as I remember the VO Model 3 - perfect for my sitbones. It needed no breaking in. Nothing hurts, the longest ride so far being 30 miles. The Soma Smoothie is set up more aggressively than the vintage touring bike I'd test ridden with the other saddle, with the handlebars 1" below saddle height. However, the Cardiff Cornwall does not feel too wide for the bike. The saddle feels great to ride on. 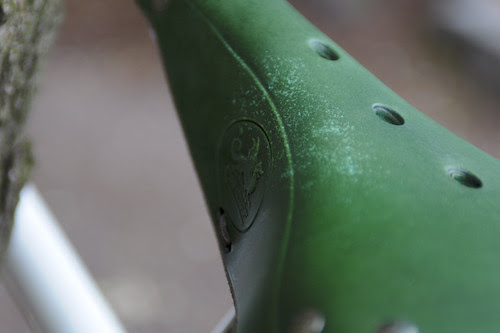 As far as the quality, look and feel of the leather, my impressions are the same as with the VO: cardboard-like to the touch, with a general sense that the materials - including the leather, the rivets and the rails - are not as high-end as what Brooks uses. Additionally, the green dye on the Cardiff has begun to rub off after some use. Good thing I wear black cycling shorts.

All things considered, my impression is that yes there is a difference in the quality of materials used in the Velo Orange and Cardiff saddles versus the equivalent Brooks models. However, the real consideration for me is how a saddle feels in action. While I have good luck with Brooks saddles on upright bikes, for some reason I have bad luck with them on roadbikes. On the other hand, the Velo Orange and Cardiff saddles work surprisingly well for me in that context. This, combined with the reasonable pricing, make them attractive alternatives to the other leather saddles out there. If you are having trouble with the fit of other saddles, these are certainly worth experimenting with. It is good to have options at different price points.
Labels: product reviews saddles Soma Velo Orange