Cooler on a Bike 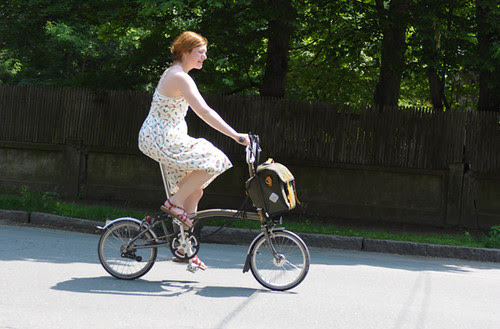 There are those who dream of tropical climates and rejoice at summer's arrival. And then there are those like me, who shudder when the temperature begins to rise past 70°F. As May transitions into June, I am really having to give myself pep-talks to face the upcoming three months of scorching sunshine and suffocating humidity.

But entering my 4th summer on two wheels, one source of consolation is that at least getting around by bike will keep me cooler than other means of transportation. To many non-cyclists this seems counter-intuitive, and I understand why: They can't get past thinking of cycling as strenuous exercise. "How can you bike in this heat when you can hardly walk down the block without passing out?"

Well, there is no mystery. Part of it is simply that cycling lessens my exposure to the heat and humidity in comparison to walking, by getting me there faster. But more importantly, moving through space at cycling speed generates air flow that feels like a breeze and makes the weather easier to tolerate - something that does not happen at walking speed. The trick is to ride at a pace that is fast enough to result in this effect, but not vigorous enough to the point where cycling becomes exercise. Wearing flowy clothing that allows air to circulate enhances the breezy feel further. Over the previous years I have more or less perfected my summer cycling pace and attire, and don't even sweat that much when I ride for transportation.

There are of course other forms of transport besides walking and cycling. But while modern cars have air conditioning, driving is simply not an efficient transportation option in most cities these days. There is too much traffic and getting around during peak commuting times is a nightmare. I know a local woman who regularly commutes to work for over an hour by car, when the same distance takes me a half hour to cover by bike. I don't have that kind of time to waste, and neither do I want to pay for the privilege of doing so. As for public transportation... First, you still have to walk to it. And if taking the bus, there is also a lot of waiting outside involved, often with no shade. Then inside it's hot and chaotic, with sweaty crowds pushing each other and standing nose-to-nose in stuffy buses and train cars. Maybe some can deal with it and are none the worse for wear, but I always emerge drenched in sweat and with frazzled nerves.

Of all the methods of transportation I've tried in the summer, cycling gets me to my destination cooler, more composed, and usually faster. It might be counter-intuitive to some. But cycling does not have to mean exercise and exertion. It can mean moving around at your own pace, with your own personal cooling unit.
Labels: summer cycling transport transportation options