By the Sea in Dún Laoghaire 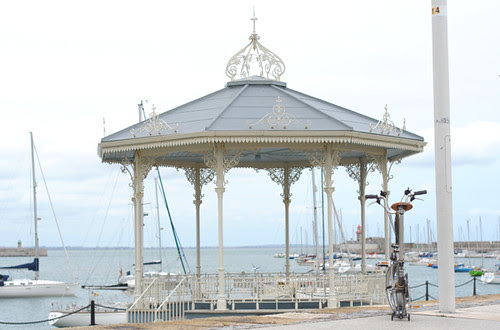 Pronounced "Dunleary," with an emphasis on the second syllable, Dún Laoghaire is a provincial seaside town in Ireland just south of Dublin. I am visiting family here before going north to County Antrim, and will return here again afterward before flying back to Boston. 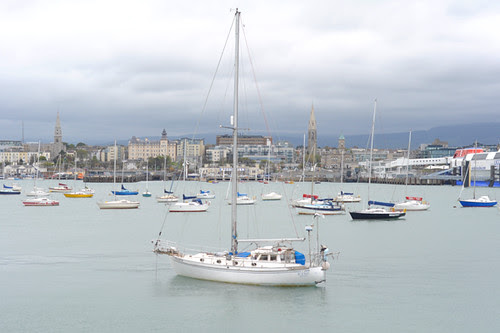 I love small seaside towns and was excited for this to be my first introduction to Ireland. Arriving to a new place, we never really know what to expect. This time the unexpected part was the familiarity. If you can picture a cross between Brighton, England and Portland, Maine with a touch of South Boston's waterfront area, you will be well on your way to forming a picture of Dún Laoghaire. Growing increasingly suburban as it stretches inland, there is a dense commercial center closer to the sea. Streets are generally narrow, with a system of even narrower hidden alleyways that are used as pedestrian shortcuts. The exception is the wide and highly traveled road that stretches along the waterfront. A sidewalk promenade follows the road with occasional interruptions and everything here is built on a large scale: a towering city hall, a string of grand hotels, an enormous modern theater. 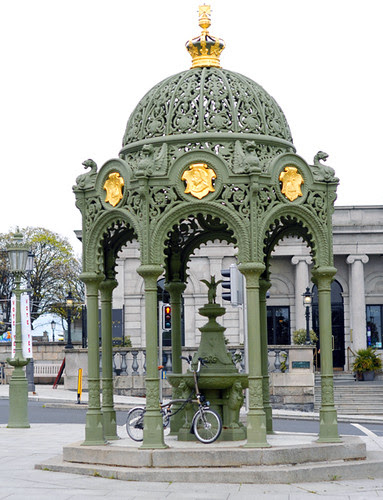 Dún Laoghaire is not an old town, and a lot of the design elements can be traced to the Victorian and Edwardian eras. Iron latticework, gilded pavilions, hotel walls painted in pastel hues. 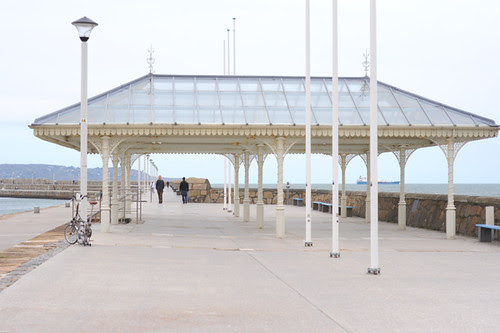 Walking along the waterfront, it is easy to imagine the heyday of this place. I can practically see the ladies in corseted frilly dresses strolling up and down the promenade with their parasols and lap dogs. 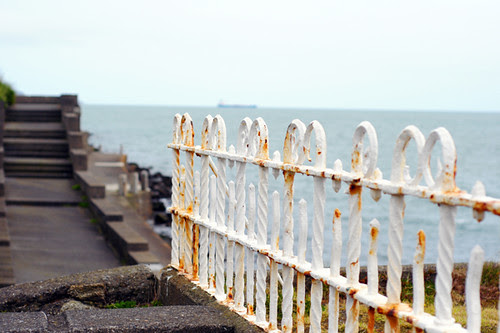 Of course now it all looks a little shabby. Peeling paint, rust. And on a drizzly weekday, the only people I saw along the promenade were hooded joggers and a couple of young mothers pushing strollers while talking on their mobile phones. 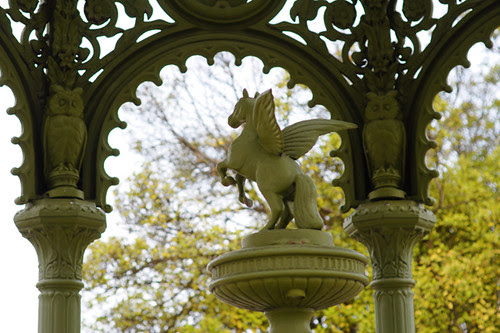 Not that this detracts from imagining what the place used to be and what motivated people to create things like this elaborate minuscule pavilion. 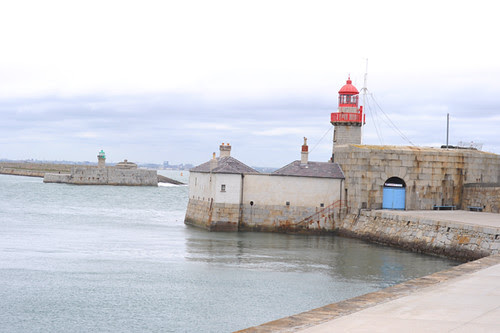 The distinguishing feature of the Dún Laoghaire waterfront is its two long granite piers. These start on the opposite sides of town, then curve inward until their tips almost meet. There is a red lighthouse on the East Pier and a green one on the West. It's as if they are looking at each other longingly across the water. 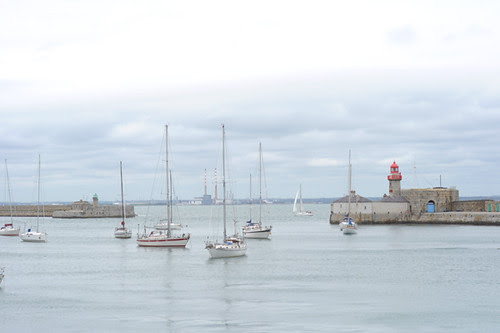 This charming view is, however, somewhat subverted by the intrusion of the Dublin Power station towers smack in between the lighthouses. You can see them in the distance here if you look closely. 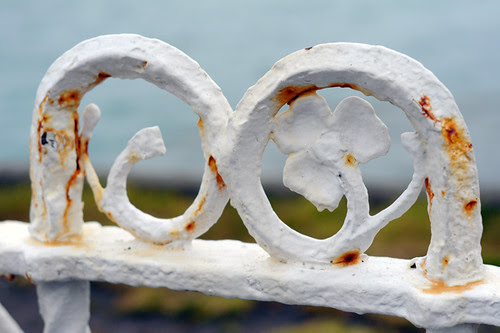 There is much more to Dún Laoghaire than this vast and quaint waterfront area, and in fact I haven't really described the town itself at all. But somehow the presence of the promenade, with its granite piers and rusting latticework and sea air permeates the rest of the town. The people are friendly, but reserved. An elderly man in a pub said to me that those who enjoy living here value anonymity. Otherwise they are miserable and can't wait to leave. So close to Dublin, this town does not feel as if it's anywhere near a capital city. It is its own universe, hidden in plain sight; a closed system. 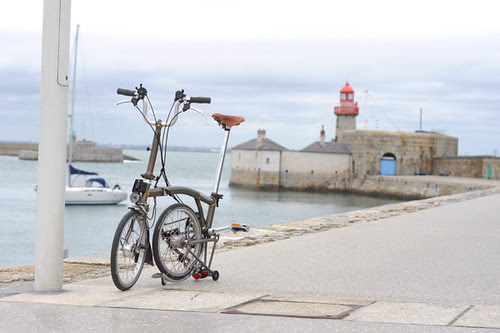 I have been cycling despite the non-stop rain, mostly for transportation and exploring. The cycling is so-so. No bike lanes at all, but the roads are mostly calm except in the town center. I am not entirely comfortable with the left-handed flow of traffic yet, so I am afraid to ride on busy streets and sometimes take the sidewalk (as do half the cyclists here it seems). Cycling along the endless East Pier in a light drizzle and enjoying 3/4 water views has been my most memorable ride so far. I don't mind the rain and the cold here, but it does make taking good pictures difficult.

Overall I am trying to decide whether I like it in Dún Laoghaire. Is this the sort of place I'd want to live? In theory, it really should be. It's got the sea, mazes of narrow streets, stone houses, lots of wild vegetation, privacy, and genuinely pleasant people. But for some reason, it doesn't quite pull at my heart strings. I am comfortable here and do not even experience my trip as being abroad so far. But I feel a little detached from this town. Tomorrow I take the train to the North of Ireland.
Labels: Ireland travel