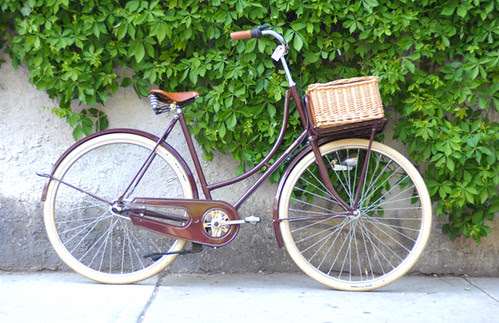 When I learned about Achielle Bicycles from a Belgian friend three years ago, I immediately wanted one - so much so that I contacted the manufacturer and considered buying one direct when I learned there was no American distributor. However shipping a single bike was expensive, and so Achielle did not end up being my first transportaion bicycle. But I remained interested in the manufacturer. Eventually they gained US distribution, but still I never heard of any bike shop that sold them. It was therefore entirely unexpected when I literally bumped into a wine-coloured Achielle Oma at Hudson Urban Bicycles in New York last week. I did not know they sold them, but there it was - the elusive bicycle I'd been admiring from afar all this time, just standing there and waiting for me to try it. 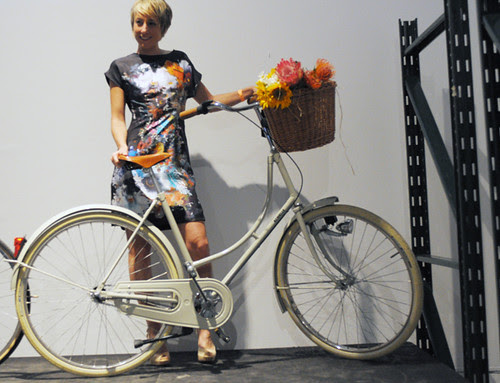 There was also a grayish-cream one in stock, being prepared for the New Amsterdam Fashion Show.

The owner of HUB had no idea who I was, but knew I had no intention of buying the bike and just wanted to write about it on some blog. The shop was hectic, with everyone running around getting ready for the New Amsterdam Show, and it was almost closing time. Still, he got the bicycle ready for me and was very helpful - much appreciated. Many thanks also to Nona Varnado, who introduced me to HUB and vouched that I was not a bicycle thief. I test rode the Achielle and just barely managed to snap some pictures before the light faded. 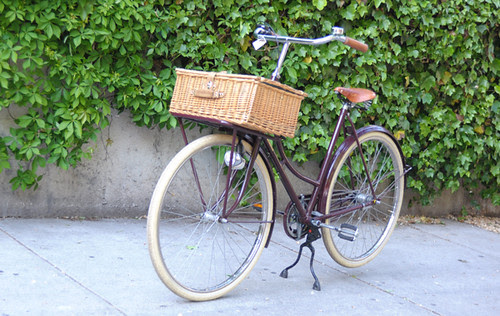 So what makes Achielle bicycles such a big deal? Well, it is this: As far as I know they are the only production Dutch bikes that are still handmade locally from the frame up. Even the tubing is produced locally, according to the manufacturer. Does local production mean a bike is better made than had it been outsourced to the Far East? Not necessarily. Quality depends on skill, method and tools, not on a factory's location. But there is something to be said for bicycles that are produced 100% in-house, from frame to paint to assembly. Pashley does it in the UK with English Roadsters and Achielle does it on the continent with Dutch bikes. They are part of the special remaining few and they keep local manufacturing traditions alive.

Achielle has been making bicycles in the Flemish region of Belgium since 1946 and you can read a summary of their history here. The paint is by Dija-Oostcolor - Achielle's parent company.  Because pretty much every aspect of production and assembly takes place in-house, a great deal of customisation is possible. But plenty of stock production models are available as well. 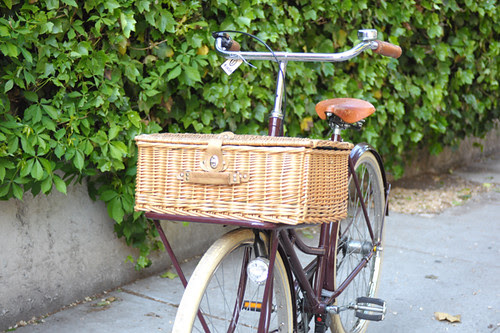 The model I rode is the Craighton Pick-Up Oma - a steel loop frame with 28" wheels, body colour fenders, chainguard and large front carrier. This bike was a 57cm frame, 3-speed with coaster brake only, fitted with cream tires, bottle dynamo lighting, double-legged kickstand, leather saddle and grips, and large wicker basket in front. 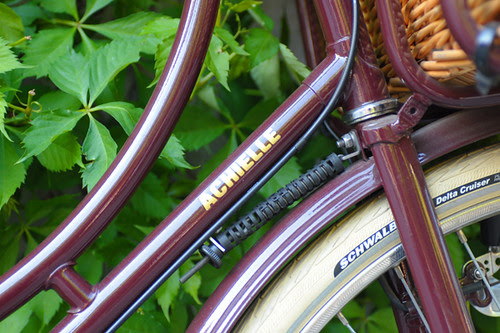 The Achielle Oma frame has all the features I value when it comes to craftsmanship. It is fully lugged, including the seat cluster, fork crown and even the loop connector. It also has the bolted rear triangle and the track ends in the rear that I prefer on a bike of this style. The frame is utilitarian and the lugwork is simple, there are no flourishes. But everything that I like to be there is there, and the quality of the finish looked excellent, with precise joints and no sloppiness or bulges anywhere along the frame. 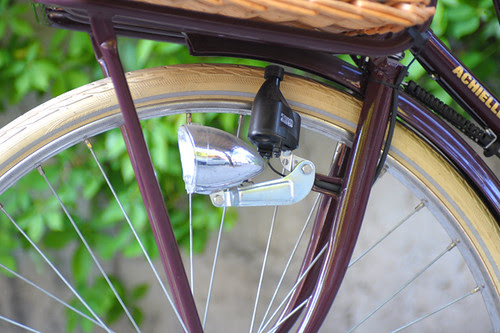 On a bicycle like this, I actually prefer to have a modern bottle dynamo to a hub generator, and Achielle has the option of a braze-on "arm" on the fork for this purpose. Both the bottle and the headlight attach there, making it possible to use a front carrier system without obscuring the headlight. 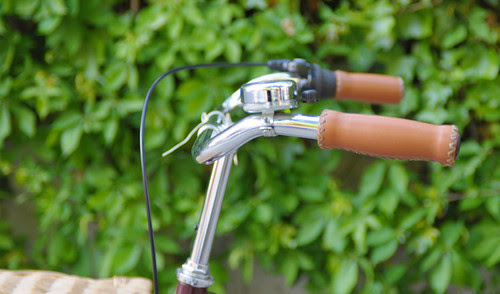 The classically high and swept back Dutch handlebars are near-identical to the set-up on my formerly owned 90s Gazelle. 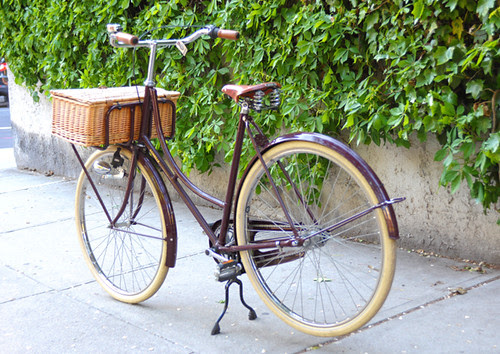 Although this particular model has a one-sided chainguard and not a full chaincase, models with full chaincases are available also. A tail light is mysteriously absent here, but it is pictured on the Achielle website.


I rode the Oma briefly along the quiet streets of the West Village. It was exceptionally smooth and, by Dutch bike standards, fast. I did not feel that the weight of the front carrier and basket (with my jacket and camera inside) affected handling. However, the lack of front brake was a problem for me and kept me from testing the bike's speed limits to the extent I would have liked. For those considering the bike, a front caliper can be easily retro-fitted and there are options for a hub brake as well, but obviously this could not be done in the short amount of time I spent with the bike. I would love to do a long-term review of this bicycle with better pictures and more nuanced observations. 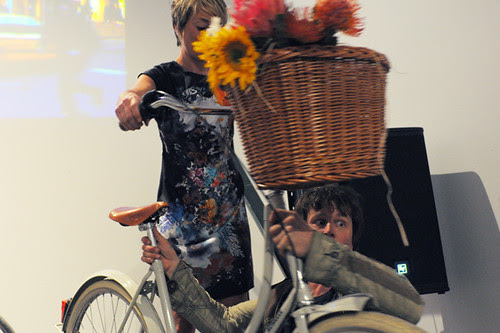 The Achielle Oma is a classic Dutch bike in every respect, including weight savings not being a priority. It was funny to watch the model who posed with the bicycle at the New Amsterdam Bike Fashion Show "hand" the Achielle to the assistant whose job was to carry it off stage. This big-boned beauty can weigh upward of 45lb, depending on size and what accessories it is fitted with. Like all Dutch bikes, the Achielle Oma was designed to be stored outdoors or in sheds, not carried. And it is certainly durable enough for outdoor storage, as well as suitable as a winter bike. 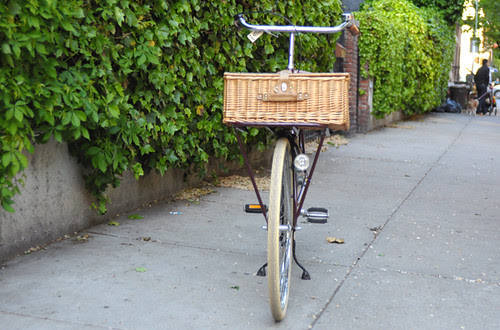 Priced at $1,450 for the model shown, the Achielle is not inexpensive. But it is handmade in Belgium from scratch, it looks well-constructed and it handles well. The price simply reflects how much it costs to do that, with only modest profits being made by the manufacturer, distributor and retailer. For me, it is worth it. For others, maybe not. It is good to have options. Were I in the market for a Dutch bike today, Achielle would be the one.
Labels: bicycle reviews handmade test rides