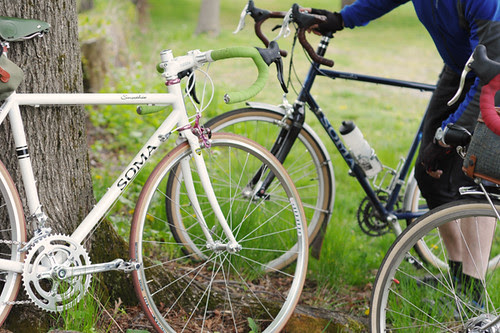 No sooner had I returned from New York over the weekend, than the Soma Smothie I'd been anticipating for review had arrived. So I took a break from the loop frame delirium of the New Amsterdam Bicycle Show and immediately took it for a spin. Soma roadbikes are not very common here on the East Coast. So imagine my surprise when on my way home I encountered another Smoothie! 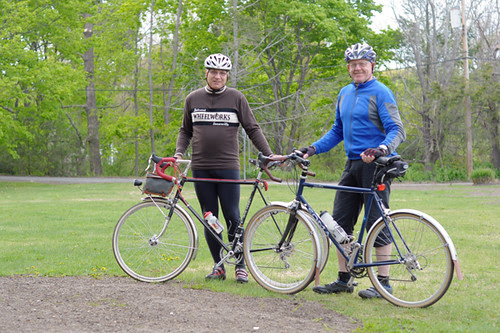 As I stopped to snap some pictures at the end of my ride, these gentlemen recognised me and we had a nice chat about their 650B conversions - one a vintage Andre Bertin and the other a Soma Smoothie ES with a Bontrager fork. I am so happy to be back home! Where else but in Boston does one encounter this sort of thing? 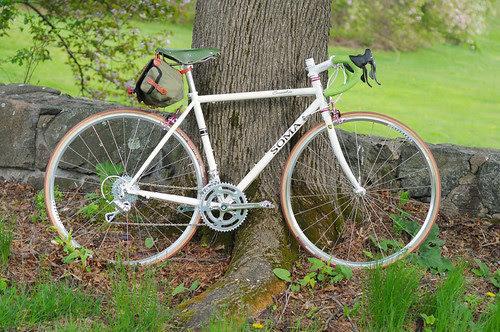 But enough about other people's bikes for now, and here is more about the one I am riding. This Soma Smoothie is on loan for review directly from the manufacturer. It is a 52cm steel frameset that was built up to accommodate my Campagnolo lever preferences, which was very nice of them. Everything shown on the bike is directly from Soma, except for my bag and pedals. 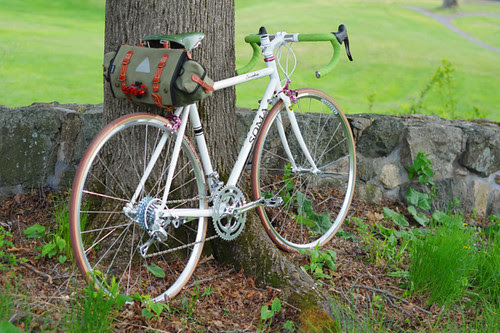 I have not weighed the bike yet, but (without saddlebag) it feels pretty similar to my vintage Moser - so I'd say around 21lb. Described as a road/race frame, the Smoothie nonetheless has eyelets for fenders and clearances for 28mm tires. 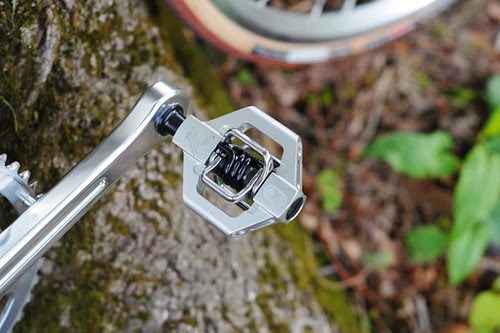 One thing it does't have? Toe overlap! That's right: Here is a stock 52cm road/racing bike with no TCO. They exist. I wear size 37-38 shoes and with 23mm tires there is a boatload of clearance (well maybe it's a small boat, but still). I can definitely fit it with 25mms without a problem, maybe even 28mm. 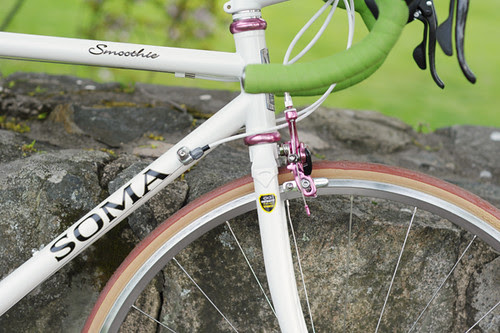 The pearly white colourscheme is adaptable to a wide range of aesthetics, from classic to colourful to stark. The TIG welded frame will not satisfy lug lovers but is solid and smooth-jointed. It is a versatile, unobtrusive frameset. A carbon fork is available in place of the standard steel one for those wishing to go that route. 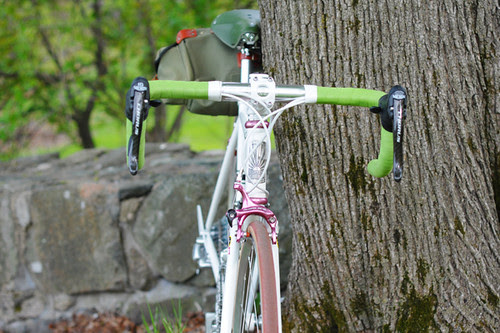 This is not a review, so I won't go over the details of the build at this stage. But as far as first impressions (and mind you this is after just 25 miles), a couple of things stand out: First, it is smooth - as advertised. And I am talking about ride quality: very comfy over bumps and I do not feel any road vibration. And second, it handles tamely and predictably. No twitchiness and very precise cornering at the moderate speeds maintained during my conservative "shake down" ride. 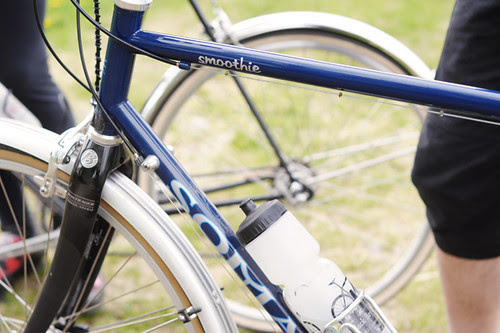 The Smothie ES owner I met on the road is very happy with his bicycle, which he's got outfitted with 32mm tires and fenders. I will refrain from writing more about the bike I have on loan until I ride it extensively, but at under $400 for the frame, I am impressed so far. We need more of these on the East Coast and I hope some local shops will carry floor models in the near future.
Labels: bicycle reviews bike friends roadcycling Soma test rides