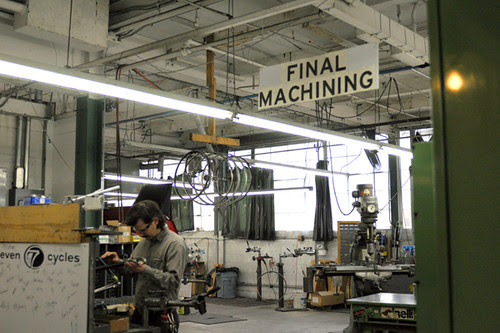 A couple of weeks ago I visited Seven Cycles - a local manufacturer of titanium, steel and carbon fiber bicycles. I was given a tour of the factory and it was, of course, fascinating. I never tire of seeing local framebuilding shops: The machinery, the precision of the work involved, even the heaps of tubing and the scraps of metal lying around excite me. And there certainly was all that at Seven, on a grand scale. 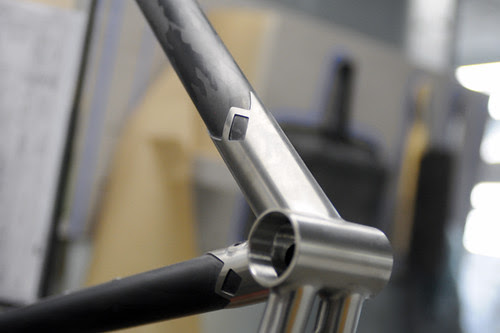 To my surprise - seeing how they are TIG-welders mostly - there was even lugwork. Lots and lots of lugwork in fact, with interesting cutouts. 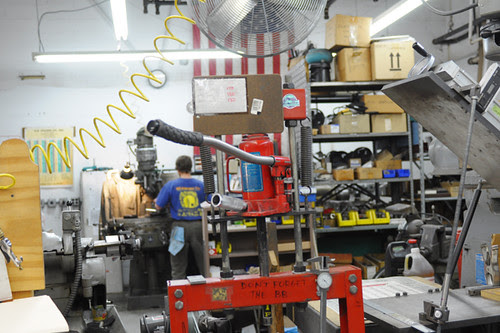 But what made the biggest impression on me during the visit was not the intriguing floor layout, the delicately carved titanium latticework, or the explanation of Seven's approach to the manufacturing process. It was the fact that I recognized so many of the faces I saw there. 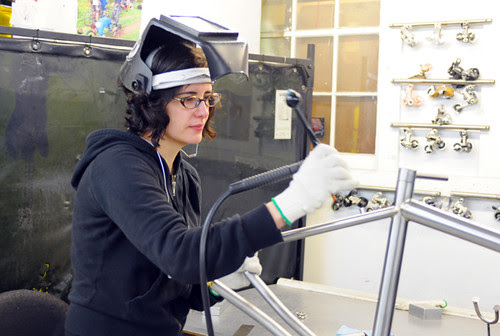 It is hard to explain the state of mind this put me in without coming across as preachy about local manufacturing, which is not my intent. I am not thinking about the political-economic implications of local manufacturing as a concept, but about the very concrete existence of my local manufacturing. I mean, there is a factory 6 miles from my house, and in this factory they make bicycles from scratch, and the people making these bicycles - well I happen to know many of them and they live nearby, and sometimes we even see each other on the street. That is highly unusual is all. In today's society the relationship between objects and the people who make them has become completely abstracted. We do not expect our neighbours to make the stuff we might be using; we expect that stuff to be made by some nameless entity, far away from our little world. 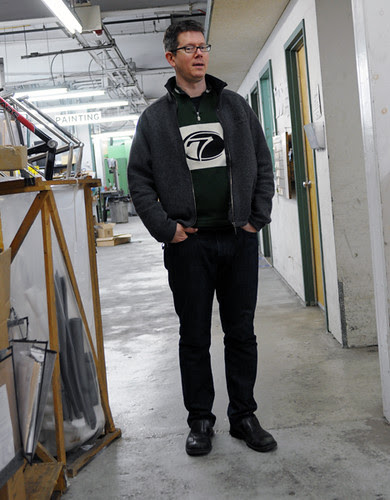 When I told Seven owner Rob Vandermark how much I enjoy watching frames being built, he replied that not everyone feels that way. For some seeing the process takes away the mystery, and it's more exciting if a frame just "appears" - shiny and new with flawless paint. I've heard that before. A framebuilder once told me that he discourages customers from watching him work, because it makes them more aware of the possibility of human error and later those customers are liable to feel more nervous about their frames. Psychologically, that makes sense. But it also means that consumers of goods prefer not to think about the process of making those goods, which has all sorts of far-reaching implications. 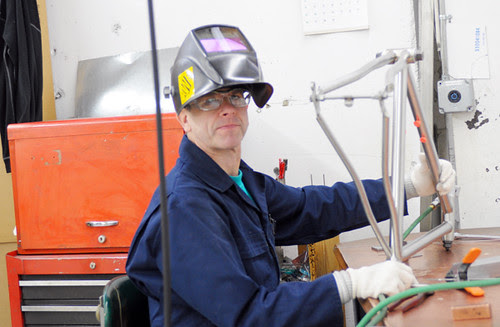 Maybe it's because I've made things by hand myself and used them, as well as given and sold them to others who've used them. But seeing how something is made excites me rather that ruins some illusion of flawlessness. 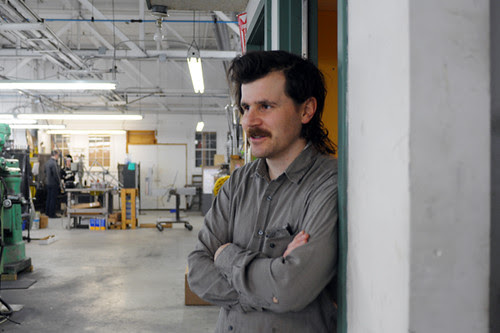 The first person I saw when I entered the production area during my visit was Bryan Hollingsworth of Royal H. Cycles - whom I watched make a lugged mixte frame for me more than 2 years ago now. He works for Seven (making carbon fiber frames!) a couple of days a week, and on Royal H. the rest of the time. 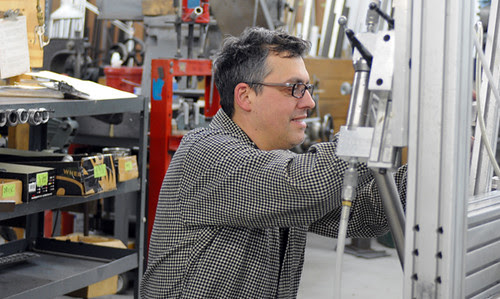 Welder Mike Salvatore has his own project on the side as well, albeit a Sketchy one. 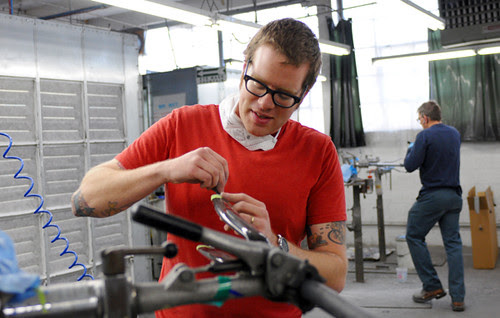 Dan Pugatch lives in Somerville and is well known on the local cycling scene. 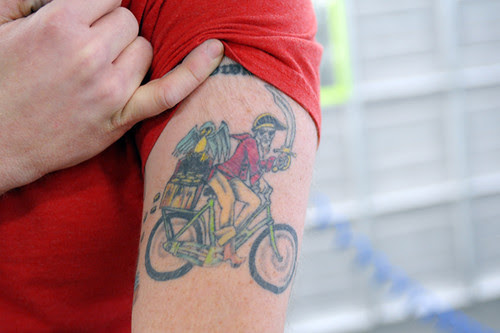 Dan writes a blog and contributes to Boston Retro Wheelmen, but what I didn't know is that he also has this cool tattoo that promotes cycling to work in regular clothing. Notice that the pirate is riding a step-through with a full chaincase. I wonder how the crate is attached to the rear rack, and whether there is a sword peg brazed onto the frame? 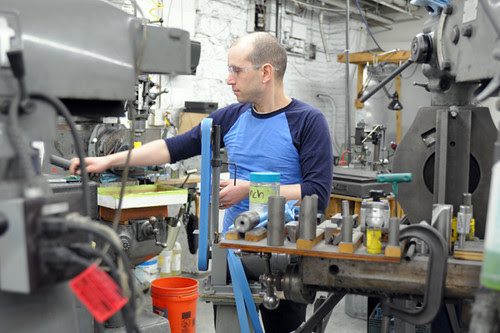 Jonathan Henig lives maybe 5 minutes from me and is a fellow photographer. First thing he did when we started talking was examine my camera lens and nod approvingly. 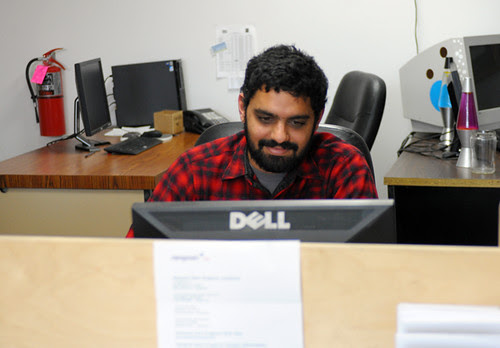 I had not met Neil Doshi before, but I knew his bike - a happy marriage of titanium, green canvas and leather. 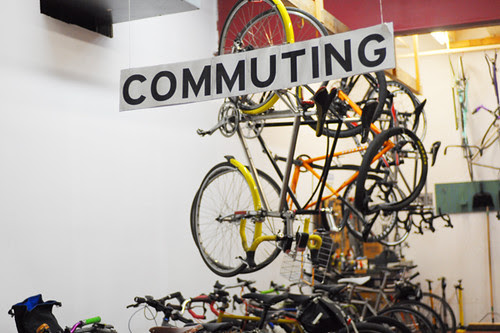 And now I saw it in person, along with dozens of other contraptions in the famous Bike Room. The bikes of Seven employees are staggeringly practical - lots of upright 3-speeds, handmade racks, huge saddlebags. More what I would have expected to see at Rivendell than at Seven, a company known for its racing bikes. 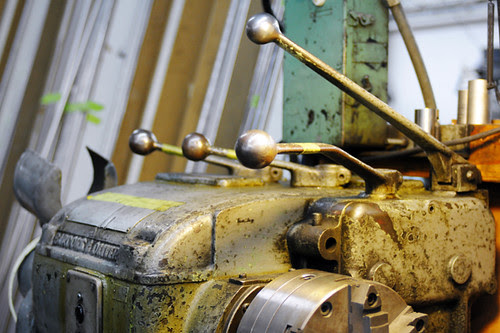 After my tour, I couldn't help but wonder whether I'd gotten the most out of it. The space is truly impressive and there is a positive energy that makes me want to run out and apply for a job there, regardless of what it is they'd assign me to do (I hear there is a titanium shavings sweeper position open?). In retrospect I should have asked more detailed questions about the manufacturing process. I should have taken close-up photos of the machinery with a medium format film camera. Instead I walked around talking to everyone, then watching them quietly, then talking some more. Not necessarily about bikes either. And then we all said "good-bye" and "see you soon" and then I rode my bike home - an idyllic route from Watertown along the Charles River Trail. 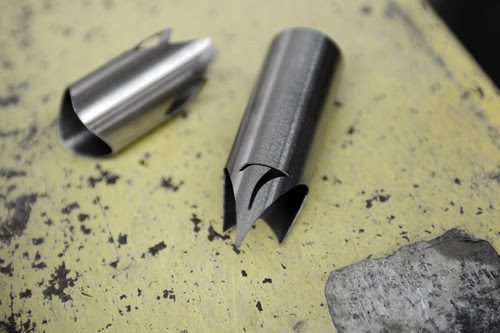 Cycling home after my visit, I remembered the first time I met Rob Vandermark. It was about a year and a half ago, when I had just discovered the Ride Studio Cafe. The first time I came in there was this tall, polite, unassuming guy serving coffee behind the counter. Naturally, I thought he was the barrista. Later someone came in with a flat tire and he went to take care of that, so then I figured he was the all-around shop guy. After a brief chat, it also turned out that he was my neighbour - living nearby in Somerville and commuting to Lexington by bike when possible. Only well into another conversation with him later did I learn, with some embarrassment, that he was the owner of both RSC and Seven Cycles. As a customer, you would never know. And of course the whole point is that it should not matter. 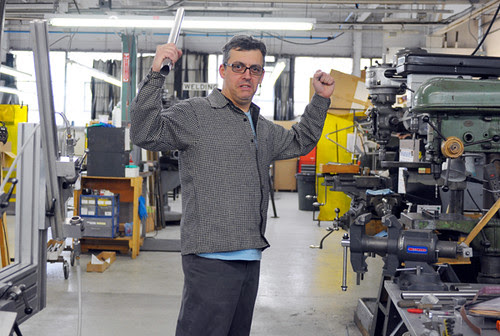