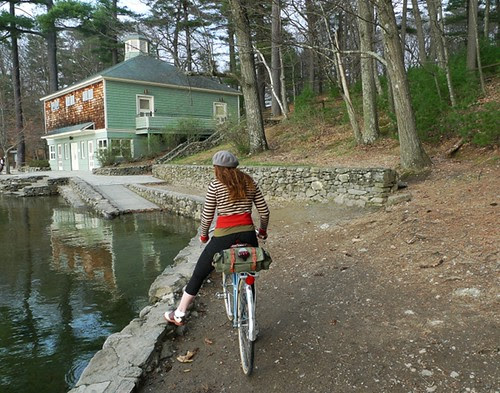 To the delight of some and eye-rolling of others, during the first year or two of this blog I referred to riding a bike recreationally as "sporty cycling." What a funny term. Why not just call it roadcycling? Well, because it's not! Roadcycling evokes associations that I felt were not appropriate to the kind of riding I did at the time - or in fact to the kind of riding most people who just want to ride a bike for exercise are drawn to. Roadcycling is its own world, with what I consider to be pretty rigid parameters. There are assumptions about equipment, positioning on the bike, speed, and even style, that are pretty much unspoken pre-requisites no matter how friendly and open the people are. Whether described as "social rides" or "training rides," it is still a fairly specific type of riding that assumes performance-optimised equipment, advanced handling skills, and the ability to maintain what most would consider a high minimum speed. And there is nothing wrong with any of this. Except that not everyone wants, or needs to ride like that. To ultimately be on a bike with dropbars, keeping up with the local roadies, need not be an end goal. Some might truly enjoy riding an upright bike at their own pace, without feeling the need to "advance to the next level." The very idea of advancing - of cycling in order to get faster, stronger - is part of the roadcycling discourse and& need not influence those outside of it.

In May 2009, just a couple of months after I touched a bike for the first time in 13 years, I rode my first 50 miles. I was living in Vienna at the time and riding around on an upright hybrid rental, up and down a short stretch of the Danube bicycle path outside of town after work. Then one Saturday, I just kept going and before I knew it I did 85km - which I hadn't even realised until I looked at the map of the area I covered later; I just knew it felt like "a lot." How fast did I go? No idea. What was my nutritional plan? None. What did I wear? A cotton tunic, leggings and sneakers. Did I look like a complete dork, puffing away on my inefficient hybrid with suspension fork, saddle too low and handlebars too high, my loose sweat-stained top billowing in the wind? To a roadcyclist, maybe. But to a regular person? I just looked like a person doing a long bike ride. 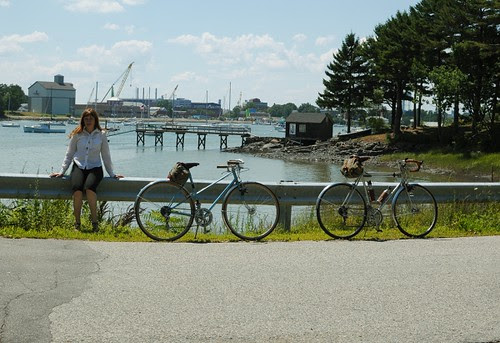 I do not know why, over the years, I have grown attracted to roadcycling and do in fact now want to get faster, stronger, to "advance." I enjoy it and do not regret the transition. But at the same time, I maintain that it is absolutely not necessary to ride a bike in this manner. Last October I was back in Vienna and did a 100 mile ride along the same route I rode in 2009. Again, on an upright bike in regular clothing, with no training in the weeks leading up to it and no nutritional plan. I thought that maybe that kind of ride would be boring for me at this stage, but it wasn't at all. It was just different. A different frame of mind, a different style of riding. I went slowly and didn't worry. It was not about performance or timing. I was just a person, going kind of far on a bike.

Now and again I get emails from readers who are genuinely upset because they can't seem to transition from an upright step-through or mixte to a roadbike with drop bars. The local cycling clubs only cater to the latter. Their spouse rides a roadbike. They feel left out. But the more I think about it, the more I realise it just doesn't make sense to give up the sort of bike you are perfectly happy with because of some misguided notion that you "should" be riding a roadbike if you're serious about cycling. I do wish there were more bicycle clubs that catered to casual cycling, where people on hybrids and upright 3-speeds and mixtes could feel at home and within their comfort zone. I also think there is a difference between casual cycling and casual cyclists. You can be a serious, committed cyclist and ride casually. This distinction is not often acknowledged.

Roadcycling is not the only valid form of recreational or sporty cycling. There are so many ways to ride a bike, and there is no right or wrong way as far as I am concerned. How we ride depends on us alone.
Labels: mixte roadcycling technique