Still a Lot of Lands to See... 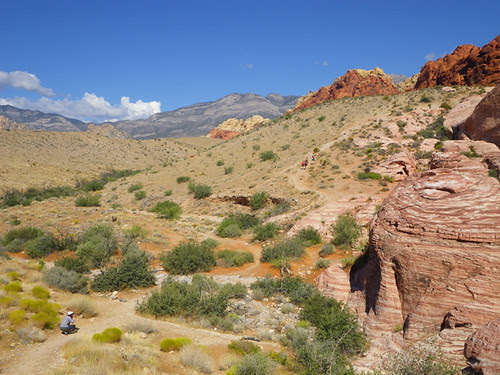 I have been afraid to write about this, because then it would become real... But this morning I've been listening to Joni Mitchell for inspiration, determined to finally do it. So here it is: in the end of March I am going to Death Valley in California for a bit of bicycle riding. Chris Kostman of AdventureCORPS has invited me to a couple of events that he organises: a century ride called the Hell's Gate Hundred, preceded by 5 days of cycling, hiking and yoga that is known as CORPSCamp.

I have never been to Death Valley, or to California before. And these events will be like nothing I've ever done previously. I will probably fail at them terribly, but I want to try anyway. The reason goes back to my trip to Interbike in Las Vegas last September. 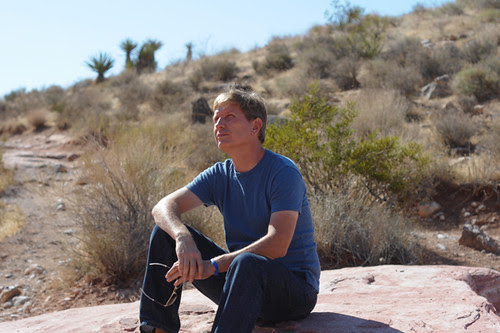 I met many interesting people at Interbike. Some were sponsors with whom I've hitherto only had email contact, and Chris Kostman was among them. Describing Chris is a challenge, because "on paper" I knew of him as an athlete (the youngest to complete the Race Across America at age 20, he finished 9th). But when we met in person it was so removed from that, that I had a difficult time even picturing him on a bike. In fact I'd wanted to photograph and write about him back in September, but all the pictures came out looking like a GAP commercial, it was no good! An endurance cyclist since his teenage years, for decades Chris has been racing and competing in endurance events, and was even part of Team Bridgestone in the early '90s. Somewhere down the line he founded AdventureCORPS and now organises well known "ultra-cycling" events such as the Furnace Creek 508, as well as various century and double-century rides and cycling camps.

Reading about these things, as well as Chris's many articles on training and nutrition, one gets the sense that this is a person who lives and breathes sport and spends most of his waking hours training. I was almost nervous to meet him. Would he make me do push-ups as we chatted? Turns out we had a lot to talk about. Chris is alarmingly intelligent, and one of those people who is interested in everything - soaking up knowledge like a sponge and sharing it freely with others. Since I started roadcycling, he has given me valuable advice and has opened up my mind about the place cycling can have in my life. He also sparked my interest in the desert landscape. Interbike was overwhelmingly hectic, and after taking pictures of bicycles non-stop as I walked around the huge showrooms for hours, I was exhausted. Still, when Chris offered to show me Red Rock Canyon outside Las Vegas on my last day there, I dragged myself out of bed early and, with a migraine and eyes half closed, grabbed my camera bag and made it into his time-traveling car. The only desert I'd seen before had been in the Middle East, and my memories of it were not fond. I expected a version of the same here. As we drove to Red Rock I mostly wanted to get it over with just as a "there, I've seen it" sort of thing. But my experience proved to be different. I am a very visual person, and normally it is the way a place looks that influences me the most. And Red Rock was certainly striking, with its striped mountains and fields of rocks, cacti and unusual grasses. But that is not what I remember the most, and it's not what got to me. My strongest memory of the place has to do with how the air felt and smelled. It was so weird, I am not sure how to describe it. We got out of the car and immediately I walked 5 steps into the desert and just stood there. It wasn't hot. Or maybe it was, but I didn't notice. The air had a dewy quality to it that was not only unexpected, but nothing like the dewy morning air I am used to in Northern climates. There was a scent to it, too. Very faint and I bet the people who live there no longer notice it, but for me it was new. I think the scent was coming from all the weird little plants, and the overall effect was kind of melony - lightly sweet and refreshing. 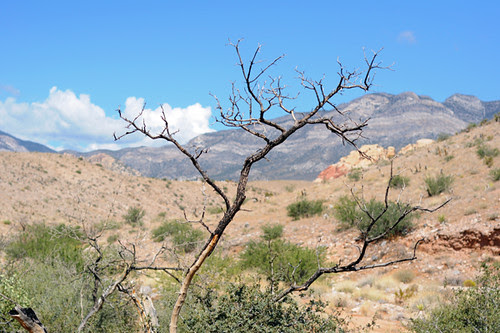 Within 5 minutes my headache went away and I no longer felt tired or sleepy. In fact I felt like going on a very long hike or bike ride. This change in energy levels and sense of well-being was so quick and dramatic that it was as if I'd gotten an injection. Crazy. There wasn't much time before I had to get back to Las Vegas, but I walked around taking pictures for as long as I could, for the first time regretting that I could not stay and explore the area longer. 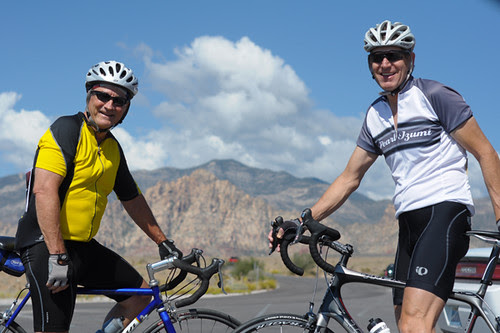 We saw some cyclists in the desert, and I was envious. Riding in that fresh dewy air with the cactus scents and the stripey mountains looming in the distance must be nice. And that is when Chris remarked casually that I should take part in one of the rides he organises - in response to which I, of course, laughed, since it seemed wildly unrealistic. But by the time December rolled around, I'd been cycling like crazy and it changed to seeming only moderately unrealistic. When AdventureCORPS and the Furnace Creek Ranch officially invited me to the March events in Death Valley, I decided to go. 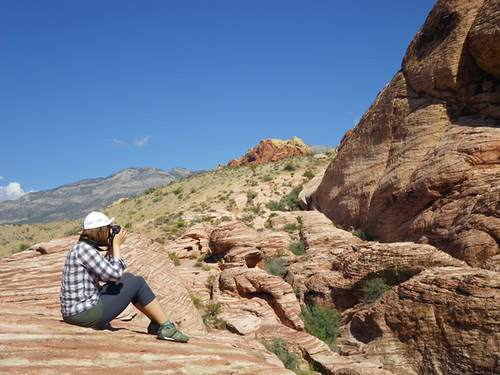 To save myself future embarrassment I've been trying to be non-comittal about classifying myself as a participant vs a photographer/support person. Chris assures me I'll be fine doing the rides, but he must think I am being modest in describing what a poor cyclist I am. Still, I've now registered on BikeReg and everything is settled, so it looks like it's happening. Soma Fabrications will be loaning me a Smoothie roadbike to test ride while I am in California, which I am excited about as well.

Physically I'm not ready for the Hell's Gate Hundred and the 5 days of cycling that is CORPSCamp. But I keep from hyperventilating by telling myself there isn't really any pressure on me to finish all the rides, and that I can do as little or as much as I feel comfortable with. It will be both scary and interesting to find out how much that is. And of course, I will get to see California. I am nervous and looking forward to it all in equal measure.
Labels: bike friends Interbike travel