Bike on the T: a Mini Adventure 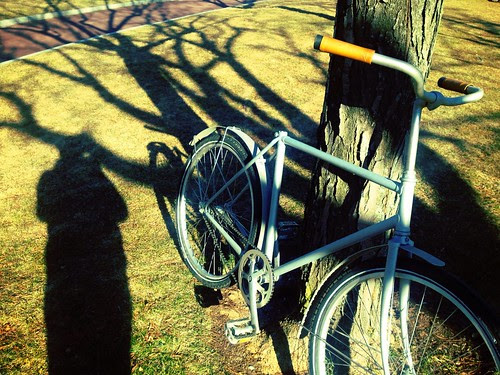 A couple of days ago I happened to visit a bike shop in downtown Boston and the owner had an interesting bicycle in the back - very unusual to see in the US. I commented on it, and he uttered this fateful reply: "Oh this thing? Take it, please! Get it out of here!" And he made me an offer I could not refuse - dared not refuse. Before I knew it, I was standing by the Boston Harbor with the bike, grinning like a madwoman at my unexpected acquisition.

But once the euphoria subsided, the reality of it hit. Missing a saddle, seatpost and front brake, the bike was not ridable and I lived 4 miles away. There was no way I was rolling it all the way home. It was time to try the dreaded "bike on the T." I had heard horror stories about it from others, but now I would find out for myself.

In Boston, bikes are allowed on the subway on weekdays before 7am, between 10am and 4pm, and after 7pm. It was now 3pm, so I was just in the nick of time before the evening rush hour ban. I walked the bike to South Station and looked for an entrance that indicated the presence of an elevator. I could not find one, and rather than try every single entrance decided to carry the bike down the stairs. It was on the heavy side, but easy to hold by the top tube - overall, not too bad. 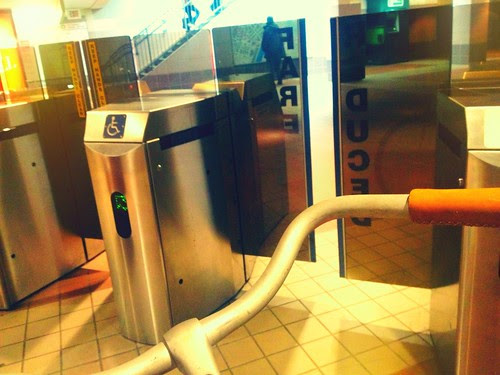 Once underground, I headed for the extra-wide handicapped entrance, slid my "Charlie card" along the electronic reader, and like magic I was in. The bike got a lot of looks from passers-by, and a couple of people asked me sympathetically whether my saddle had been stolen. The station was not too crowded, and rolling the bike along did not present any difficulties. 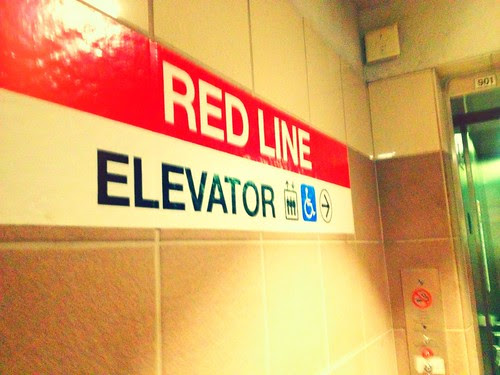 Knowing that a series of staircases awaited in order to reach the platform, this time I made it a point to look for an elevator. I found one pretty quickly. 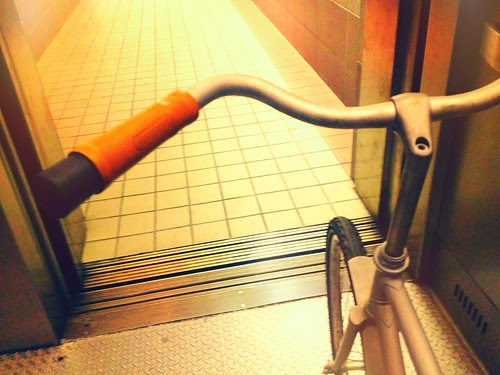 It was a roomy elevator, with plenty of space for bikes, wheelchairs and baby strollers. I pressed the button that indicated the platform I needed to get to, then disembarked when the elevator stopped at that floor. 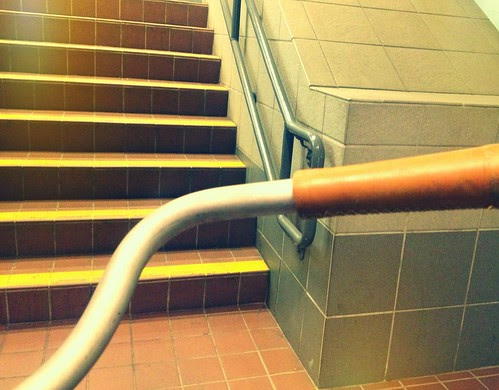 Immediately there was a sign for the platform, but then... more stairs despite having taken the elevator! It is possible that I did something wrong, but the elevator did indicate that this was the correct place to disembark. Confusing, though I was fine carrying the bike down some more stairs. 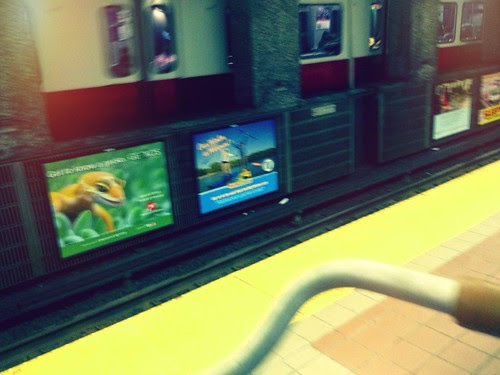 Finally I was at the platform, waiting with a decent-sized crowd of others for the train to arrive. I began to strategise: I would try to enter so as to get in the corner of the car, where I could stay close to the door and have some space. As the train pulled up, I could see that some of the cars were emptier than others, and quickly walked toward one of those. 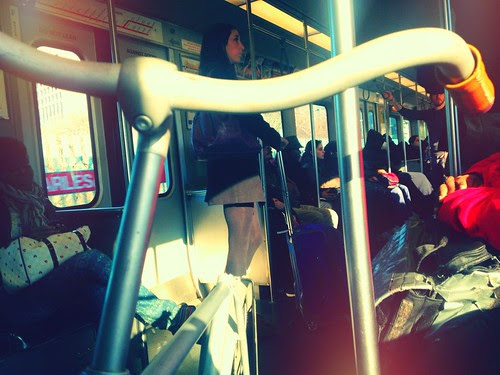 As planned, I was able to get into the corner of the car and stay close to the door. There was even an empty seat, and I positioned the bike in front of me at an angle, so that the people in the seats next to me could come and go without the bike blocking their way. The ride was bumpy, and I wedged the front wheel between my knees in addition to holding the bike, to keep it stable. The other passengers steered clear of the bike and did not bump it or brush up against it, which was nice (when I mentioned this to the Co-Habitant later, he suggested they were probably afraid to get their clothes dirty - the bike looked filthy!). Once the train reached my station, I got up and rolled the bike backwards out of the train - not difficult as we were right by the door. 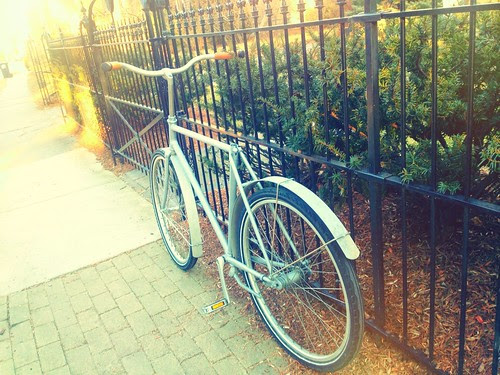 At the station, I decided not to even bother looking for an elevator and took the bike on a series of escalators. Then I rolled it home, which was a 12 minute walk.

Overall, I would describe my experience of taking a bike on the T in Boston as unproblematic. It is of course crucial to pay attention to the rules regarding which trains allow bikes and when, and to plan accordingly. If your bike is so heavy that you cannot carry it up and down stairs, I would also suggest looking at station maps beforehand to familiarise yourself with the locations of elevators; they are not always obvious. As the train arrives, keeping an eye on the cars and aiming for one of the emptier ones is a good idea, and looking for a spot in the corner of the car will ensure proximity to the doors. If you find that the car is getting crowded as your station nears, you could warn people that you are getting off at the next stop and will need to wheel your bike out. Other than that, I cannot really think of any additional advice.

In close to three years of cycling in Boston, this was my first time taking a bike on the subway and I am glad it went well. Now, to find a seatpost for this bike...
Labels: Boston transport transportation options