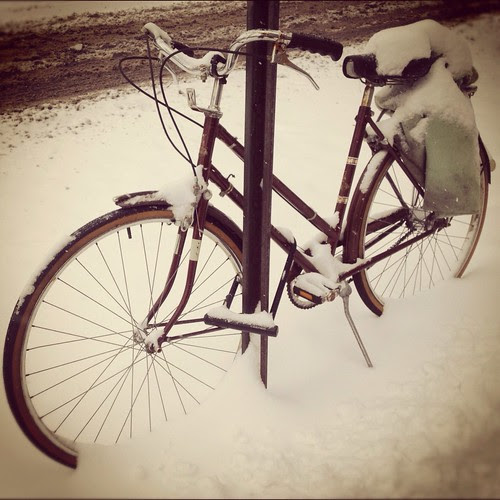 This morning I received an email from a reader - Elise - who left her bike locked up outside a restaurant overnight, to find it covered in snow the next morning. Upon trying to retrieve the bicycle, she discovered that "all the parts were snow-encrusted" and wasn't sure it was safe to ride, so she left it where it was and took the bus to work. Of course it then snowed again, and the bike's condition only got worse. Elise is wondering how to retrieve her bike after it's been in the snow in freezing temperatures for what has now been 2 days. 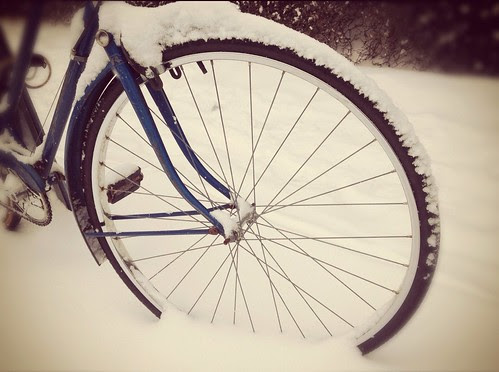 While I don't know what condition Elise's bike is in, I can share what has happened to me in the past as a result of leaving a bike out in the snow for too long, and hope that something here might be applicable:

"frozen" wheels: Once I found that my bike did not want to roll after being left locked up outside in the snow. The front wheel would not budge, and at first I thought something was seriously wrong. On closer inspection, it turned out there was some frozen snow stuck between the fender and the tire. I cleared it out and "unfroze" the wheel.

clogged brake calipers: Riding a bike with caliper brakes in winter, I quickly learned that getting clogged up with snow eliminates their stoping power. And since snow does seem to love settling down on brake calipers and then solidifying, it is essential to clear it out of there. Wheel rims can also get iced over and may need to be wiped down.

icy pedals: A few times my pedals have gotten icy, to the point of making it difficult to ride the bike without my feet slipping off. When this happens I scrape them with the textured sole of my boot to break up the sleek surface, or try to rub some dirt on them.

"sluggish" drivetrain: In freezing temperatures, it can sometimes feel that my drivetrain is slower, or not as smooth as usual. My understanding is that this is due to whatever lubricants are used on the drivetrain getting gooey from the prolonged cold. It is still okay to ride your bike like that as far as I know, but it might feel a little weird.

Each of these things has at some point made me panic and feel that a bike was "unridable" after being left out in the snow, but they all proved to be resolvable. 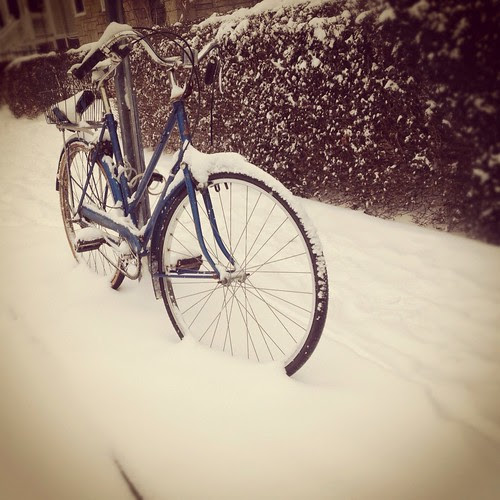 Granted, other issues may not be as easy to deal with. I've heard stories of frozen U-locks being impossible to open, and of leather saddles snapping in half if ridden when frozen. And perhaps the most common problem of all is frozen derailleurs, which I have no experience with since I do not ride derailleur-geared bikes in the winter.

Whether it's about components on the bike getting iced over, or the owner feeling that conditions are not safe enough to ride home, bikes get left in the snow - which all too often turns into full on abandonment. Any tips for avoiding this would be much-appreciated. How do you deal with a snow-encrusted bike?
Labels: winter cycling