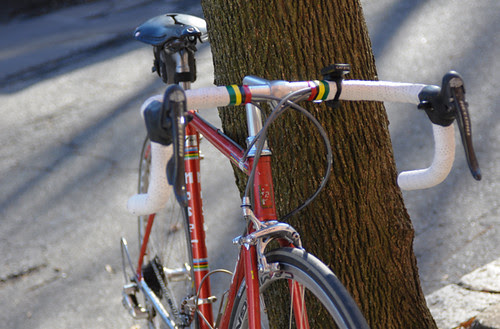 Having now ridden Moser 2.0 for about 400 miles, I think it is time for a report. For those who do not feel like reading about the bike's entire history, this is a lugged steel racing frame circa 1978 fitted with nice Campagnolo components circa 1999. The Columbus "tretubi" frame is 52x53cm, with an 11cm stem, handlebars 1cm below saddle level (I would like to set them lower, but the stem won't go down any further), 700Cx23mm tires, and 175mm cranks. Gearing is 52/39t in the front and 12-26t (9-speed) in the rear. The complete bike weighs 22lb without the waterbottle. I have been riding it since the end of November, and the individual rides have ranged from 30 to 60 miles. Mostly these have been group and club types of rides, and mostly with riders stronger and faster than me.

I know that people are interested in whether building up an older steel racing frame is feasible for "serious" roadcycling, and based on my experience with the Moser I do not see why not. As far as weight, 22lb is not bad at all for a complete bike - I have picked up new bikes with aluminum frames and carbon forks and they felt heavier. If I want to shave even more weight off, it could be done with some strategic component upgrades, but honestly I did not feel that the weight was an issue for someone at my level of ability. 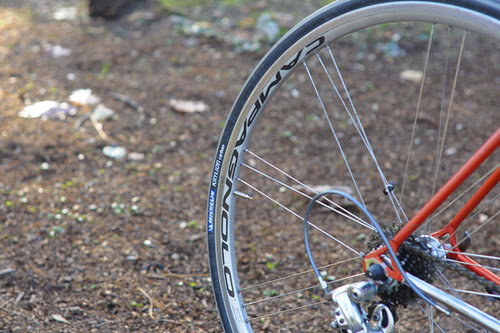 As far as speed, I was able to ride with strong cyclists the likes of which I did not think I'd be good enough to ride with, at what they call a social pace (15-18mph on average, depending on the ride), while also feeling some reserve. At no point did I feel "if only I had a faster bike!" while riding the Moser.

When climbing, the bike itself feels "eager" to ascend, and the only limitations I felt were my own and also the high gearing. I would need to get lower gearing in the long run, no question. But the bike itself was fine climbing. When I ran out of gears, I would simply "heave" us uphill. Sadly my legs no longer fit into my jeans as a result of this practice, but we can't have it all.

The ride quality on bad roads has no harshness to it despite the 23mm tires, I am very happy with this aspect. The frame's tubing feels wonderful and just right; perfect amount of flex and all that.

At slow speeds (and I mean very slow - like less than 10mph, when stalling in traffic) the Moser is a little twitchy (compared to my fond memories of the Seven at least, which remained stable even at a crawl), but I do not mind and can still easily control the bike.

The one and only inherent aspect of the handling that is a problem - and the more I ride, the more I realise it is a problem - is descending. I do not entirely understand what is going on and why. But basically at high speeds, the bike is extremely resistant to turning and this was rather scary to discover. At first I thought that I just needed to get used to being on a racy bike again, and that I was holding myself back because I was nervous. But nope, something odd is definitely happening with the high speed turns - not just 90° turns, but even following the curvature of a winding road on a descent. I cannot make the same turns that I know I had no trouble making on the Seven over the summer. So while the bike is capable of great speed, this handling issue ultimately makes me slower, since I hold myself back on descents when I do not feel in full control of the bike. I've been trying to understand what is causing this, and what I can do to counteract it, but my instincts are failing me. Naturally I try to take wider turns, but it isn't always possible, and I am just never at a point where I can let myself go on descents. 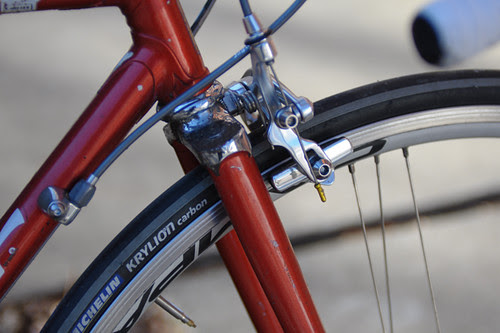 Exacerbating the descent problem is that I am not entirely happy with the braking power. I did not have a brakeset that would fit this bike, so I bought some Campagnolo Veloce calipers. While I realise that Veloce is not top of the line, I still expected it to be fully functional. I guess with my weak hands, not so much. We have adjusted the brakes this way and that, but coming to a complete stop (like at a stoplight or traffic light at the bottom of a hill) after a high speed descent is problematic. 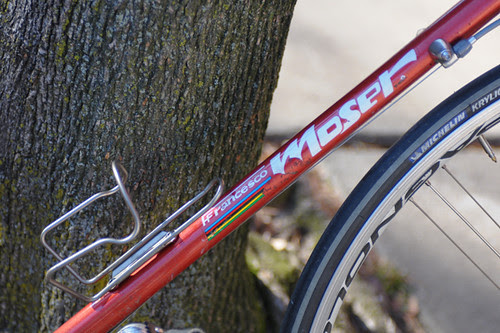 There are other issues that have surfaced in the course of riding the bike. For instance, there are only braze-ons for one bottle cage, and during longer rides I needed more water. I could get a second bolt-on bottle cage, but it seems a shame to do that to this frame. As mentioned before, there is also quite a bit of rust on the frame that is not visible in pictures (like along the underside of the top tube). It might make sense to get the frame stripped, the rust cleaned up, a second set bottle cage bosses brazed on, and then the frame repainted. 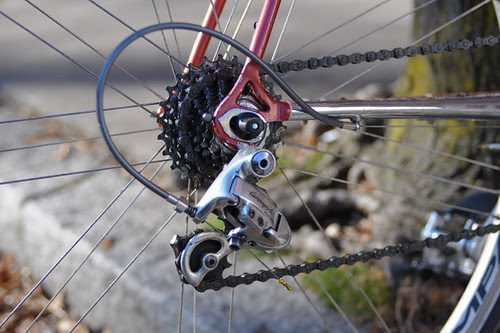 In addition, the rear wheel does not want to stay put in the chromed horizontal dropouts unless the skewer is tightened with a death grip. When initially the skewer was closed with reasonable force, it became misaligned and jammed against the chainstays the first time I rode the bike. It is now tightened as tighteningly as can be and this has not happened since. But it means that I cannot remove the wheels on my own despite them being quick-release; I am not strong enough to budge the skewers. 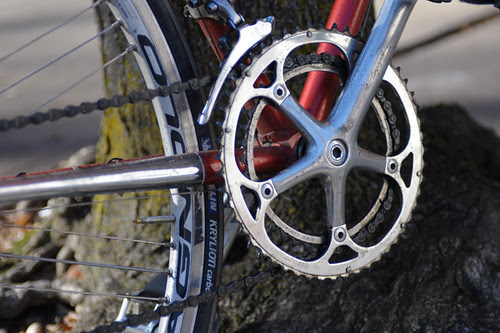 On top of the too-high gearing, the pedal strike from the 175mm cranks, and the too-tall stem, all in all that adds up to a lot of stuff I would have to replace on the bike (the crankset, the cassette, the brakes, and the stem at least) even without the re-paint and second bottle cage question. I would be willing to make this investment for sure if I was 100% comfortable with the bicycle's handling, but this problem with descents now has me concerned.

And that is where I am right now with my assessment of the bike. More than anything, this experiment has convinced me that I do very much need a fast road bike. Despite the issues mentioned here, I just wanted to ride-ride-ride it all the time, even in the winter.  No time to ride? I found the time. Too cold? I got over it. Too early in the morning? Nonsense, the Moser beckons. Tamer, more sensible bikes are wonderful, but for whatever reason they do not have the same effect on me as this bicycle does and as the Seven did over the summer. I want a bicycle that is fast enough for club and paceline rides, comfortable over bad roads, and handles well for a ballance-challenged person like me. Is the Moser it? I love it and I hoped so, but I honestly don't know at this stage. Holding back on descents is a problem; I need to feel in full control of the bike if I am going to improve, not to mention for reasons of safety.
Labels: Italian bicycles Moser roadcycling technique