How I Tried to Go Ice Skating 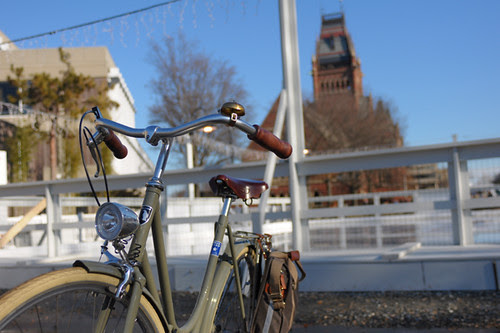 As part of my commute I often take a shortcut through the back of Harvard Yard, and some time around early December a mysterious construction site appeared there. At first I was annoyed to have to go around it. But as the construction took shape, it began to look suspiciously like... Could it be? Oh my goodness yes, an ice skating rink! One afternoon last week the construction fence was suddenly gone and the rink open. Just like that! 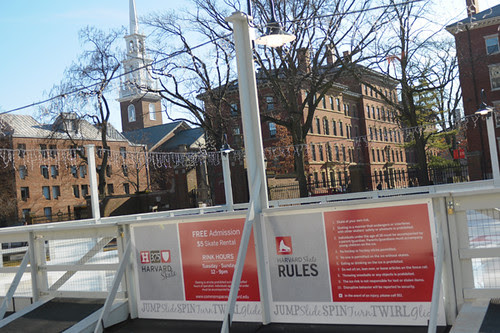 I could hardly pedal fast enough to get close and read the bright crimson sign. And guess what? It is free to skate there, and $5 to rent skates. Technically I still own a pair of skates circa 1995, though sadly I have not been able to find them since we moved to Boston. I can picture these skates vividly in my mind: They were white with jet-black heels and shiny blades, utterly beautiful, and they cost $29.99 at Olympia Sports back when I was in high school. "I will buy them for you, if you really think you can do it this time," my mother had said. And I nodded vigorously. 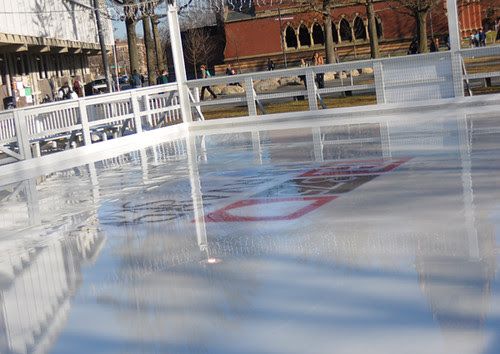 Perhaps now is a good time to explain that the intensity of my love for skating is matched only by my utter lack of ability. Born to a set of parents who skated as easily as they walked, I stunned them with my clumsiness and lack of coordination.

I remember my first time on ice: It was a crisp winter evening not long before my 4th birthday, and a huge skating rink was set up in the park under garlands of lights. My mother - a slender, elegant beauty in a tailored shearling overcoat - glided across the ice effortlessly with a serene smile on her face... as she dragged her little piggy of a daughter along, who flailed and stumbled and continued to be dragged to the sounds of Tchaikovsky blasting from the park's loudspeaker system. "Don't worry, you'll get it!" my mother would say as she glanced down at me occasionally. But mostly she lost herself in the music and glided, dragging me across the ice regardless of whether I was upright or not. 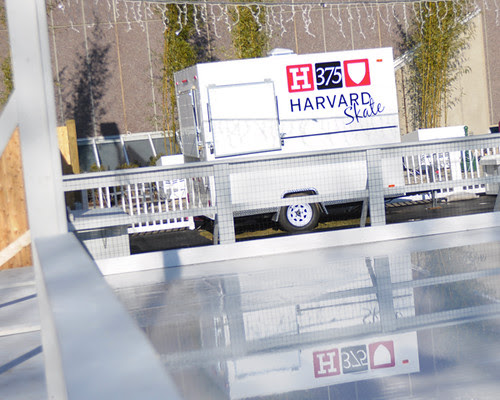 Attempts to get me to skate continued through that and a couple of subsequent winters, but my skills showed little sign of improvement. The "don't worry, you'll get it!" gave way to "but you're not even trying!" until finally my mother gave up. But my yearning for the ice remained, and every winter I sighed as I watched the figure skaters on television. As a teenager I asked for a pair of skates for my birthday and began to visit a local rink on my own - skating in a slow and duck-like manner close to the guard rail. I was remarkably, impressively terrible, but somehow I still enjoyed it. I took these skates with me to college, grad school, and beyond, visiting local rinks for more of the same. And now I can continue here!

Yesterday I knew that I would finally have an hour gap in my day. Prepared to rent skates and I cycled to Harvard Yard full of anticipation. 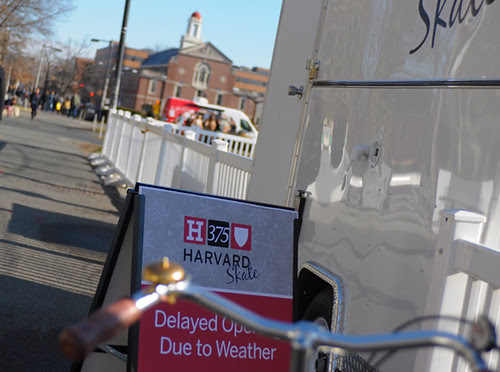 But of course I should have known that it would not be so easy! Just days after the snow storm, the temperature had shot up to nearly 50°F by mid-day and when I arrived the rink was closed "due to weather." So, I have yet to go skating. But at least I tried. And I'll try again as soon as the temperature drops and my schedule allows.

Cycling past the rink last week, I did notice the skates they were using and was a little disappointed that they were a sort of brownish-beige. I want some white ones like the pair I had before, and am thinking that maybe I should get a new pair of my own. Third time a charm?