Bikes, Balance, and Riding No Hands 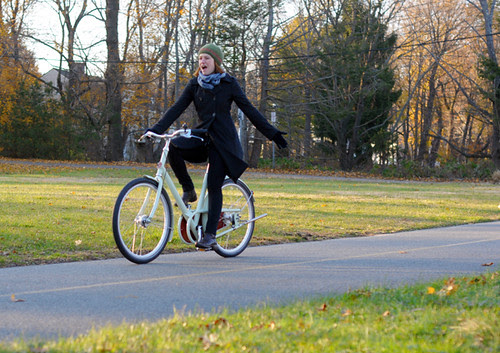 So, yesterday something monumentally cool happened: I rode no hands for the first time. (Before anyone points out that the picture shows one hand on the bars - this is not captured in the picture!) I was alone with no one to witness my no-hands magnificence but the drivers passing me on the quiet side street. I had both hands off, and not just hovering above the bars, but properly off - dangling at my sides as I sat back on the saddle. I rode that way for an entire block, then put my hands back on the bars when it was time to turn. Then I took them off again and rode that way for another couple of blocks. I would have kept practicing, but it was freezing.

I was riding the Paper Bicycle, coming home from skating, and somehow the bike seemed to whisper to me "You can take your hands off the bars now, do it..." - so I did. I was absolutely amazed that I could do it, and that it felt relatively safe and intuitive. The front wheel just kept going unwaveringly straight as I pedaled. But having tried the same maneuver on a couple of other bikes (both upright and road), it didn't work and the front end seemed way too unstable with my hands off the handlebars. So this appears to be bike-specific for me. I am wondering what it is that makes some bikes easier to ride no hands than others.  If I practice long enough on the Paper Bicycle, will I eventually feel comfortable riding a "normal bike" no hands as well, or is the skill unlikely to transfer? I will try not to get too excited, but this is making me feel like maybe I am not an entirely hopeless case!
Labels: Paper Bicycle technique