14 Months Without a Car 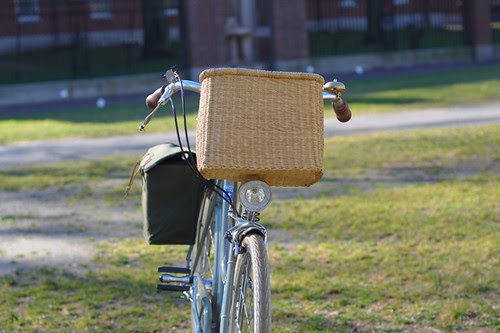 We have been without a car since last December. The "anniversary" of this date was so unremarkable, that it came and went unnoticed. But I've had some requests to post a 1-year report about what it has been like, which made me realise it's already been longer than that. I want to make it clear that being without a car is not a political statement for us and is not wrapped up in our sense of identity. For that reason I do not use words such as "car-free" or "car-light," or any of the related terminology. We simply do not have a car, for the time being. 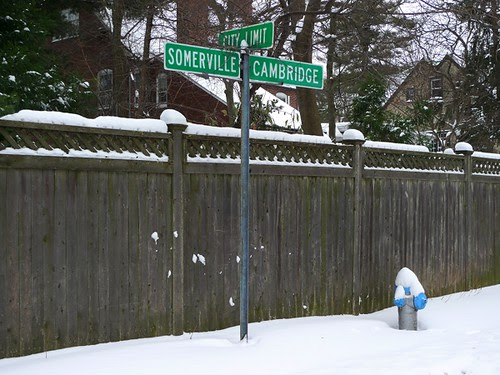 Living on the border of Somerville and Cambridge, MA, we are lucky to be in a location that happens to be convenient for getting around the Boston Metro area by bike. Before moving here 4 years ago, we lived in rural Northern New England - where we did a great deal of driving and each had a substantial vehicle with off-road and hauling capacity. As soon as we moved to Boston, we sold the larger of the two, because it was clear that keeping both was impractical. The Co-Habitant's car was sold, and mine was to become the shared car. However, what happened instead is that I simply stopped driving at that point entirely, preferring to get around on foot and via public transportation. When later I started riding a bike, that became my main mode of transport. I have not been behind the wheel of a motor vehicle since late 2007, and I even let my driver's license lapse for some time. But I still co-owned our shared car, and rode in it as passenger. 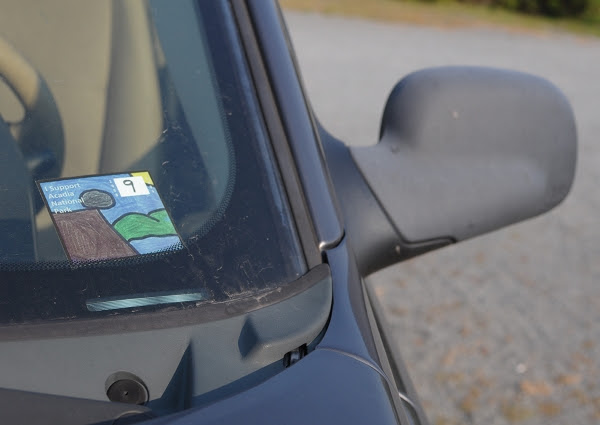 We used the shared car mainly to travel out of town and for trips that involved transporting or purchasing bulky items. The majority of everyday transportation we did by bike, simply because both of us found it more convenient. When the car broke down in late November 2010, we realised that we did not really feel like getting it fixed and preferred to make do without it instead. So that is what we did. 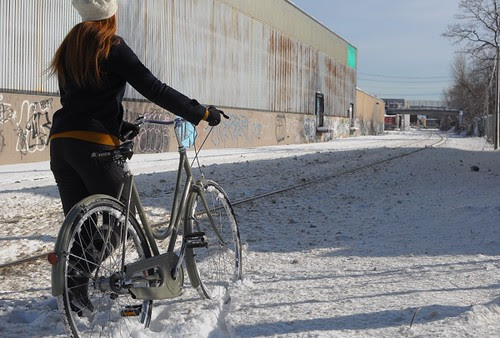 The winter of 2010-2011 was a brutal one, and interestingly getting through it was what cemented our decision. It snowed so much and so frequently, that we often relied on resources close to home - which made us realise that it is possible. If there was too much snow on the roads to cycle, there was a grocery store and pharmacy within walking distance. They may not be our preferred grocery store and pharmacy, but nonetheless they are there for us to simply walk to in case we needed milk at 10pm in a snowstorm. Further afield there are coffee shops, restaurants, a post office, and other destinations that could be reached on foot. The Co-Habitant could even walk to work if really necessary, though he had no problem cycling through snow. I could also walk or take public transportation. If anything, we felt that we had it easier that winter than drivers - who constantly complained about having to dig out and defrost their cars, and about the horrible driving conditions. A bike and a pair of winter boots require much less maintenance. 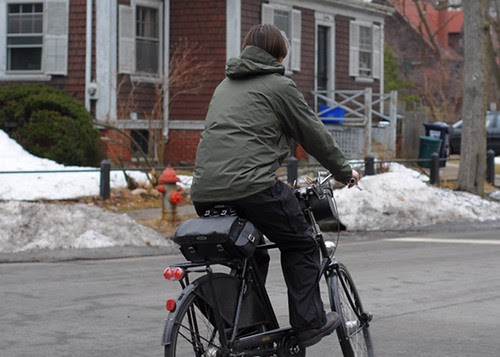 Once that winter was over, everything else was a piece of cake. Owning a car in Boston now seemed like a burden and inconvenience. How did we ever manage with all those fees and maintenance responsibilities? Not owning a car was so much easier, not to mention that we now magically had more money. And that's really all there was to it, as far as everyday stuff was concerned. 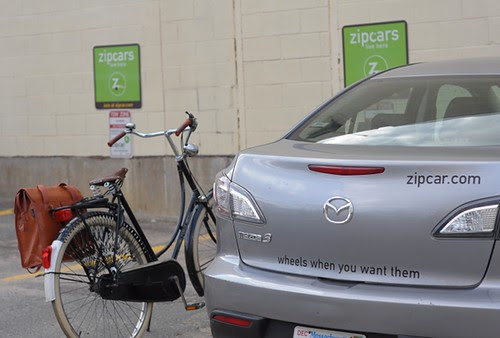 That is not to say that we never used a car. We still occasionally needed to travel to remote out of town locations and to transport bulky items. And, ironically, I occasionally had to transport bikes in various states of assembly for Lovely Bicycle related projects. But the key word here is "occasionally." Once we got the hang of zipcar and car rental, using these services in addition to the occasional taxi proved to be sufficient for us to not feel that we needed to actually own a car. The main limitation of zipcar, is that you cannot always get one on the spot, and we tend to do things spontaneously rather than plan everything out carefully. But over time we got better at planning and also became more savvy/psychic about zipcar rental. After a couple of initial glitches, it has mostly been okay. I even moved into my art studio with the help of a zipcar pickup truck, which went very well with fairly minimal planning. 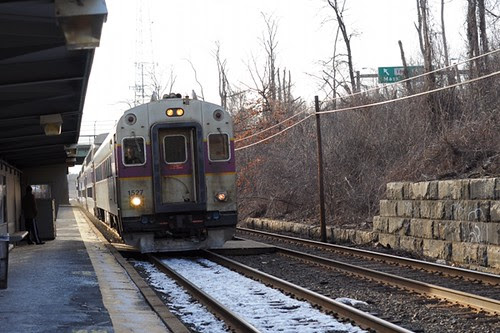 Our only frustration so far has been with the public transportation system. Without exaggeration, the T (subway) has gotten stuck between stations most of the times I've taken it over the past year, making me late for appointments. The buses are habitually late by as much as 20 minutes, to the point that the bus timetable is not meaningful. The buses are also very full and taking fragile items on board is not practical. The commuter rail runs infrequently and not at the times we seem to need it, so that going somewhere via commuter rail can mean having to spend an entire day at the destination instead of the 1.5 hours we need to spend there. Also, many of the commuter rail stops are not handicap-accessible - which also means not bike-friendly, since they have these super long and narrow staircases leading down to the platform from overpasses. Whenever I criticise the MBTA, inevitably someone gets angry, as if public transportation is some holy thing no matter how good or bad it is and I should be thankful for it. But with all due respect, having used public transportation successfully in cities where it works, the MBTA is a disgrace in comparison. I cannot pretend to be thankful for the frustration and wasted time it causes me nearly every time I attempt to use it, and I am certain that it is the reason why more people in the greater Boston area do not feel comfortable without a car. 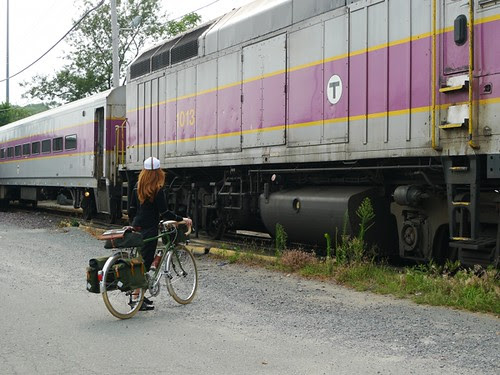 MBTA frustrations aside, we did manage to go on a 2-week vacation via bike plus commuter rail over the summer, and it was a lot more fun than renting a car would have been. No traffic jams, no gas station stops, no looking for parking - just the freedom of bikes. We brought all the stuff we would normally have taken with us too, including two weeks worth of clothing, books, laptops, and basic camera equipment. It's amazing how much you can stuff into heavy-duty bicycle luggage if you try. 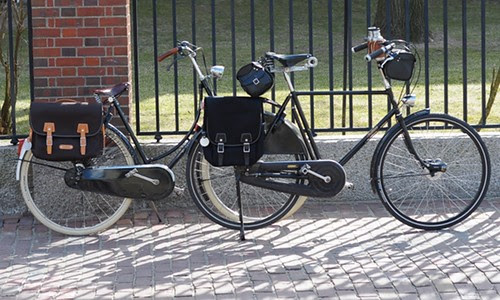 When we first discussed the idea of giving up the car, it was important for both of us not to feel as if being without it would be a struggle, or would limit our freedom. And over a year later, I can say that at no point did we feel that way. At this stage of our lives not having a car gives us more freedom, not less. We do not miss the responsibilities and the spendings that come with owning, parking, fueling and maintaining a vehicle in the Boston Metro area. We also simply never talk about it anymore. We neither lament our carless state, nor do we congratulate ourselves for it; it's just become one less issue to worry about. 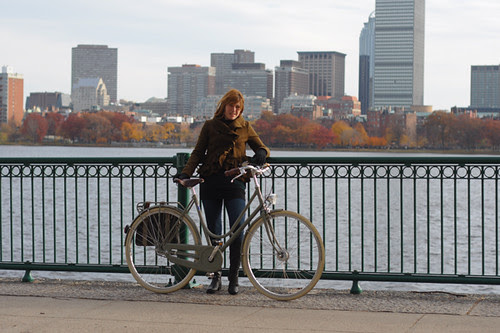 By no means is this narrative intended to be an "if I can do it, you can!" sort of thing. Our circumstances happen to be conducive to getting along without a car, but others' circumstances might not be. There is also no question in my mind that at some point in the future we will have a car again, and I will even drive it - since my ideal place to live is in the countryside in the middle of nowhere. In the end,  it's not about fixating on the car as an object - be it an object of desire or an object of evil - but about deciding what works best for improving your quality of life. Car ownership for its own sake has become such a given, that it may simply not occur to some people that there are circumstances under which they might be better off (i.e. waste less time, be in a better mood, have more disposable income, feel better) without a private vehicle. When I lived in Vienna, I once asked an elderly socialite - the wife of a wealthy politician - whether she and her husband owned a car. She cringed and fanned herself. "Goodness no dear, sitting in traffic is so undignified! I take the trolley and I love to walk. For me, these are life's luxuries." The concept of luxury is, after all, relative.
Labels: cars transport transportation options