On the Symbolism of Cargo Bikes 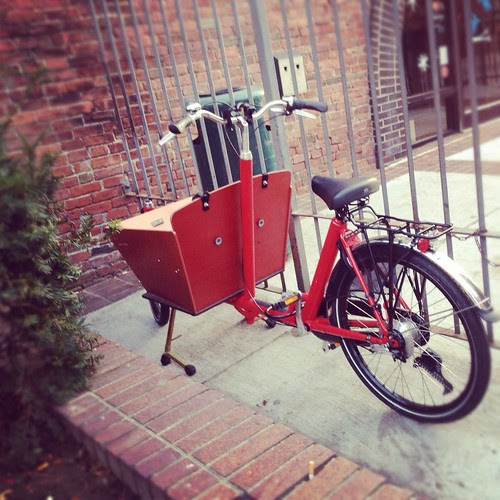 Lately I have been spotting more and more cargo bikes and trikes "in the wild" in the Boston Metro area. Bakfiets, Christiania, Nihola, Xtracycle, Yuba Mundo, Gazelle, all sorts of neat models. Interestingly, almost none of them could have been purchased locally, because no local bike shops carry them. This seems to be based on the bizarre notion held by local bike stores and importers/distributors, that Boston would not make a good market for cargo bikes. I have personally heard this rhetoric many times from various members of the bicycle industry: Cargo bikes in Boston? Oh no, there is no market. Terrible place for cycling. Awful drivers, dense car traffic, narrow streets with no room for bike lanes, rude people. It's a good place for fixies and such, but cargo bikes? No way. 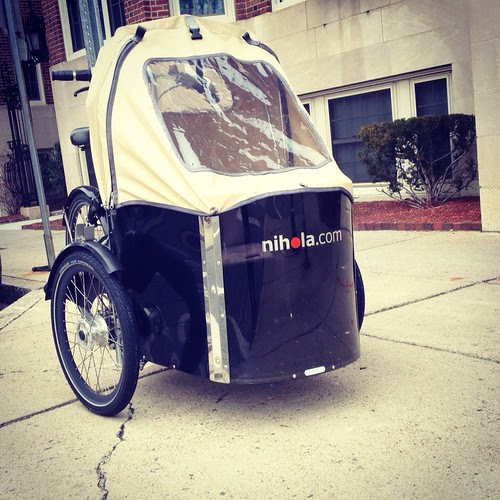 But clearly there is a lag between how Boston is perceived by the bicycle industry and what is actually happening here - especially in the lively suburbs (more like boroughs) of Cambridge and Somerville. Beacon Street - a main road that acts as a border between the two - features parade-like processions of cyclists during morning and evening rush hour of almost Copenhagenesque proportions. Women in skirts, men in smart blazers, child seats strapped to rear racks, baskets on the handlebars, enormous panniers, and even - that's right - cargo bikes.

No market for them, eh? I must have seen half a dozen over the past week alone. And since local shops won't sell them, the cargo-bike-starved population of Boston is forced to travel to Portland ME or NYC to shop for them, or else order online, or else attempt to get them direct from the distributor with lots of behind the scenes begging. Odd really. 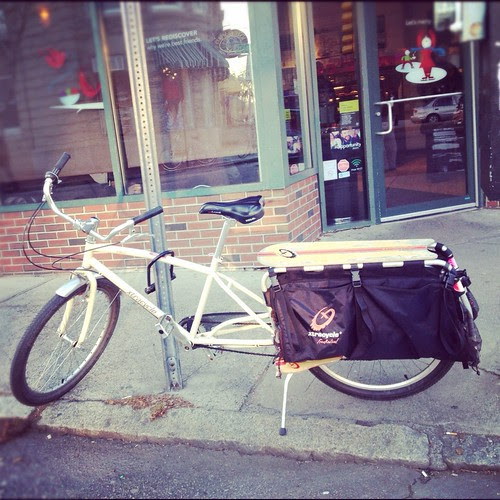 At this point you might be wondering why I care. In fact, why do I have reviews of cargo bikes here at all (see my test ride reports of the Bakfiets, Larry vs Harry Bullitt, Christiania and the Maderna Cycle Truck)? I don't have children and I don't really have enough stuff to transport on a regular basis to need a dedicated cargo bike. So why the interest?
I think cargo bikes are important in that they indicate how far a city has come in embracing and normalising transportational cycling. They equate cycling with safety and comfort, as opposed to danger and athletic skill. The mere sight of cargo bikes suggests:
"Look, people here must feel comfortable carting around their children by bike!"
"Look, there are people here who even replace their trucks with bikes!"
"Look, it must be okay here for bicycles to take up lots of room on the road!"
And of course when people see signs that something is okay to do because it looks like others do it, they are more likely to consider doing it themselves. So even if they do not need or want a cargo bike per se, they may be more likely to look into cycling with their children, cycling with baggage, cycling on the road, and other aspects of transportational cycling because these ideas are suggested by the mere existence of cargo bikes.
I suppose a simpler way of saying what I am trying to say might be that cargo bikes are symbolic of a strong, healthy "bike culture." Going with this premise, I am pleased that more of them are popping up in Boston and wish the industry would take note. What about your city?
Labels: Boston cargo bikes