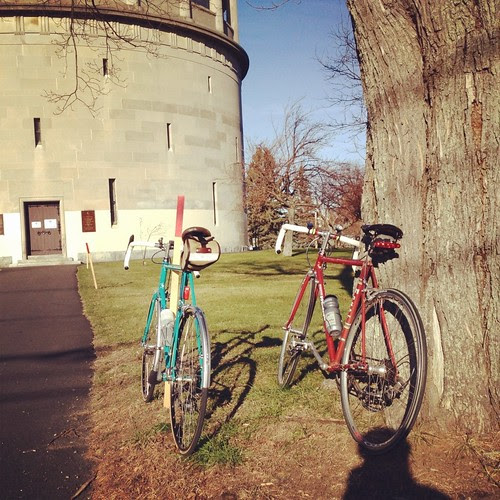 Over the summer, one of our local bicycle clubs runs what's officially known as the (In)famous Wednesday Night Hill Ride: a loop "encompassing the gnarliest hills in the Boston Metro area." Of course the route does not belong to them and lots of local cyclists who want to cram some serious hills into a relatively short ride use it to train on their own time, particularly racers and randonneurs. Back in July Somervillain began riding this route with a small group as practice for the D2R2 and invited me to join. At the time the very notion was laughable. Me, on the Infamous Hill Route? The women's paceline rides were hilly enough for me, and those were described by the same bicycle club as "mostly flat" (ha!).

But definitions of "hills" are subjective. Fast forward a few months, and mine too had changed. Having gone on a handful of rides with some strong local cyclists, I even developed a new fondness for hills and no longer outright hated them. So when Somervillain suggested the two of us try the Hill Route before the snow arrived, it suddenly seemed like a great idea. What can I say? I am human, I got cocky. 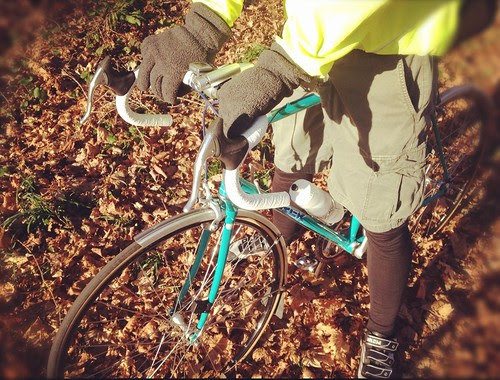 Things started off innocently enough. My level of excitement was almost festive. Finally, I was going to do "real" hills, like the "real" roadies. I managed to get organised and dragged myself out of the house to meet Somervillain at an ungodly morning hour. The temperature was blessedly mild in the high 30s. The sun arose picturesquely over the local Dunkin Donuts parking lot as we convened in front of it on our trusty steeds: he on his '80s Trek racing bike, I on my Moser. It was going to be a great ride! A nice 30 mile ride with some hills in the middle. As we took off, I had a smile on my face (hint: it did not last).

Let me tell you about the Hill Training Route. The part with the proper hills is a 12 mile loop and the elevation profile looks like this. But no technical description or chart can communicate the subjective experience of this ride. The build-up was uninspiring, as we cycled along some ugly main roads with fast suburban traffic. After about 10 miles of that, we turned onto a narrow residential street and began the first climb up a small mountain. The climb began suddenly, and, being out of sight from the main road, there were no visual cues that allowed me to psychologically prepare for it. We turned the corner, and bang! - the very turn itself was already the beginning of a steep, twisty hill. The narrow road wound around the mountain instead of going directly up it, so there was no way to see what was around the bend. Would it get steeper or let up a bit? And how much longer to the top? Not knowing this drained my self-confidence and increased my anxiety tenfold. In addition, there were potholes the size of craters, and I had to zig-zag gingerly around them as I climbed. 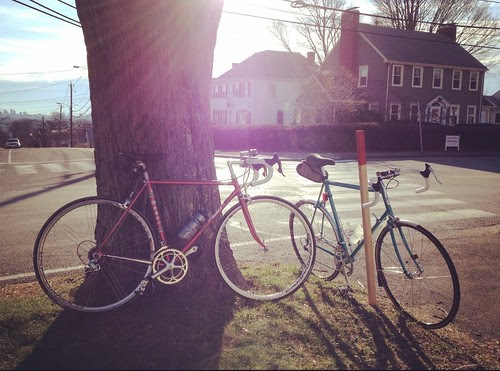 My bicycle is geared fairly high (52x39t in the front and 12-26t in the rear), but still I did not expect to max out my gears quite so early on. Click-click-click! Click! And I was done. From that point onward there was no spinning, only pushing, and I still had most of the hill ahead of me. So I pushed on the pedals and heaved myself forward in jolts.

Promptly, my body began to rebel. A pain shot up straight to my right temple, so intense that it clouded my vision. I had a strong urge to throw up. My leg muscles felt as if someone was injecting them with acid. Somervillain was way up ahead of me and around the next bend. I felt intense shame at being so hopelessly terrible at this, even after all the rides I've done to build up to it. I did not see how I could possibly keep going at this rate, and only a stupid, primitive sense of pride kept me pushing. Thoughts such as "Do not stop the bike!" and "Like hell you're going to walk!" were the only things circulating in my otherwise empty mind. 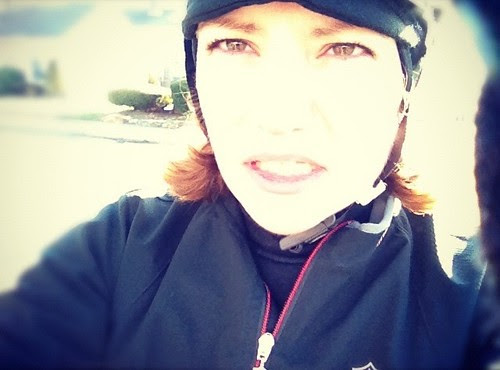 At the top I felt nothing. No elation, no sense of accomplishment. Maybe some anger at my naivite ("You needed to do this, did you? Racers describe this ride as "infamous" and you decided this meant it was suitable for you?"), but otherwise nothing. I drank water and looked around blankly for Somervillain. Somehow I'd managed to lose him. Could he have taken a different side street to descend? I cycled around the maze of streets along the side of the mountain, climbing some smaller hills for no reason other than to keep warm. I was now shaking violently. Then it occurred to me that we both had phones. I phoned, he picked up immediately, we realised what had happened to separate us and agreed to meet back at the base of the hill. It was pretty apparent to me that I could not continue the ride, and he could hear it in my voice as well. I cycled down to meet him with my head hung low and my face a deep crimson.

I am not entirely sure how we ended up repeating the climb (yes, you read that correctly). I think it may have started out as a suggestion in jest. But long story short, we climbed the same hill again. Oddly it went easier the second time around, despite my utter sense of depletion. Maybe knowing what to expect made it easier. Once again I maxed out my gears and pushed myself up in jolts the whole way, but with a clearer sense of when to expect an end to the hellish ordeal. In the last stretch, my breaths were coming out in audible heaves: Hee! Haw! Not unlike the sound of a tortured donkey. And then again it was over. At the top we stopped in a parking lot behind a small, shabby water tower. I tried to eat a piece of an energy bar, but nearly threw it up. I did drink more water and kept that down. My hands were trembling. We agreed that we were done for now: descend carefully, then back to Somerville. Two difficult climbs was not so bad given my lack of experience. 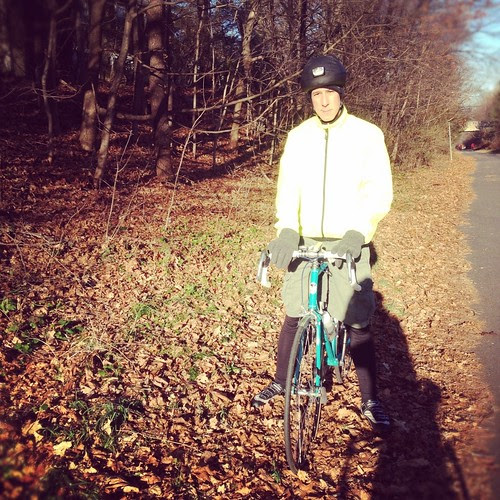 Cycling home, we transitioned to the Minuteman Trail and enjoyed the glorious sunshine. We chatted casually about this and that and began to contemplate where would be the best place to stop for coffee.

And then I opened my mouth and said: "You know what? I am not tired anymore. This always happens, I begin to feel more energetic at the end of a ride."

And he said: "Oh yeah? Do you feel like going back and doing the last climb of the route then? We have time before I need to be at work."

And I said... Well, what could I say. I couldn't exactly back out of it at that point! So we rode to Arlington Heights for the last climb. 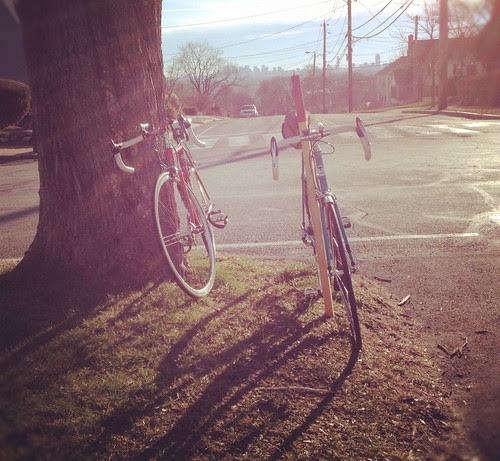 This climb was very different and I am so glad I did it. It was a big, open road that went straight up instead of winding, and I could see exactly how far it was to the top. It was a steep climb of about a mile and again I maxed out my gears fairly early on, but somehow it was just a more rewarding experience. This road had nice scenery and a more pleasant atmosphere; I just felt better riding there despite the same horrible pain in my legs and the same shortness of breath. Seeing that I had about a mile of this ahead of me, I somehow "settled into" the climb and relaxed. The entire time I was thinking "Oh my God, am I actually... enjoying this?" Somervillain was way ahead of me of course, so I had no illusions about my speed. When he stopped at the top and turned around to check how I was doing, I gave a thumbs up and smiled. 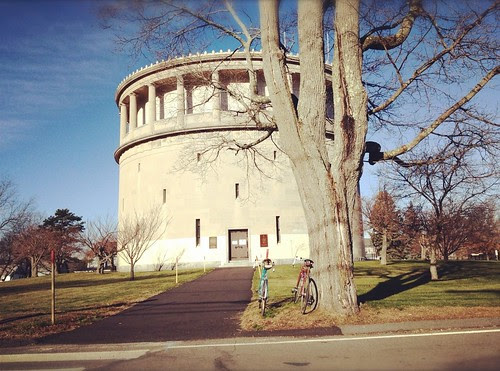 Upon reaching the top, I was delighted by the sight of a beautiful stone water tower surrounded by a small park. I had never been here before, and it's always nice to discover a new scenic spot. Suddenly, everything began to seem okay, even funny. It wasn't so bad. I really should have done the middle two climbs of the route instead of bailing so early on. To make me feel better, Somervillain pointed out that we'd really done more like 3 out of 4 climbs, since we did the first one twice. Plus we'd cycled 30 miles over all. Let's call it a modified route. After taking some pictures, we descended down a monstrous hill with a view of the Boston skyline, climbed another short but steep hill, and then cycled home for real with a quick coffee before parting ways.

On my way home I stopped by the Co-Habitant's office to say hello. He laughed and said I was incoherent, clearly still coming down from a post-cycling high ("and then... and then... there was a TOWER! And I almost gave up, but... tower!")

Sigh. I guess I should be grateful that even in my 30s I can enjoy the little things. I am pretty terrible at this roadcycling stuff, especially hills. But God, I love it anyway. We'll be doing this ride again. And thank you, Somervillain!
Labels: bike friends Moser ride reports roadcycling