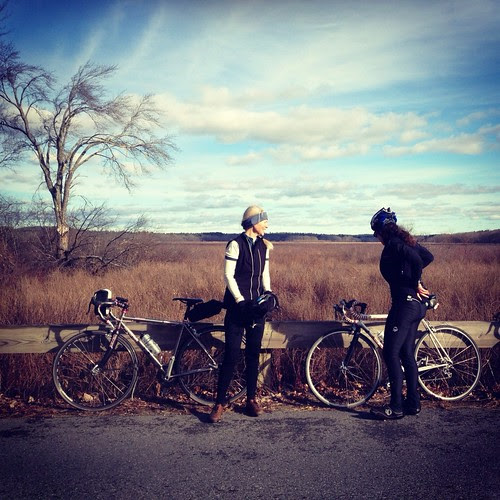 Two days after struggling through a hill training ride last week, I found myself on the bike again - doing what ended up being a 52 mile ride counting my trip there and back. 50 miles seems to be the magic number at the moment: shorter than that and I am left feeling regretful; longer than that and I become more aware of the difference between myself and the stronger riders I am with. Interestingly, I have not gone on a proper ride on my own for over a month: I've met so many cyclists to ride with lately, that I am always with someone. Among the benefits of this is discovering local roads that I've never ridden before - and noticing what an enormous role landscape plays in how subjectively easy or difficult a ride feels.
Riding with the Ride Studio Cafe women last week, we did a loop that on the map appeared near-identical to a route I usually do alone, only along the back roads. The landscape, bathed in the ethereal late-December light, was so stunning that I did not notice the miles or the hills. Where were we? These hardly looked like the tired suburbs I had become so familiar with. Here moss-covered trees grew out of green bogs under cerulean skies. Sleepy farms peaked out coyly from the mist. The remains of frost on dried grass turned meadows into expanses of delicate lace. The sun shone through black, leafless branches, casting high-contrast shadows upon the road. We rode under canopies of fragrant pine trees, which then opened up to reveal enchanted vistas. Climbing one particular hill, I felt such a surge of emotion from the surrounding beauty, that I could not help but go faster. The desire to reach the top and see what more awaited there, made the bike feel weightless.
Roadcycling for me is not about suffering. It is about this emotional connection. Somehow the feel of being on the bike, the sensation of speed, and even the pain in my legs become associated with the reward of seeing an affecting landscape. Once it forms, the association is difficult to break, and it makes cycling addictive - apparently not just for me. Some of my riding partners are experienced racers and randonneurs, and when I listen to them describe rides I notice that they rarely speak of difficulty or pain. Words such as "epic" and "sufferfest" are simply not in their vocabulary. It's not because they don't feel pain and exhaustion, but because they do not consider these sensations to be the point. It's about fulfillment through a visceral connection with one's surroundings. The rest is not important.
Labels: ride reports roadcycling stories