The Bobbin Birdie Lands in America! 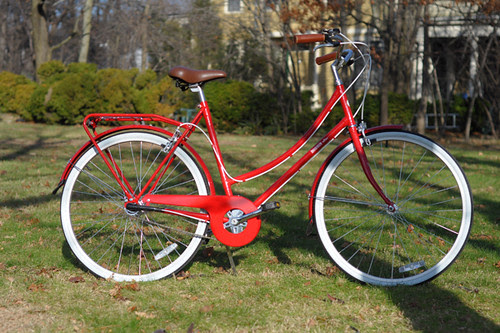 It was back in September at Interbike that I first saw Bobbin bicycles in person and learned that they would soon be available in the USA. Excited by these news, I talked to the distributor and they've now sent a demo model to Harris Cyclery, inviting my feedback. This week I finally had a chance to ride and photograph the bicycle. Bobbin Bicycles started out as a traditional bike shop in London (humbly advertised as "the most beautiful bicycle shop in Britain"), then developed a house brand of its own, eventually evolving into a full fledged bike manufacturer offering a range of models and accessories. I have followed these developments with interest, and it isn't difficult to see why the brand appeals to me: In their own words, "Bobbin reinvents romantic notions of traditional upright bicycles and makes them relevant to modern life." They are also quite budget-conscious, aiming to be affordable for the student and young professional. Oh and the loop frame models are lugged. I was very much looking forward to trying a Bobbin. 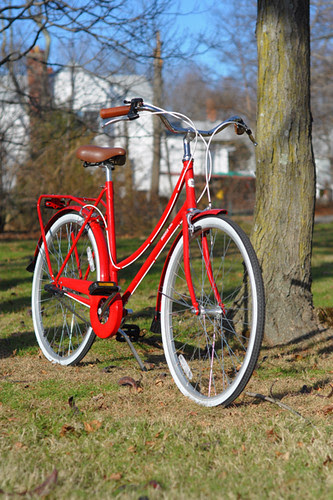 The model I received is the Birdie, in red. It's a lugged steel 3-speed with 26" wheels, rim brakes, fenders, a partially enclosed chain, a kickstand, and a rear rack. While Bobbin does offer bicycles equipped with a fully enclosed chaincase and hub brakes, the Birdie is presented as a more paired down, "jaunty" model. The frame is described as a combination of hi-ten and cro-moly tubing, made in Taiwan. The weight is 37lb as shown. The paint is liquid coat, applied via a multi-stage dipping and curing process that includes rust-proofing. 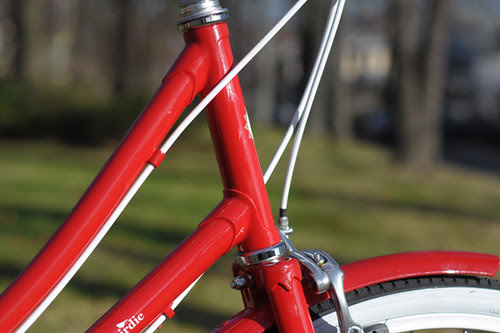 To my relief and delight, the Birdie frame is indeed fully lugged. 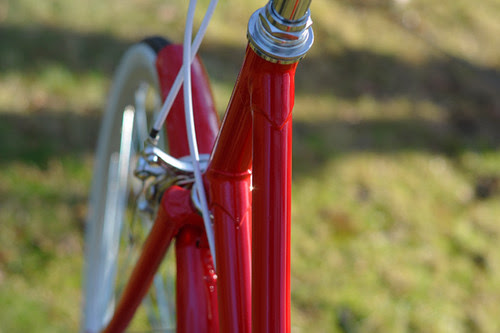 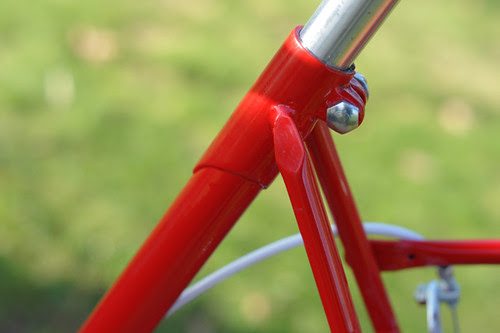 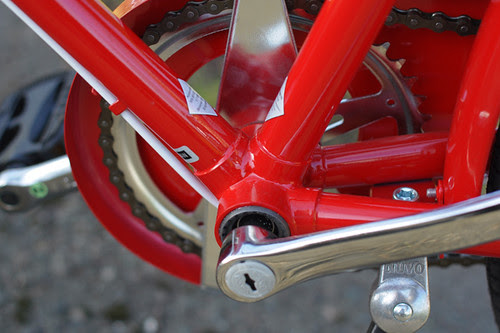 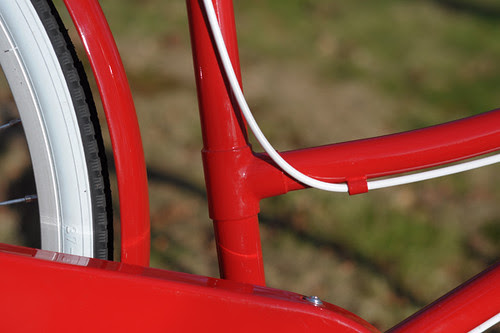 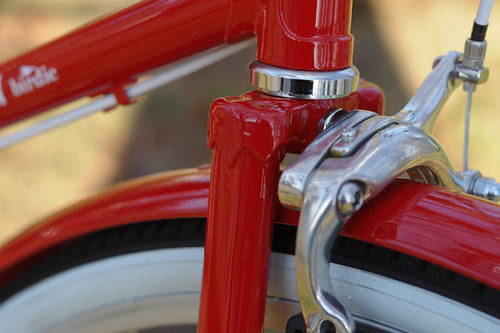 Fork crown. Bobbin are not trying to reinvent the wheel with this bicycle: It is basically a remake of a vintage 3-speed circa the 1950s-70s, made somewhat lighter with the help of modern tubing and components. 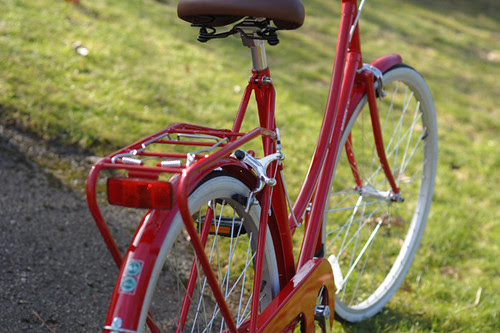 The classically-shaped rear rack is nicely integrated with the rest of the bicycle, painted body colour. The rack's tubing is not oversized and will accommodate a variety of modern pannier systems. 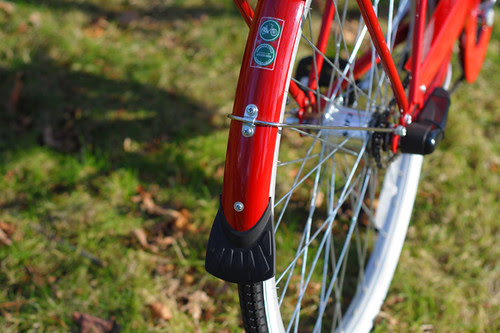 There are tiny plastic mudflaps on the front and rear fenders. 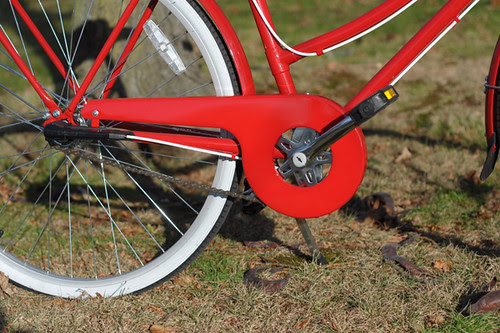 The partial chaincase encloses the chainring and the upper portion of the chain. 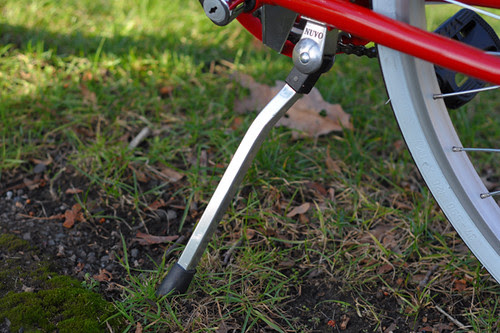 The rubber-footed kickstand is sufficiently sturdy. The handlebars are a contemporary version of North Roads, set up with classic city brake levers, a Sturmey Archer 3-speed shifter, and not at all unattractive pleather(?) grips. 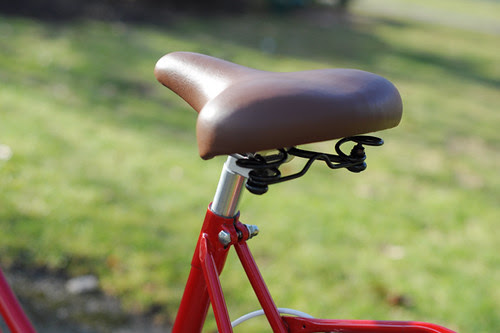 The sprung padded vinyl saddle matches the grips in colour. 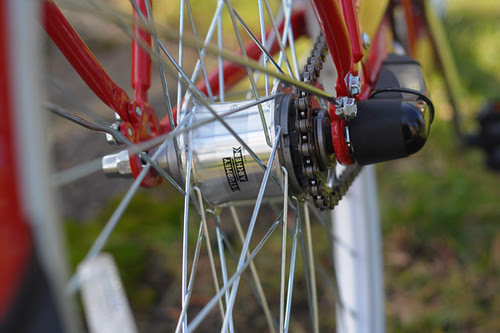 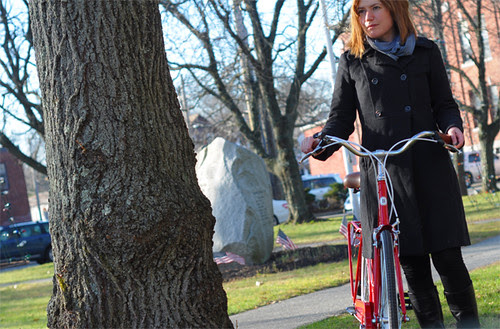 This bicycle photographs extremely well, with the glossy red paint and the classic lines lending a "glamour shot" vibe to the images. In person it comes across as more subdued. My first impressions were of its relatively light weight and subjective "smallishness." The 26" wheels, thin frame tubing and bright paintjob made it look almost like a children's bike and I felt as if I were handling a toy, which was actually kind of fun. But the size (19" frame) felt like a good fit.

I tested for toe overlap and was glad to discover that there was no chance of it. Then I rode the Birdie for about 5 miles on mildly hilly suburban roads with car traffic. This has become my standard distance and terrain for test riding upright city bicycles, and I think it is representative of how such bikes tend to be ridden in real-life circumstances in the US. 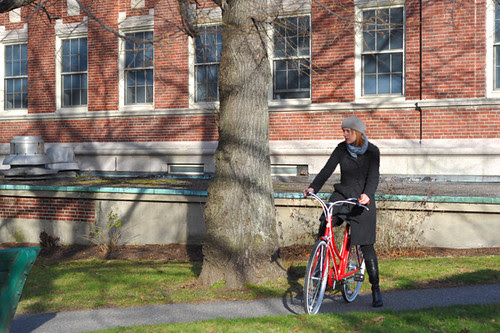 Riding the Bobbin Birdie, I found the manufacturer's term "jaunty" to be apt. This is not a sluggish bike; it feels light and zippy. It accelerates and retains momentum nicely. Mild hills were not a problem. The gearing felt just right: not too high and not too low. The bike felt stable and tame enough for a beginner; not twitchy at all. Compared to a Dutch bike, the ride quality was on the harsh side, but I say the same about most city bikes that aren't fitted with balloon tires.


Speaking of tires, I do not care for the ones on the Birdie. I have no good explanation for this, other than that they felt a bit "cheap" and narrower than the described 35mm. Replacing them with nicer tires should be easy enough. I have a feeling that a pair of Schwalbe Delta Cruisers would improve the ride quality as well. 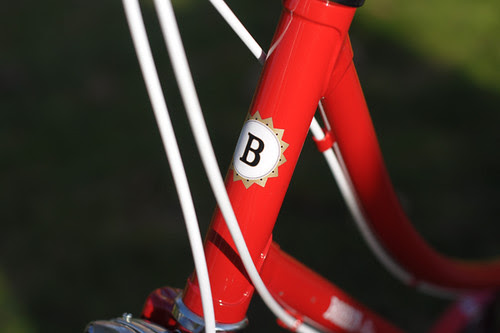 Overall, the Birde was a fun and very "normal" ride; nothing about the bike's handling frustrated me or struck me as being off. Speaking more generally, I think for the price ($650 retail at the moment), this is a good deal. For all those who have been pining for an affordable fully lugged bicycle, here it is. It looks to be decently made, uses solid components, handles well, has no toe overlap, includes a sizeable rear rack, and is not bad looking to boot. The absence of integrated lighting should be noted. And the rim brakes could be a concern if you live in an area where it snows in winter and plan to ride the bike year-round. But as far as the basic character of the bike and its ability to transport the cyclist's belongings, the Bobbin Birdie works for me.

Bobbin's full line of city bicycles will soon be available in shops across the US and Canada, and those interested should check with the distributor for stock lists. If you are local to the Boston area, the specific bicycle pictured here is available for test rides at Harris Cyclery in West Newton, MA. I plan to ride it at least once again - when it starts snowing - and will post an update on how it handles in winter conditions. If you happen to already own a Bobbin, please do share your impressions.
Labels: bicycle reviews budget bike loop frame