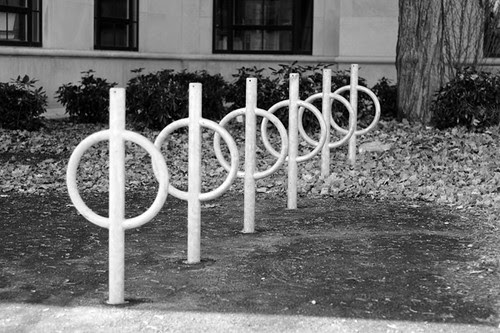 Although there are plenty of complaints about the lack of bicycle parking here, my impression is that the greater Boston area is better than many places in this respect. There are bicycle racks all over shopping districts, outside post offices, libraries and prominent places of business, next to transit stations, throughout college campuses. But I notice that cyclists do not always choose to use the racks, preferring to lock their bicycles to alternative structures instead. There will sometimes be a rack that is almost entirely empty, and nearby there will be some bicycles locked to trees and sign poles. 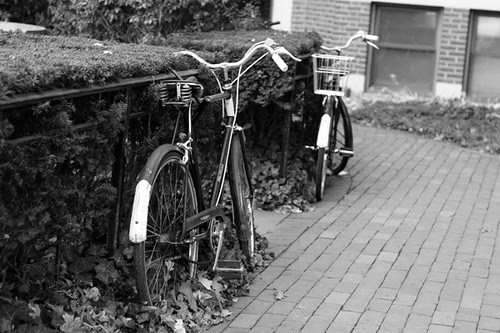 The other day I saw a group of cyclists locking up their bikes outside a cafe - each one of them ignoring the racks and going for random other structures. I commented about it, and we had an interesting conversation. Here are some of the reasons they gave for not using the racks provided:
. Transportation bicycles with big tires, fenders and headlights don't fit some types of racks.
. The "tethering post" types of racks that are installed along sidewalks are often placed too closely to the road, and careless drivers can damage bicycles with their cars when parallel parking.
. These racks can also stand too closely to pedestrian lines of travel, and people bump into the parked bicycles when walking past them, sometimes knocking them over.
. Others lock their bicycles too closely to yours, scuffing or scratching it, or even knocking it over in the process.
. Bicycle racks attract thieves, since that is where they look for bicycles and where it is easy to get multiple bicycles at a time.
Some of these points reflect my own experiences. There are racks I cannot use, because my bike won't fit except locked to the very edge (a spot that is usually already taken by another bike with the same problem). And while this has not happened to me, I have seen cars hit bicycles locked to those individual racks they place along the edge of sidewalks. Pedestrians brushing against my bike and others' bikes scuffing it is less of a concern, because I don't baby my transportation bikes. And I had not given much thought to the possibility that bike racks could attract thieves.
While not all of these issues are solvable, they are worth addressing when installing bicycle racks. It's a shame when resources are spent to create racks that cyclists find unusable.
Labels: Boston locking up urban cycling