Where Was Your Bicycle Made? ...and Does It Matter? 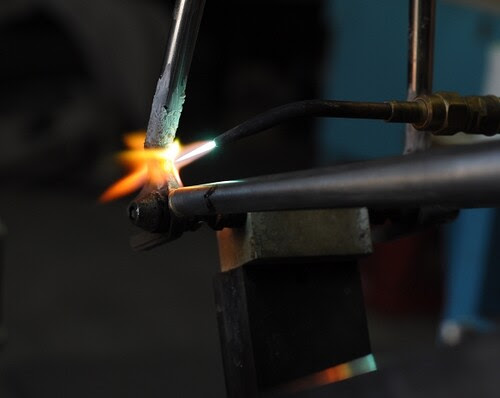 There are those who object to bicycles built in the Far East (specifically, China and Taiwan*), and the objections tend to fall into three categories. First, it is possible to get very cheap (as in both inexpensive and poor quality) goods mass-produced in that part of the world. So "made in China/ Taiwan" is interpreted as synonymous with flimsy, "soul-less" production methods and low quality materials. Second, the same factories that practice these production methods typically also have labour laws that are considered inhumane by western standards: long hours, low wages, child labour, air toxicity. Finally, these factories tend to use environmentally unfriendly processes, dumping pollutants into the surrounding landscape. These concerns have, understandably, made some wary about buying products made in that part of the world, bicycles included. However, they have also led to overgeneralisations and misunderstandings that result in unfair prejudices.

Aside from the obvious point that Taiwan and China are not the same, one thing to keep in mind when considering where your bicycle was made is that geographical locations are not factories and knowing the country of manufacture alone does not tell you much. Certainly there are factories in Taiwan where flimsy, generic bicycle frames are mass-produced in poor conditions. But there are also factories that employ highly skilled artisans, use quality production methods and the best materials, pay working wages, and are environmentally friendly. Typically, one can easily tell the difference by looking at the end product. And the cost of manufacturing differs considerably, despite both types of factories being located in Taiwan.

Many of the best bicycle manufacturers today outsource at least some aspect of frame production to Taiwan. These include favourites such as Rivendell, Retrovelo, Workcycles, Pilen, Soma, Surly and Velo Orange, among others. These manufacturers have close relationships with the "good" kind of factories there. The resulting products are indistinguishable from domestic products in quality, because the same processes and materials are used, and because the manufacturer's specs are followed with precision.

We tend to assume that outsourcing is a cost saving measure, but it may surprise you to learn that cost is not always the reason for turning to Taiwanese production. One very real problem, is that there is a shortage of European and North American factories capable of producing bicycle frames at high volume. This is an issue manufacturers almost inevitably run into when they begin to expand production. The remaining old-school builders are small and are often unable to expand their workspace, buy additional equipment, and hire sufficiently skilled employees. There are some factories in Eastern Europe - namely Poland and the Czech republic - that are more versatile and can handle medium volume, but it's still often insufficient. Short of establishing their own factories domestically from scratch at astronomical costs, going to the Far East can be the only viable option for manufacturers. Furthermore, some manufacturers complain that the domestic factories they've tried produce inferior work to the "good" Taiwanese factories, and claim that moving production to Taiwan is a means of improving quality.

All of this is not to "defend" Taiwanese production, but to give my readers a better sense of what it actually means, so that they can make more informed decisions regarding their own stance on this issue. Personally, I prefer it when a bicycle is made as part of a small production run, by hand, and within a culture that I have some personal connection to. It's just more interesting to me that way. But I have nothing against Taiwan or China per se, as long as the specific factory provides good working conditions, employs environmentally safe practices and uses high quality methods of production.

On a separate note, I also feel that manufacturers should clearly and truthfully disclose where and how their bicycles are made. If they are going to go the Taiwan route for the very legitimate reasons described, then they ought to "own it" and not obfuscate the fact. It annoys me to no end when manufacturers boldly state on their websites that their bicycles are "proudly built in European Country X" only to reveal in some obscure small print buried deep on their site that the frames are made in Taiwan, and what they really mean by "built" is "designed and assembled." It leaves a bad taste in my mouth when manufacturers come across as trying to hide or distort the facts in this manner.

What are your thoughts on the subject? Does it matter where, or how your bicycle is made?

---
*ETA in response to some of the comments: This post does not mean to imply that I believe the People's Republic of China and Taiwan to be politically similar, or to have the same labour and environmental standards. I include both countries here, because people do group them together under the "made in the Far East and therefore bad" label (from which, interestingly enough, Japan is now exempt). And while factory conditions in Taiwan are typically better than those in China, the point of this post is that country does not matter. It is possible for a "good" factory to exist in China. It is not about labeling geographical locations as good vs bad, but about being aware of what process is used - regardless of location.
Labels: bicycle industry framebuilding Geekhouse