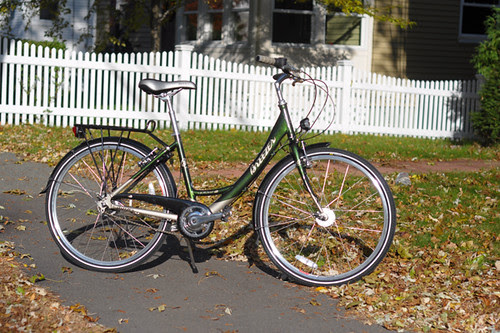 Since the start of this blog, I've received more requests to review the Breezer Uptown than any other city bike on the market. I have not done so earlier for two reasons. First, availability: Until now, I had not seen the Breezer for sale in any local bike shop. After a break of several years Harris Cyclery now carries them again, which is how I came across this one. But additionally, I was reluctant to review a bike that I was unenthusiastic about: the Breezer has never appealed to me, and I have no interest in it other than general industry curiosity. However, I would have said the same about Seven Cycles a year ago, and trying one of those (in response to readers' requests as well) had a profound effect on me as a cyclist. I also unexpectedly liked the Urbana, which I tried for no reason other than the manufacturer's urging. In short, you never know and it's good to keep an open mind. That is how I approached my test ride of the Breezer Uptown. 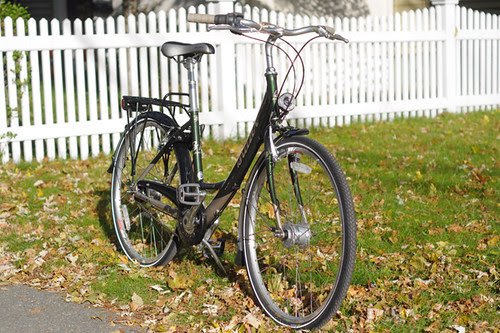 The Uptown is Breezer's fully equipped commuter model, available in 3-speed and 8-speed variants. The bike includes fenders, a chainguard, a rear rack, a kickstand, an integrated rear wheel lock, and front and rear dynamo lighting. 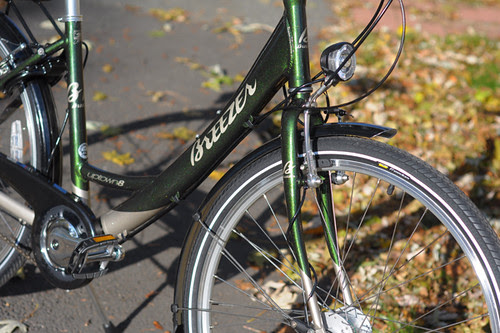 The welded aluminum U-frame has "unitube" construction. Steel unicrown fork. The 26" wheels are fitted with 1.5" wide tires. I tried the 17" sized frame. There are other sizes and also a diamond frame version. Please see here for full specs. 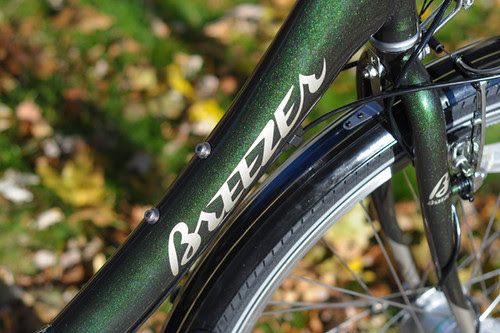 The colour is a deep, sparkly forest green, with contrasting silver panels on the chainstays, near the bottom bracket, and on the fork. The two-tone paint job gives the bike a sporty look that strikes me as being at odds with its purpose as a commuter. But the dominant green colour is pleasant. 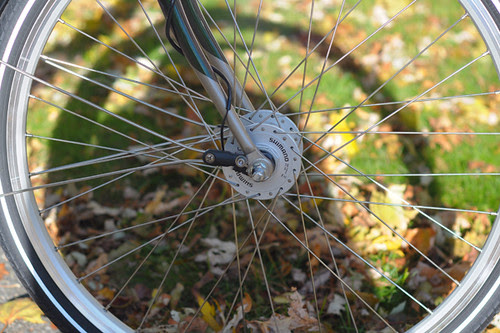 As far as functionality, it must be said that this bike is excellently equipped for commuting. Front and rear dynamo lighting seems to be of good quality and is internally routed, exiting through the rear fender for the tail light. 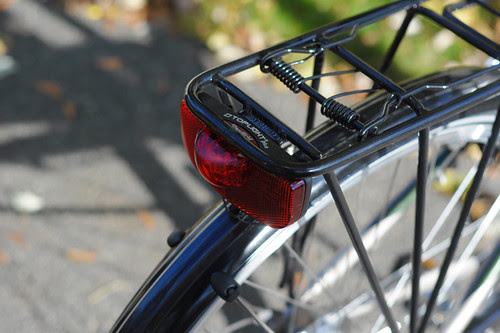 The rear rack's tubing will accommodate a variety of pannier systems. 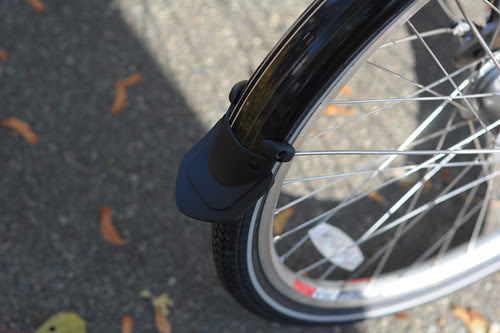 The tires are wide. The fenders provide full coverage and include small plastic mudflaps. 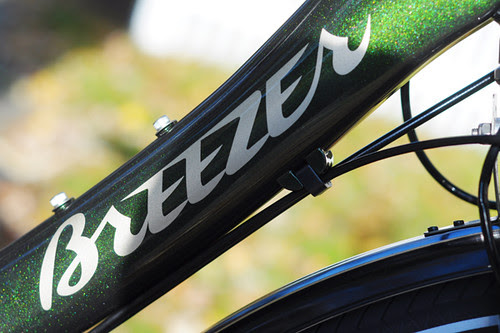 There are braze-ons for the shifter and brake cables, so that nothing is hanging loose, and there are waterbottle bosses. 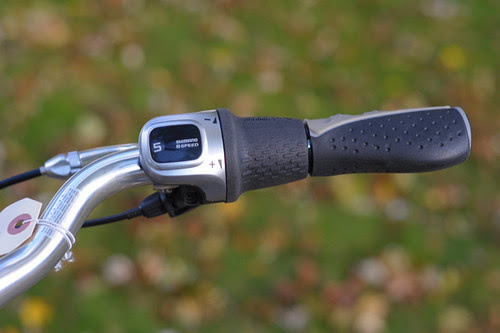 The wide range Shimano 8-speed hub could be attractive for hilly areas. The shape of the handlebars provides a sufficient gripping area despite the twist shifter. 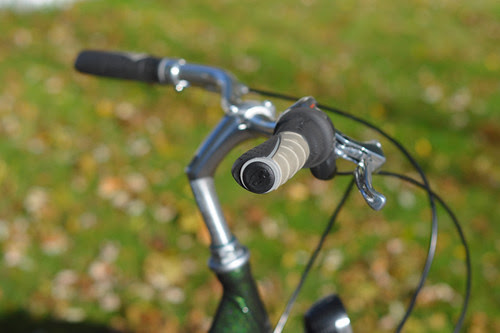 The handlebars are mildly swept back. The brake levers are comfortably placed, and the front and rear v-brakes provide strong stopping power. 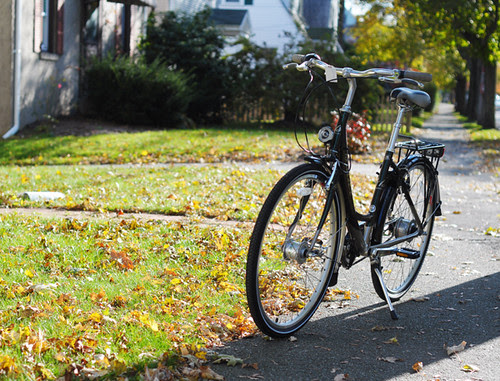 All of these features, for a retail price of $980 (or $720 for the 3-speed model), make the Breezer Uptown look undeniably good "on paper." This is the kind of commuter bike you are likely to find in a mainstream European bike shop today - modern, affordable, fairly lightweight, designed to be ridden in everyday clothing, and fully equipped - and it's great to see the same available in the US. 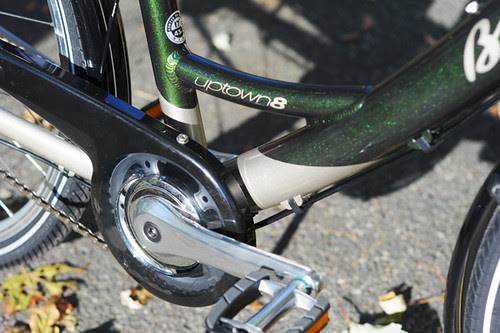 Having said that, I did not like this bike on a number of levels. From an aesthetic and emotional standpoint, I found the Breezer to be "unlovable." The huge welds, the hollow feel of the aluminum tubing, the athletically-inspired colour scheme -  it all feels so generic and impersonal.  I like a bicycle with some warmth to it, with some evidence of a human touch, and I just don't feel any sense of this from the Breezer. It's not just about lugged vs welded and steel vs aluminum, but about the very essence of how the bike feels to look at, to touch and to ride. This is truly the vacuum cleaner of bicycles - and while for some that's a good thing, for me it's uninspiring. 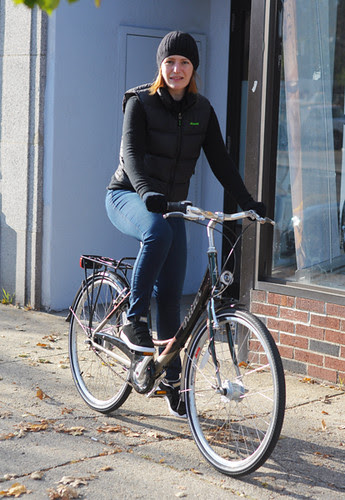 But more importantly - and more disappointingly - the Breezer's ride quality did not work for me. I rode it for about 3 miles and already felt the sort of strain in my knees that I've experienced on bikes with the infamous "comfort" geometry. This could also be because I would consistently end up in a gear that was too high: I found that being in too high of a gear was the only way I could make the bicycle go at the speed I wanted. In a gear where my cadence felt appropriate, the bike would not move fast enough for my liking.
Additionally, something about the relationship between the seat tube angle and bottom bracket felt "off," and after examining the frame geometry online I still do not know what. Subjectively, it felt as if the seat tube angle was extremely steep - almost a straight drop from the saddle down to the pedals - which contributed to the knee discomfort, but, oddly, failed to add to pedaling efficiency. According to the frame specs, the seat tube angle is actually 72 degrees, which is entirely normal for a city bike. I do not know how to explain my subjective sensation of steepness in light of this.
Aside from these issues, I thought the bike felt rather harsh going over bumps and potholes. Not horrible, but definitely not great. Even on smooth terrain, I felt road buzz through the handlebars, which became painful for my (overly sensitive) hands fairly quickly. Maybe wider tires or a suspension fork would help here. 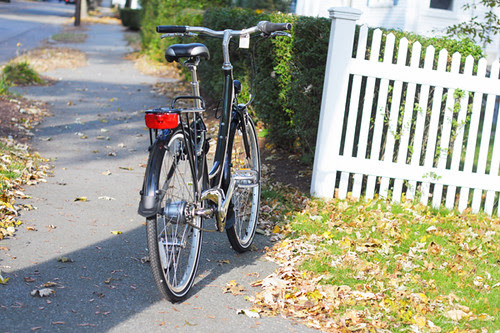 On a positive note, I thought the Breezer Uptown was solidly put together and truly functional, unlike other bikes that only play at being fully-equipped commuters. It was also stable and well-balanced, and there was no toe overlap on the 17" frame. This bike should be easy to handle for a novice transportation cyclist.
When it comes to impressions of ride quality, everyone is different, and I urge you to take that into account when reading my earlier feedback. I know there are people who love this bike and commute on it daily, so obviously it is possible. The manufacturer's history is also quite interesting (lugged mountain bikes!), and worth looking into. Would I buy a Breezer Uptown for myself? No. But if the ride quality works for you and you find the bike attractive,  I agree with those who call it a good value.
Labels: bicycle reviews test rides