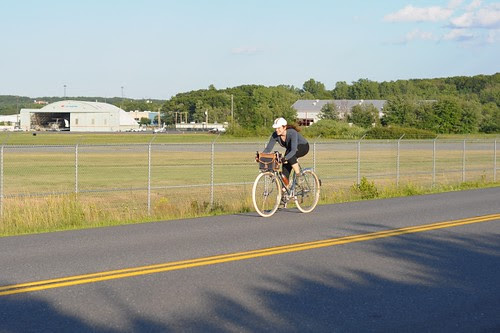 While I'd heard cyclists speak of rider fatigue in relation to bicycle frame design and ride quality, I did not understand what exactly this meant until I got a chance to experience and compare a number of different bikes myself. Riding a variety of bicycles over the same routes, I've noticed that some make me more tired than others independent of the ride's intensity. I can be cycling strenuously on Bike A and really feeling it in my leg muscles, yet remain energetic for the duration of the ride and even feel "refreshed" rather than tired at the end. Or I can be cycling at a moderate speed on Bike B and not exerting myself much, yet feeling more worn out than during the more strenuous ride on the other bike.

A reasonable assumption would be that a heavier and slower bicycle would be more fatiguing than a lighter, faster one, but for me that is not always the case. It seems to have more to do with how the bike feels on the road. When a bike does not do a good job dampening road shock, I begin to feel exhausted very easily. I also seem to be sensitive to a bicycle frame's tubing, because some bikes just feel more effortful to propel forward than others, despite similar geometry, size and fit. Oddly, positioning does not seem to have as much to do with it for me as these other aspects: Some bikes I can ride for a long time in an upright position and some bikes I can ride for a long time in an aggressive drop-bar position, whereas on other bikes these very same postures begin to feel exhausting sooner.

What has been your experience with fatigue on different bicycles? Have you noticed any patterns or connections? I suspect that there is no one formula to this. No doubt it is a complex interaction between a number of factors, including individual anatomy.
Labels: framebuilding Geekhouse ride quality