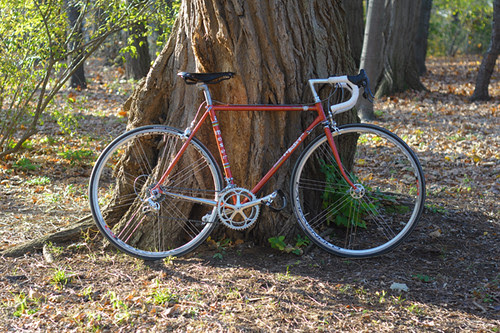 I have been riding my "new" Francesco Moser for a couple of weeks now and wanted to share my impressions. This is the same frame that I rode last year as a fixed gear conversion, then sold, then bought back and rebuilt as a geared roabike with modern components. Since the summer, I have been vigorously shopping around for a road/racing bike for 2012. The Moser resurrection is an experiment to determine whether it is feasible to refurbish a vintage steel racing frame for this purpose without putting myself at a disadvantage in comparison to cyclists riding modern bikes. 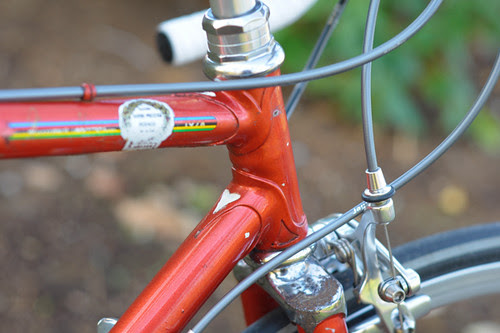 The Italian frame was built in 1978 and raced in Austria throughout the 1980s. Through an interesting coincidence, I happen to know who the framebuilder was, but that is another story. The frame is lugged steel and allegedly Columbus tubing. Whether "tretubi" or something nicer I do not know; there are no decals. The lugs are pointy with elegant cutouts. Chromed fork crown, dropouts and seat stay caps. I have not been able to find this exact model in a Moser catalogue; something is always different. As I understand it, Moser frames were handmade in small batches and the framebuilders would sometimes get creative with individual frames. This could be one of those. 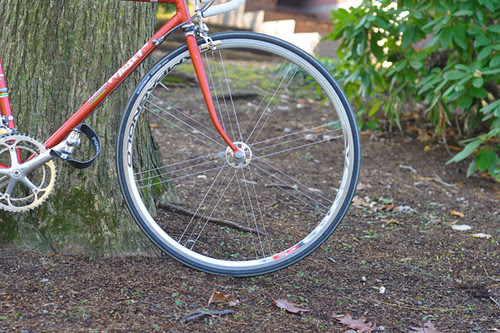 The current incarnation of the bicycle includes an older Campagnolo Vento wheelset. Retired by the previous owner, the wheels have got quite a few miles on them, but are in good shape. 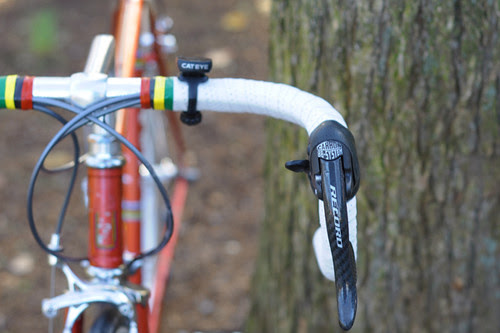 The crankset is 52/39t with 175mm crankarms. Not ideal in the long run, but at least it will allow me to try the bike. MKS Stream pedals and Power Grips as usual. 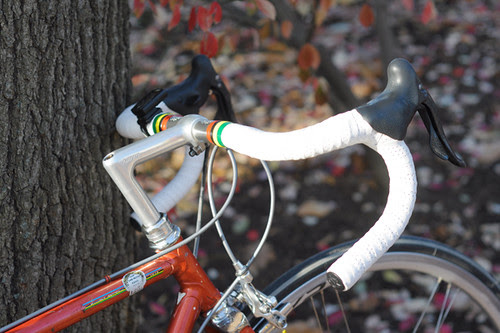 From my spare parts, the bike is fitted with an 11cm Nitto Technomic Delux stem and 42cm Nitto Noodle handlebars. White Fizik tape. Cateye computer with a cadence reader. Just to be silly, I finished the handlebar tape with thin strips of multi-coloured electrical tape, to match the "champion" bands on the frame. 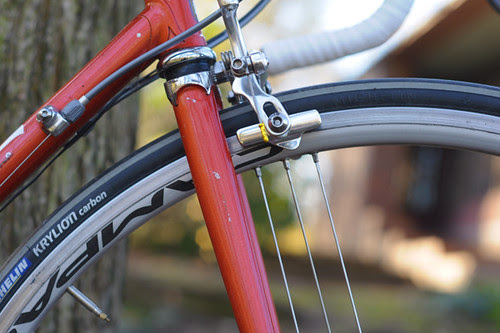 I bought a set of Campagnolo Veloce brake calipers and used the 700Cx23mm Michelin Krylion tires that I had on another bike earlier. 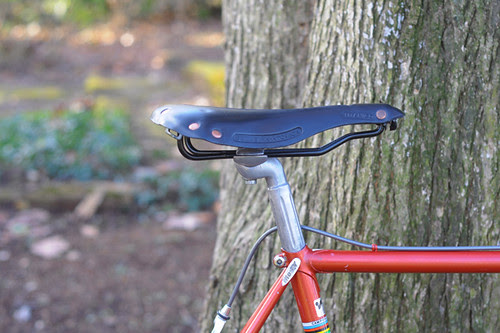 The saddle is a new generation Selle Anatomica Titanico (with cro-moly rails), on loan from the manufacturer. I will be comparing my impressions of this model to those of the previous version. 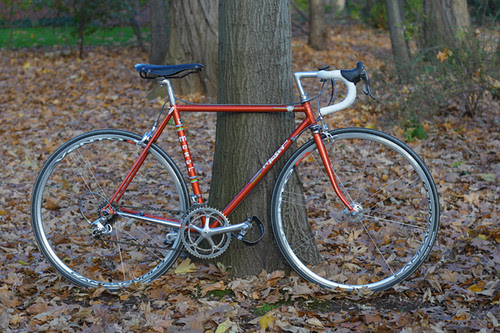 The bicycle is a 52cm frame with a 53cm top tube (closer to 52.5cm). Right now it is set up with an 11cm stem, handlebars 1cm below the saddle, and the saddle positioned to emulate the seat tube angle with no setback. The positioning feels great, but would probably feel even better with the handlebars a bit lower and the stem a bit shorter (the current stem cannot be lowered, because there is no more space inside the headtube). The weight of the bike as shown here is 21lb.
One reason I decided to get this frame back instead of looking for a different one, is that I remembered it having no toe overlap. Later I began to doubt myself, as several framebuilders told me that it might be impossible to make a road/racing frame this compact with no TCO. However, now the Moser is back and I was right: no toe overlap, as in none/zilch/zero/not-even-close. How did they do it? I will try to bring this bike to a framebuilder with one of those magic machines that can measure frames precisely; hopefully that will provide some answers. 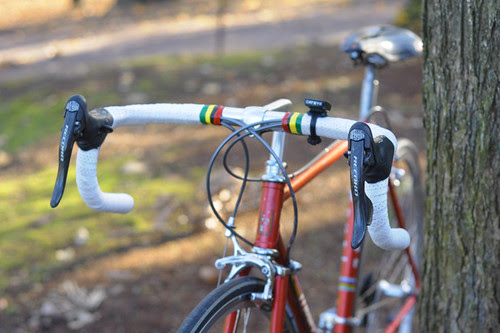 So, riding Moser 2.0 so far... I think I got exceptionally lucky with how well this frame suits me. I did not fully understand or appreciate what it was until now. With the long stem, the geared drivetrain, and the lightweight modern components, the bike feels as if it has been unshackled and allowed to soar. The small size feels just right, the forward positioning is exciting, and the lack of toe overlap eliminates my main source of anxiety with small frames. The bicycle feels lighter and easier to propel forward than other steel roadbikes I've tried, including modern ones. Judging by the numbers on the computer, my speed when cycling on my own is more or less identical to what it was when I was riding the Seven Axiom over the summer. I have not had a chance to go on a group ride yet, but will report on that once it happens. Acceleration feels effortless - that same "slingshot" feeling that, once experienced on a fast bike is hard to give up. The ride quality over bumps is better than I could have hoped for.
It is impossible to make a direct comparison between the Moser and the Seven, because the latter was two sizes too big for me. But for someone of my ability, the bikes feel as if they are in the same ballpark, or at least from the same planet. The revamped Moser is the first roadbike I've tried aside from the Seven that I can see myself riding and being satisfied with. On a critical note, Moser 2.0 is a bit squirrely starting from a stop and at very slow speeds. My bike handling skills are good enough at this point to not consider that a problem, but I wouldn't have felt comfortable riding it set up this way last year. Also, the bottom bracket is so low that with the 175mm cranks there is pedal strike unless I am very careful to keep the inside pedal raised on turns. Can't decide whether this means that replacing the cranks is a priority (trade, anyone?), or whether it is an opportunity to improve my technique.
Aside from this, there is the question of whether it is a good idea to ride a well used, retired racing frame with well-used, retired 10-year-old components and wheels if I mean to ride strenuously and possibly competitively. While the Moser frame is photogenic from a distance, it is in rough shape: scrapes on the tubes, missing paint, rust on the chrome. There is also a slight bulge at the rear of the headtube that, as I understand it, happened during the manufacturing process (the frame has been checked for integrity and shows no structural problems). If I decide that I like the bike and don't need a new one, it might still be wise to replace the components with less worn ones and have the frame repainted. Or start from scratch and get a framebuilder to replicate the geometry and tubing. It's hard to say, and for now I am just  excited by how great Moser 2.0 feels compared to almost every single new bike I have considered buying so far.
Knowing that some readers are interested in the outcome of this experiment, I want to note that I don't think it's as simple as buying any old vintage racing frame and putting modern components on it. But I do think I got lucky and ended up with something pretty cool that I would like to investigate further - with a big Thank You to all those who pushed me in this direction.
Labels: Italian bicycles Moser vintage