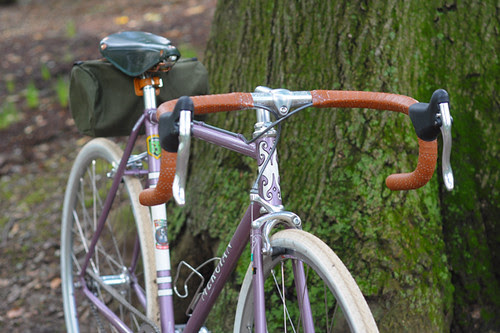 At this point some of you know that my new fixed gear bike is a Mercian. It was meant to be part of a "his and hers" pair, and I tried to postpone writing about it until the Co-Habitant's bike was set up. But it looks like that won't be happening for a bit, and hiding mine in the meantime felt wrong. So here is a less dramatic introduction that will hopefully still be informative for those curious about this legendary manufacturer. 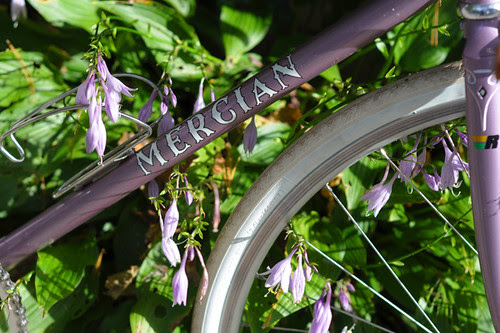 In the Fall of 2010 we began talking about getting the Co-Habitant a nice touring frame, and at the same time I started looking for a fixed gear frame for myself to replace my vintage conversion. After considering the kinds of bikes we wanted (lugged steel, comfortable, fast, fairly lightweight) Mercian was one option we gravitated towards. A small manufacturer in Derby, England, Mercian has been building custom frames since 1949. With pricing for a lugged steel frame made with Reynolds tubing starting at under $1,000, the value is hard to beat. And their waiting times were not absurd. I happened to know a handful of Mercian owners who were experienced cyclists and whose tastes I respected, and they all raved about the bikes - some being repeat customers. Finally, it appealed to us that Mercian Cycles are made in England, toward which we both feel some personal attachment. We considered other manufacturers and custom builders, but found that they were either unaffordable or did not offer quite what we wanted. After several months of research, contemplation and budgeting, we placed an order with Mercian in Winter 2011. 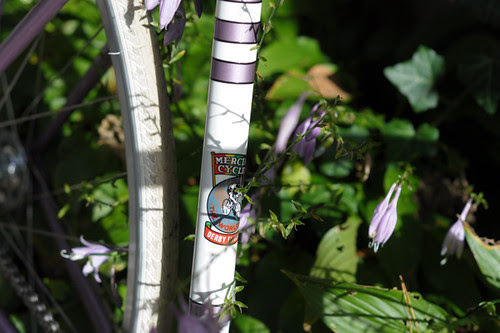 The way the order process works, is that they send you a form to fill out that is similar to their online framebuilder (warning: use at your own risk; has been known to result in frame purchase). You then submit it along with a deposit and get in the queue. When it comes time for the frame to be made, they confirm the specs and proceed. Afterwards the frame waits for paint (two tone liquid coat and lug lining are included in the price), and when everything is done you pay the remainder of your balance and the frame is shipped to you. When we were placing our order, it was estimated that the frames would be ready by summer. The actual time of completion ended up being in autumn. There was a small adventure with US Customs, but that was soon resolved and the frames arrived at our door in the end of September. 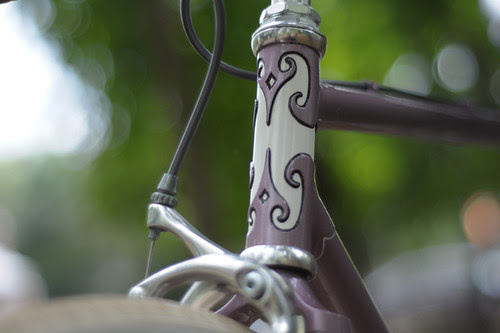 While allowing for custom geometry specifications, Mercian offers more than half a dozen lugged frame models, each in a choice of several different tubesets. From the beginning, we both knew that we wanted the Vincitore Special model, because of its distinct handmade lugwork. 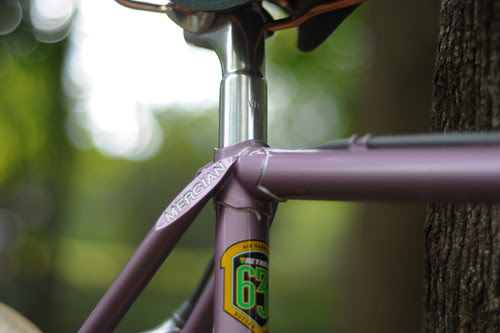 We were less sure about the tubing, but after speaking to several Mercian owners settled on the 631 - the modern version of Reynolds 531. 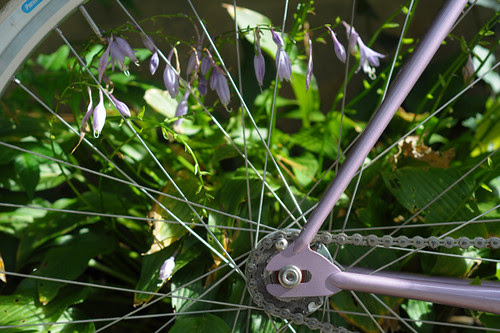 I wanted my bicycle to be a comfortable and versatile single speed/ fixed gear, not a track bike. So I asked for the "Sportive" (sports touring) geometry with track ends. This is an entirely normal request for Mercian, as almost any model can be built as a fixed gear - they just need to tweak it to make the bottom bracket higher. I also asked for braze-ons for fenders just in case I'd want to use them in future. 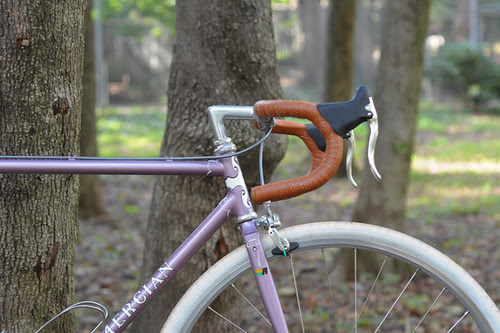 There was a myriad of other choices, such as threaded vs threadless steerer (threaded), maximum tire size (32mm), where to route the brake cable (braze-ons are along the top), how many bottle cage bosses (just 1), and whether to drill for brakes front and rear (yes to both). Aside from this, the only real custom thing I asked for was making sure there was no toe overlap - which caused them to make the top tube longer than they normally would on a frame this size. 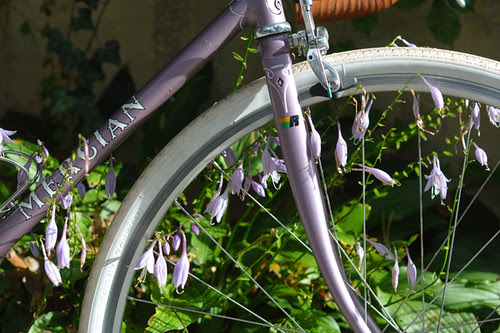 After agonising about the paint colour, I finally settled on a subdued lilac with white panels and white lug outlining. I wanted to make sure that the colour came out subtle, and not like a garish purple. I sent Mercian pictures with a description of what I wanted it to look like, and the result is pretty much spot on. 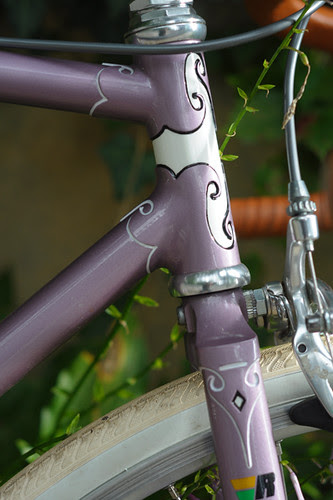 The one thing I would have done differently here, is not use black lining where the lugs meet the white head tube panel (black is so harsh, why not gold?) - but this is stylistically typical for Mercian and ultimately fine with me. Sadly, there is no space on the headtube for a headbadge emblem, due to my small frame size. Maybe later I can get a miniature one made. 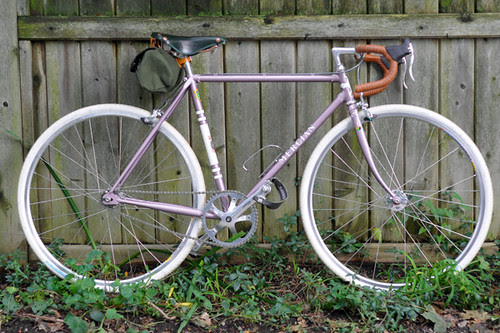 My frame came out as I specified. It fits me well and there is no toe overlap with the 28mm Panaracer Paselas (more like 30mm in actuality) that I now have it fitted with. But it's close, so if I install fenders in future, I will have to consider my tire and fender choice carefully. When I mentioned earlier that the Co-Habitant's frame is not ready, it is because the one he received did have overlap despite its large size and his request for no TCO. He has spoken with Mercian about it, and they have agreed to resolve it. Once his frame is ready and he wishes to review it, I will write more about his experience; until then I will stick to discussing my own bike. 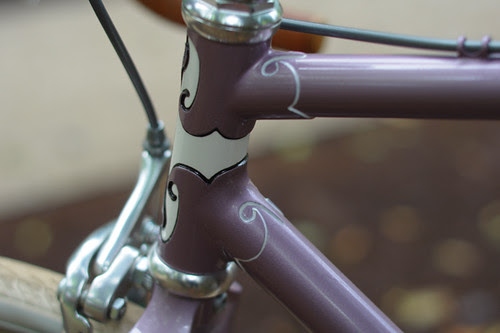 When it comes to construction, the main gist of my first impression is that the Mercian Vincitore frame is strikingly "different" from other currently made lugged frames I have seen. I don't mean the shape of the lugwork, but the craftsmanship itself. Different how... All right, the best way I can describe it is that it looks like a vintage frame in mint condition and not like a currently made lugged frame. In fact, every single (knowledgeable) person who's seen the bike in person so far was certain it was an older frame until I'd point out the Reynolds 631 decals. It's difficult to pinpoint what exactly creates the vintage impression, but it's everything from the finishing to the close-up look of the paint and outlining. Mercian's production methods for their classic frames have remained unchanged for decades, and that is probably what we are seeing. It's quite uncanny actually, and when we first received the frames we kept staring at them and running our fingers along the tubes and edges of the lugwork in disbelief. You really have to examine this bike next to, say, a Rivendell to see what I mean. 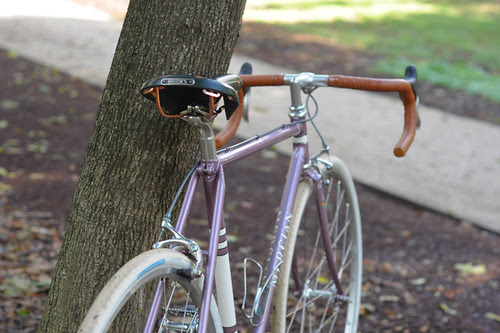 We built the bike up with a medley of mostly high-end, gently used components that I either already had or managed to get a good deal on. I am still not sure what's staying and what will ultimately be changed, so I will include the component list when I write a proper review at a later stage. 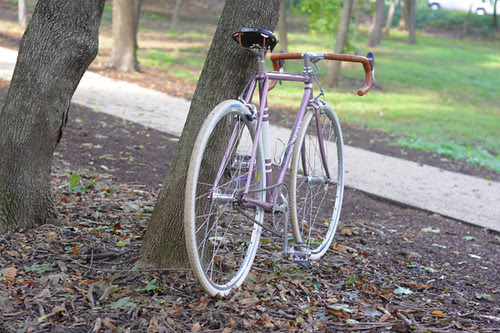 I have the bars about 2" below the saddle at the moment - which may ultimately be too extreme for me, but feels surprisingly okay for now. Initially the bike had 49x16 gearing due to the wheels and crankset I ended up with, but from the very beginning I intended to change it. After absorbing a great deal of advice, I decided to switch the rear cog to a 19t. The gearing now is quite low, and hopefully the spinning will keep me in shape during the colder season. 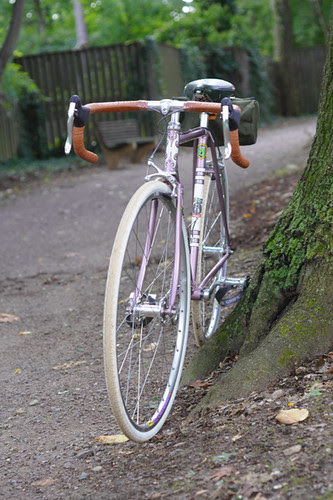 Having only ridden the Mercian a few times so far, it is much too early for anything resembling a review. But I can say a few things: The ride is not harsh at all - which was a top concern for me, as harshness causes me a great deal of pain. I also like the "feel" of the tubing, in the sense that it's just the right amount of flex for my taste. On the 20-30 mile rides I've taken so far, I've experienced less fatigue on this bike than on other fixed gear bicycles I've ridden, which may be related to both of the above points. One thing to be aware of, is that the 631 frame is not spectacularly "lightweight" by contemporary standards, and part of me now wonders whether I should have paid more and gotten lighter tubing. But would I get the same ride quality with the lighter tubing? In a fictional dream-world I would be able to try an identical bike with 725 or 853 tubing, then decide. Until then, if I am happy with how the bike feels, it seems silly to wonder about different tubing options. [Edited to add: We've weighed this bicycle and it's 22lb with the build shown, not including saddlebag.] 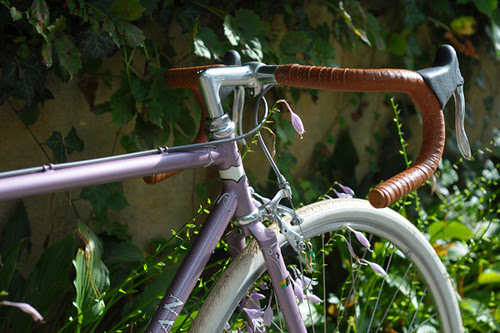 Well, that is all I have for now. Despite our early snowfall, I hope to have much more time with this bicycle before winter really hits. It is basically my roadbike for the rest of the year: With the shorter days, I no longer have time for long rides and for me a fixed gear is ideal for 20-30 mile jaunts. The bicycle is of course beautiful, and I am looking forward to getting to know it better. If you are looking for a traditionally made steel frame with custom geometry at a reasonable price, Mercian Cycles are worth exploring.
Labels: bicycle reviews fixed gear handmade mercian