'Lovely' Touring Bike, Given Away! 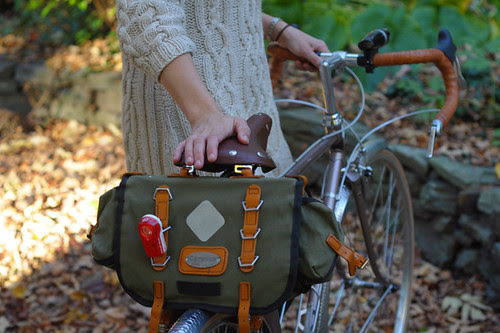 In case you did not catch the update on the original post and the subsequent twitter announcement, I selected the recipient for the Lovely Touring Bike give-away a couple of weeks ago. This give away has proven to be an especially difficult one, and I wanted to make sure the bike and the new owner were a good match before making the announcement here. Happily, it seems that they are. 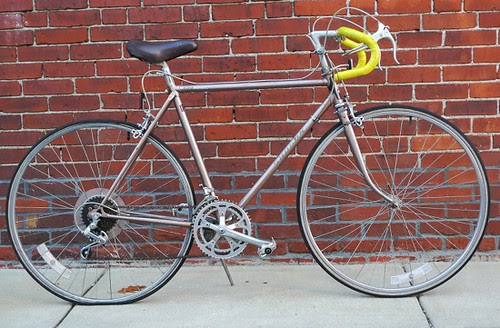 It was a year ago now that I spontaneously bought a beat up Shogun touring bike, because the geometry looked promising and I liked the colour. As I didn't need another vintage roadbike, I decided to turn it into a Lovely Bicycle project. It occurred to me that if refurbished with new components, it could make the perfect "starter" bike for a woman who does not otherwise feel confident on a roadbike. What makes the bike good for this purpose, is that it has fairly relaxed angles, stable handling, a comfortable feel over bumps, and no toe overlap. The combination of these characteristics is not easy to find, particularly with smaller sized frames. Upon a reader's suggestion I decided to try and solicit sponsors for refurbishing the bike and then give it away. There were glitches along the way with component choices and sponsorship commitments, and the project took longer than anticipated. But once finished, the bicycle came out wonderfully: 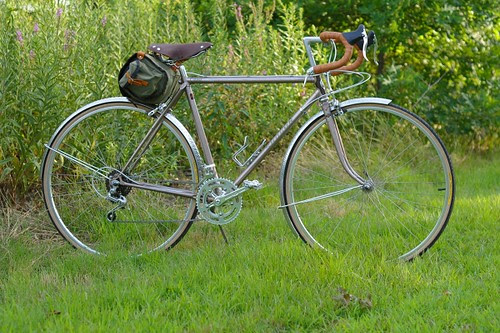 In the end, there were two main industry sponsors for this project: Velo Orange donated a headset, crankset, fenders, leather handlebar tape, and touring saddle - components that were specifically requested by me. Harris Cyclery assembled the bicycle and contributed spare parts. A number of readers (Justine, G.E., Neighbourtease, Spindizzy, Cedar, Somervillain) made crucial contributions to the build, including components, accessories and monetary donations, and I too made personal contributions. The total worth of the bicycle as shown is around $1,000 and most of the components are described in detail here and here. Granted, it is a large sum to spend on a vintage frame. But no equivalent bicycle exists today at that price point. 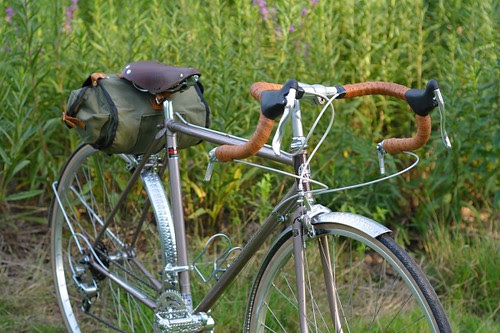 Because of the unique nature of this project, it was extremely important to me to give this bike to a person who I felt really understood what they'd be getting, and best stood to benefit from this bike's combination of characteristics. A lot of thought went into the component choices, with the goal of maximising comfort and minimising the aspects that normally make people uncomfortable and nervous when riding roadbikes. This was not meant for a roadcyclist who was simply unhappy with their current bike, but specifically for someone who had trouble handling roadbikes in the first place. No effort was made to make this bike "fast" by roadcycling standards, which pretty much made it unsuitable for anyone interested in that aspect of cycling. The way I saw it, the "lovely touring bike" would give the new owner an opportunity to travel long distances at their own pace, on a bicycle that was lighter, faster and better at handling hills than an upright city bike, with multiple hand positions afforded by the dropbars but without the intimidating "racy" qualities of typical roadbikes. 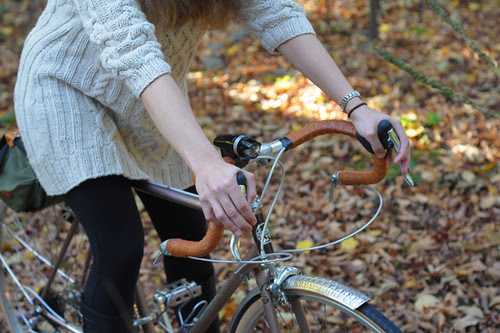 The give-away entry requirement was to submit a ride report, which would be included in a Lovely Bicycle compilation some time in the future. My criteria for selecting the recipient were that (1) they were the right height for the bicycle's 52cm frame size, (2) they submitted their own entry, and (3) what they wanted in a roadbike was compatible with what this bicycle could give them. I was somewhat overwhelmed to receive over 70 entries from around the country: I'd thought that the limitations of the sizing alone would yield a fairly small circle of applicants. But as I read through the entries, I was even more surprised how few of them seemed relevant to this particular bicycle. This is an issue I experienced with previous give-aways as well, but this time it was more acute than ever. The majority of the entries gave no explanation for why they wanted this particular bike, other than that it would be nice to win one. Others entered on behalf of their wives or girlfriends. Others still interpreted this bicycle as a more comfortable alternative to their modern racing bike. In the end, I received a grand total of four entries that I felt were truly relevant, and interestingly, two of them were local.
When I picked a name from the 4 finalists at random, I selected someone who was not only local, but had her own bicycle blog and was not a stranger to me... which made me worried that selecting her would be biased. So I nixed my selection, went back to the entries and re-read them, considering each entrant's circumstances more carefully... and kept coming back to the local blogger as the obvious choice. She had a fear of bicycles with drop bars after an accident some time ago, but really wanted to give them another try. She had been looking for a bicycle exactly like the one I was giving away, but not having much luck. She had an appreciation for vintage steel frames and knew what to expect from them. She was interested in comfort over speed. She was the ideal height for the bike. Finally, being local she could try the bike first and determine whether she would be able to ride it. And that is exactly what we did. 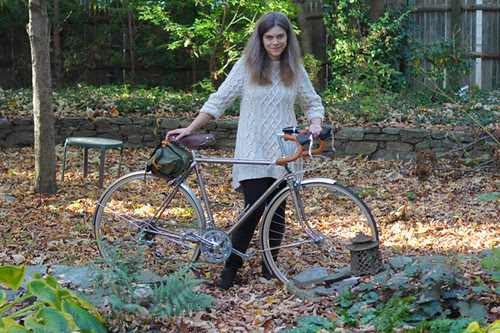 In short, please meet "cycler," the bicycle's new owner and the author of Biking in Heels. You may recognise her as the owner of "Gilbert" - a customised Raleigh Lady's Sports, which is her daily transportation bicycle. After much, much deliberation, I concluded that since nothing in this give-away indicated that local readers and other bloggers were ineligible to participate, it would be biased not to give the bicycle to cycler at this point, given how right they were for each other. After she tried the bike, this was confirmed; they are a perfect match and I wish them many happy rides together.
The "Lovely Touring Bike Give-Away" was an experiment that I enjoyed, but also found more difficult than any other give-away I have done so far. For a number of logistical reasons, repeating it is probably not feasible - though I suppose never say never.
There is also the huge collection of ride reports I've received from readers! Some submitted ride reports despite not entering the give-away, and I have over 100 total. I am thinking of making a compilation over the winter, and making it available in some sort of (free) e-zine format. One option I am considering is choosing a handful of my favourite ride reports and publishing them in full. Another option would be to play more of an editiorial role and publish excerpts from many reports according to themes. My thinking is not entirely clear on this yet, but it could be interesting. Or it could take forever. Suggestions?
With sincere thanks once again to all of my readers, to all of the "Lovely Touring Bike Give-Away" entrants, to the donors, and to the project sponsors Velo Orange and Harris Cyclery, wishing you all a wonderful weekend and happy cycling.
Labels: give-away vintage