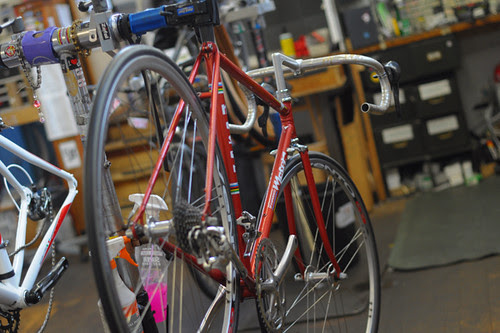 So I bought my Francesco Moser frame back from the person I sold it to, and built it up as a geared racing bike with modern components... despite having sworn off vintage roadbikes earlier. Yeah, I know. Allow me to provide some context:
I got this 1978 Moser racing frame in Vienna two summers ago, mailed it to myself in the US and built it up as a fixed gear. It rode nicely, but wasn't really suitable for fixed gear conversion with its low bottom bracket and resulting tendency toward pedal strike. Once I got my fixed gear-specific Mercian, I moved the components over and decided to sell the Moser. Building it up as a geared roadbike was not feasible: I would have had to spend a fortune on new wheels and components only to put them on an old steel frame, with no guarantee that I'd like the end result. It seemed wiser to buy a roadbike that I could test ride beforehand. 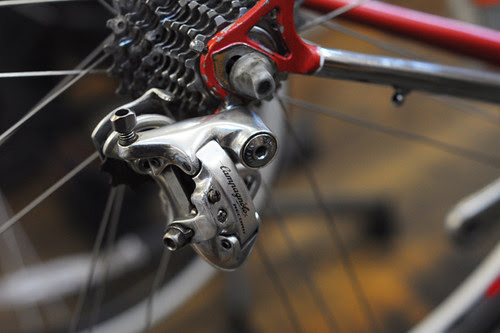 For what it's worth, I still believe that it is not financially practical for a "civilian" (i.e. a person who is neither a wrenching enthusiast with spare modern groupsets lying around, nor someone with bike industry connections), to take on a project like this. However, I have not really been a "civilian" for some time: I am interested in bikes not only for personal use, but also for the sake of learning and writing about them on Lovely Bicycle. And I do at this point have industry connections, as well as readers who are interested in making specific projects happen. All of these factors played a role here.
One of my readers offered to donate some of his used modern Campagnolo components and his old racing wheels if I were willing to experiment with a vintage racing frame. Around the same time, the person who bought the Moser from me built it up (with modern Shimano parts) and discovered that the bike felt too small for him. Luckily, I'd sold the frame locally. I saw this as a cue to buy it back. 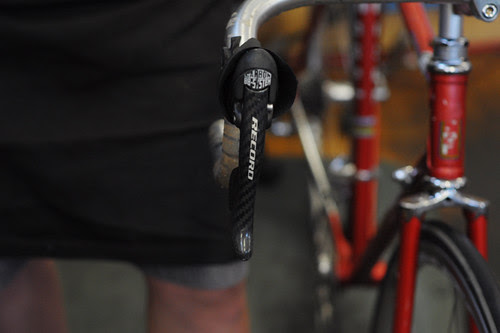 The second-hand components I received were a 9-speed Campagnolo Record drivertrain and levers circa (I believe) 1999 and a Campagnolo Vento wheelset of similar vintage. I already had the headset, stem, handlebars, tires and seatpost among my own spare parts. I bought a new bottom bracket, brake calipers, cable housing and bar tape at Harris Cyclery and they built up the bike for me.
The Moser is now finished, and I've ridden it - but not as extensively as I'd like before writing about it. I am also waiting to put some finishing touches on the bike before I take pictures. Not sure what I will do with this bicycle in the long run. The frame is 33 years old and was raced for years by the original owner. The drivetrain and wheelset are around 10 years old and well-used. Even if my impressions of the reborn bike are positive, I have concerns about frame/component failure and will need to think about that aspect more carefully. But it is certainly informative to compare this bicycle's handling to the modern roadbikes I have been trying over this past summer and fall. Let's just say I am surprised. 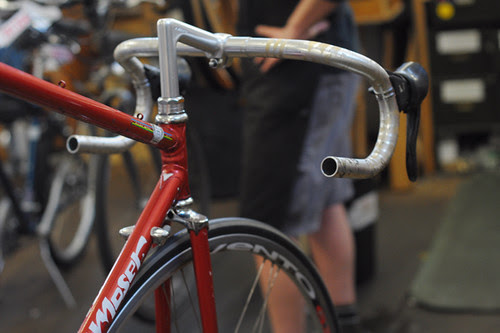 I am glad to have the Moser back; in a number of ways it is an even more unique bicycle than I thought. I hope to share my impressions in the coming week and fingers crossed that it doesn't start snowing in the meantime. Stay tuned, and a huge thank you to everyone who's helped me with this project!
Labels: DIY Italian bicycles Moser roadcycling vintage