Drivers are Not a Different Breed 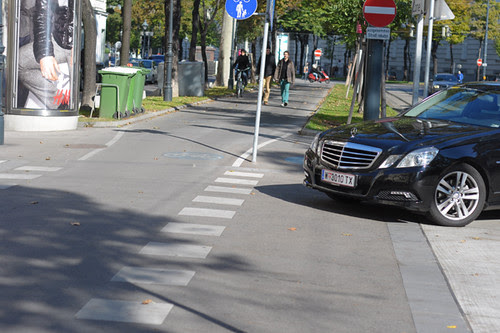 I have been reading some bicycle blog posts lately where the authors describe feeling betrayed when their non-cycling friends say something nasty about cyclists - you know, the kind of thing a clueless and self-entitled driver might say, but certainly not a friend who happens to be a driver. I mean, they're different, right? Those drivers who cut us off and shout at us are bad people, whereas our friends are good?

Problem is that this difference is fictional. After all, each of those nasty drivers is also someone's dear friend. As hard as it may be to believe, they are not usually "bad" outside the context of being behind the wheel. Likewise, just because someone is our friend does not mean they are incapable of thinking or doing things that would outrage us. We can disagree on issues and never know it until that issue comes up, and my experience has been that cycling is one of those issues - right up there with abortion. Once I began cycling for transportation, I learned fairly quickly not to discuss it with friends, co-workers or relatives who are non-cyclists unless I wanted these conversations to turn into heated debates, or all out fights.

Recently a friend and her husband were visiting Boston, and I met them for dinner at an outdoor cafe. I knew that they were both avid recreational cyclists, so I let my guard down and was speaking to them about bicycles - the pros and cons of different roadbikes, that sort of thing. I was feeling good that finally here was someone from my "real life" I could discuss bikes with. Then some cyclists rode down the street past us and the husband shook his head. "Those idiots are going to get themselves killed." I was confused. "What... Why?" He then explained how stupid it is when cyclists "think they are cars" and cycle "right on the road, without bike lanes or anything." "I hope you don't do that!" he added as my friend nodded. Turns out there is this huge national park where they live, and that is where they ride their bikes - unless it is an organised charity ride, which is the only time they'll go on the road. Not only are they drivers the rest of the time, but having exposure to cycling has done nothing to make them empathise with transportational cyclists. We could have spent the rest of our meal fighting, but instead I changed the subject - it wasn't worth it to me. After dinner they took a taxi to their hotel, and I walked around the corner to where my bike was locked up, then rode home "as if I were a car." Those drivers who hate cyclists could be anyone - our friends, our relatives, and even, apparently, other cyclists. People are people, ever ready to feel frustration and annoyance.
Labels: cars transport transportation options