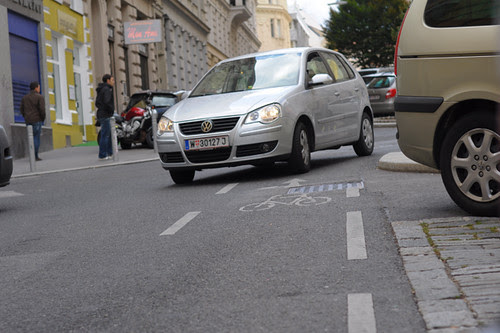 As many other cities with cycling infrastructure, Vienna is full of one way streets with bike lanes going against traffic. This is done to make travel more convenient for cyclist. The drawback is that it places cyclists and motor vehicles in situations where they can potentially collide with each other. One way this could happen is when the road is so narrow that a car cannot keep out of the bike lane entirely. Another potentially hazardous scenario is when vehicles emerge from around the corner, as shown here. 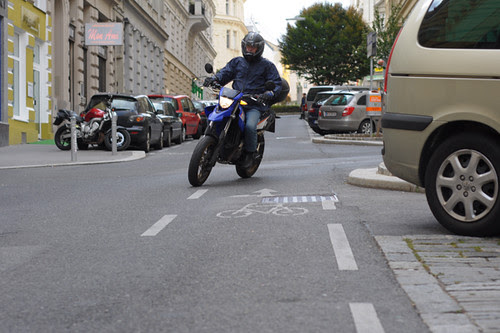 When I first saw the wrong way bike lanes, I was scared to ride on them. Surely it was only a matter of time before some car or motorcycle hit me head on? However, cyclists in Vienna use these lanes all the time, and as far as I know collisions are very rare. Eventually I got used to the design and began to trust it. 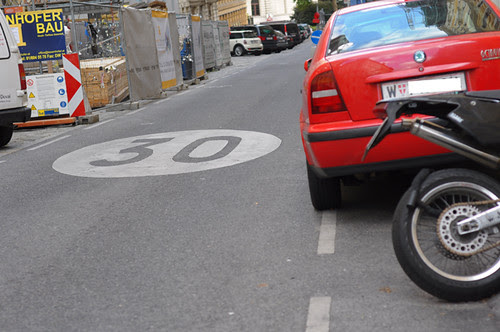 Drivers appear to be vigilant and in control of their vehicles; they can stop on a dime, and have for me. And no doubt the 30km/h (18.6mph) speed limit helps. The funny thing is that whenever I leave Vienna and remember the wrong-way bike lanes, their safety seems implausible. Only when I am here do I again believe that it's okay. What are your thoughts about this design?
Labels: urban cycling Vienna