It's been about 13 months since I started riding my Royal H. mixte, so I thought it about time for a one year retrospective review. Together with my initial review and the earlier posts on the topic, this completes the story of my first experience with ordering a custom frame. 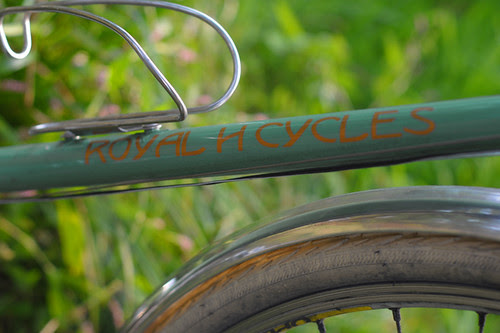 To summarise without repeating myself too much: This lugged steel mixte was built for me by Bryan Hollingsworth of Royal H. Cycles in 2009-2010. I described how I wanted the bicycle to look and feel, and he came up with the geometry and chose the lugwork and tubing. When the frame was done, the Co-Habitant and I built it up with components that we selected. For my initial review of the bicycle, please see here. A year later, my overall impression of it has remained largely unchanged. While in some respects I've become more critical of the bike after a year of use, I've also come to appreciate aspects of it that I had not even noticed initially. I will try to provide details on both counts. 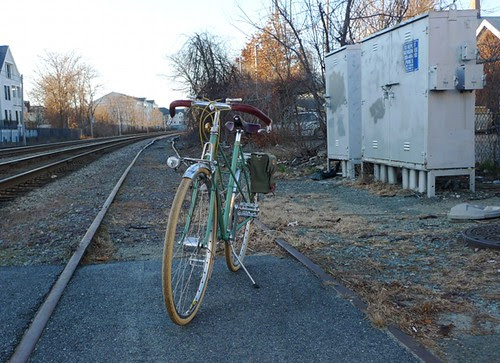 Use History
Given that I ordered the mixte when my bicycle obsession was only starting to blossom and I knew next to nothing about frame geometry, this could have been a disaster. For example: While initially I wanted the bike for "touring" - which in September of 2009 I imagined myself doing in a skirt and on a semi-upright bicycle - by the time the summer of 2010 rolled around I had begun cycling with dropbars and my concept of "touring" had changed. Luckily, another thing that happened around this time, was that we gave up our car and suddenly I had the need for a long distance transportation bike. Unlike touring, I prefer an upright posture for transportation and I have to be able to ride in work-clothes, which usually involve a skirt. Thus, the mixte became a transportation bike - for which it turned out to be well suited. 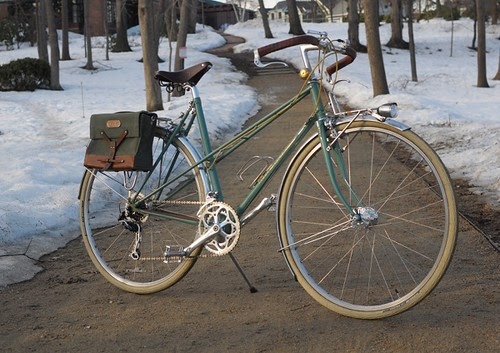 I rode the bike throughout Autumn 2010, then hung it up toward the end of December and mostly rode my IGH (internally geared hub) bikes over the winter months. 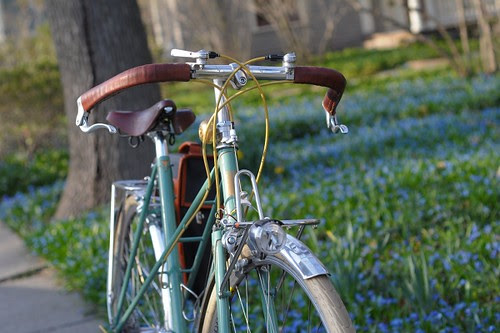 In April 2011 the mixte was retrieved again, and has been in regular use since. It is my go-to bike for transportation-oriented trips of over 10 miles, and increasingly I found myself using it for shorter trips around town as well. I never had a computer on this bike, so I cannot tell you how many miles are actually on it. 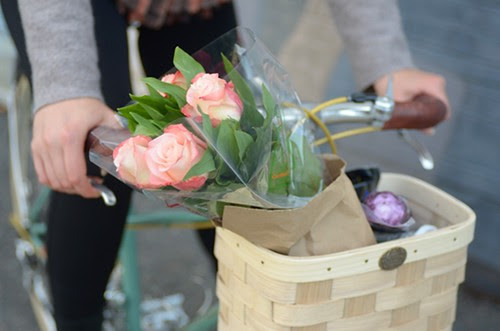 Typically I will ride the mixte with a pannier, and recently I have also attached a small front basket in which I will carry additional items. The mixte handles fine with a light load in the front (i.e. whatever will fit in the basket) and a medium load in the rear. 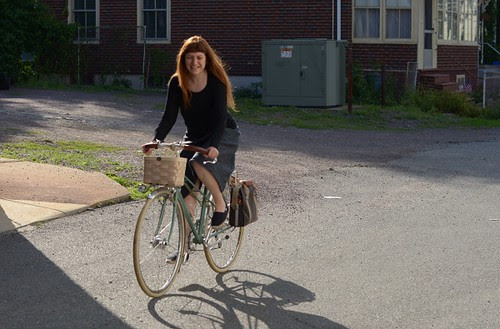 Ride Quality
When I first began riding this bicycle, I spoke a great deal about its unusual ride quality, which at the time seemed mysterious to me. While my impressions have remained unchanged, I now understand a little better what is causing them. Basically, the frame and fork are quite flexible - more so than any bike I had ridden before or since. I can feel the bicycle "give" when going over a bump and I can feel it rhythmically "move with me" when I pedal hard in a high gear. This, in combination with the 35mm tires, makes it very cushy over pothole-ridden roads and also reduces fatigue on long rides. At the same time, the frame has what I would describe as compact, aggressive roadbike geometry: steepish angles, shortish chainstays, short wheelbase, mid-high trail. This makes it an impressively maneuverable, precise and quick-responding bike. The combination of that and the flex is unusual, and not everyone's cup of tea. However, I like it - and the more I own the bike the more I've come to appreciate it. The maneuverability and responsiveness have proven useful in traffic situations, especially as my bike handling skills improve and I am increasingly able to take advantage of its roadish features. The flex is a great relief over city potholes and long-distance rides: I never feel tired or "beat up." The bike accelerates quickly and likes to be in a high gear when going long distance. It is also a very light, effortless climber and going uphill is no trouble at all. So essentially what I have here is a roadbike with upright handlebars and a mixte frame, made comfortable via a greater than usual degree of flex. 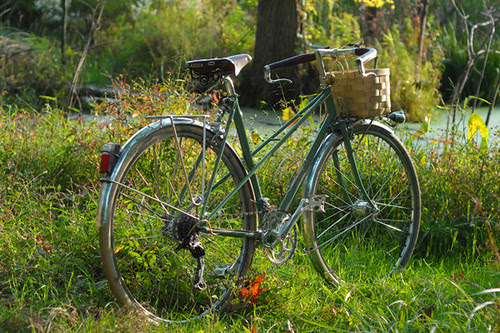 Likes and Dislikes
Most of all, I like the ride quality, the compactness, and the light weight (< 25lb) of this bicycle. It is not only a fun and comfortable ride, but easy to take in and out of the house and, when necessary, to carry. I like the bike's versatility: I can take it grocery shopping or I can ride it to a meeting 10 hilly miles away, and gun it if I am running late. I like the set-up Bryan used for routing the dynamo lighting: a couple of subtle braze-ons on the inside of the fork blade and voila: It's neat and invisible. I like the stainless steel kickstand touch-points in leu of a welded plate. In general, the builder did a great job with the placement of the braze-ons for racks, front derailleur and other things: Everything is in the right place; everything is clean and precise. I like the quality of the paintjob, done by Circle A: Not a single chip after a year of use, which has included droppng the bike into thorn bushes. As far as the build, I am happy with most of it - in particular the fenders, racks and LED dynamo lighting that make this a fully equipped bicycle, while also keeping it lightweight. 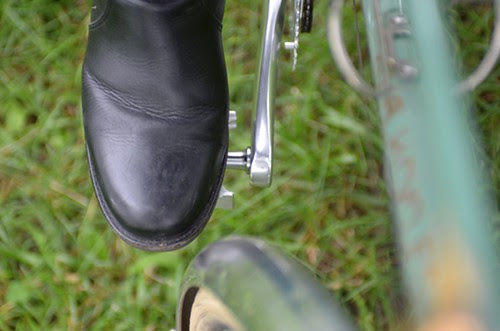 As far as dislikes, I really have only one: toe overlap, which this bike has a bit of. I don't think I mentioned it in my initial review, because I didn't notice it until I began using the bike frequently for transportation. I go through stages where I think that maybe it's okay or not even there, but then occasionally I experience it and it bothers me. We switched the cranks from 170mm to 165mm and that helped, but not entirely. We talked of the possibilities of a 650B conversion or a fork re-rake, but upon more careful examination that won't work. To eradicate the toe overlap entirely, I would need a new fork - which would then need to be painted to match the frame and the whole thing would be a hassle. Not sure what to do yet; maybe a winter project.

There are other things that at some point I questioned, but have since decided are good. For example, while my initial impression was that the chainstays were too short (to carry standard sized panniers without heel strike), I have since found a number of panniers that work (see: Philosophy, Po Campo, Cristobal), so this no longer bothers me. The short chainstays contribute to the bike's compactness and spirited handling, so as long as they allow me to carry stuff I am happy. 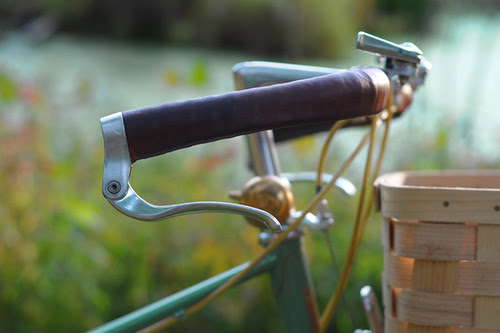 Another thing - and this has nothing to do with the frame - is that I am rethinking the handlebar setup, just because I feel like a change. Not sure what I'll do yet, but in Spring 2012 you might see something different in place of the Porteur bars and inverse levers. 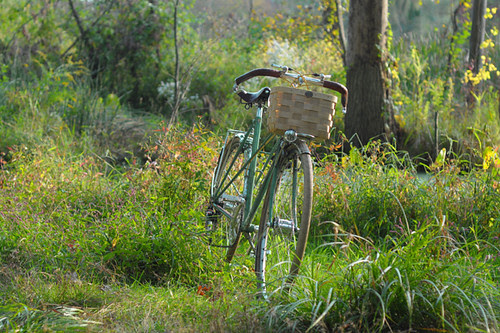 If I were doing this all over...
If I were ordering this mixte now instead of two years ago (wow has it really been two years?..), I would want to design it from scratch: specify the geometry, pick out the tubing, choose the lugset - basically what I did for the Randonneuring bike, only for myself. I would go one of two routes: Either keep the geometry exactly as it is on my current mixte, except ask for a longer virtual top tube, or I would make it a 650B low-trail bike, based on a pre-1950s porteur mixte design (I have a specific bicycle in mind whose measurements I want to replicate). Of course ideally, I would ask Bryan to make one of each and then test and compare them here - but for that I would need a lavish "Lovely Bicycle scientific studies" budget!

My motivation behind ordering a custom frame was atypical, in that it wasn't just for the sake of having a bicycle. From the very beginning I looked upon it as a learning experience in bicycle design. I wanted to understand how these things were done. Talking to Bryan about his process and being allowed to watch him work gave me my first inside look into the world of framebuilding. Two years later, my interest in it is only growing stronger. I am excited about bicycle design and looking forward to trying out more ideas. Thank you for following along!
Labels: bicycle reviews Constance mixte Royal H Royal H. Mixte