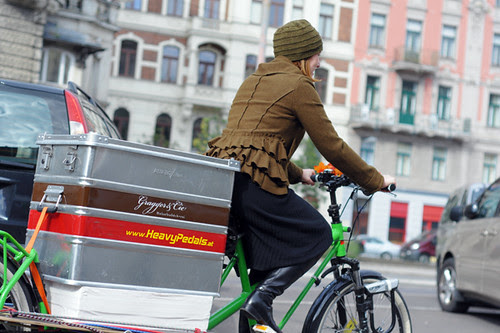 Finally, a cargo bike I can comfortably ride. A proper, enormous, heavy cargo bike. In the past I've described finding this genre of bicycles challenging to handle, and some of you have suggested that I might find a longtail easier than a front-load system. You were right! But this is not your typical longtail. 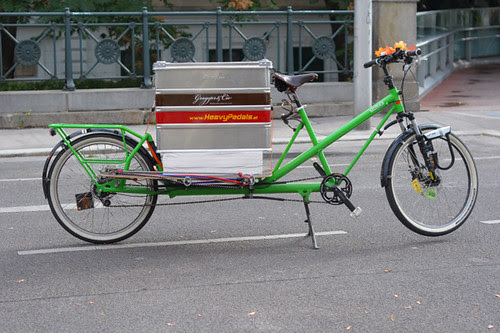 The idea of the MSC Truck is similar to that of a box bike or "long john," except that the loading platform is in the rear. Designed by my friend Wolfgang Hoefler for his delivery company Heavy Pedals (in Vienna, Austria), the bike is manufactured by the Viennese Maderna Cycle Systems. 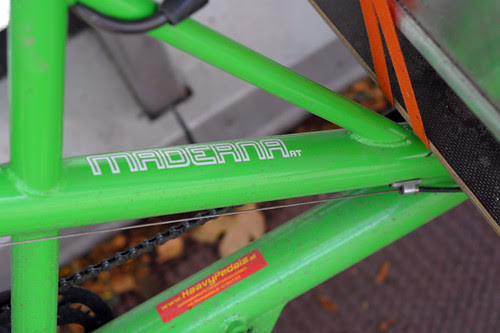 The mixte-esque frames are made of oversized steel tubing and is manufactured in Europe (Austria and Poland, as far as I understand). 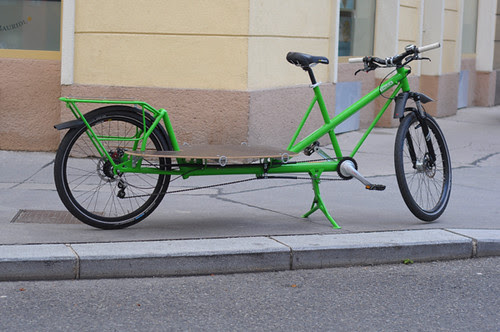 The bike pictured with the aluminum box is Wolfgang's personal version with various customisations, and above is what the production version looks like with the platform empty. The wheelbase is 200cm and the total length is 265cm. The weight as pictured is 28kg (62lb). The wheels are 26". The rear rack is integrated with the frame, and the rack's tubing will fit many pannier systems including Ortlieb. The bike comes standard with a suspension fork, disk brakes, heavy duty kickstand, plastic fenders, padded vinyl saddle, and straight handlebars. There are several different gearing options, including derailleur and internally geared hub. Dynamo lighting is available as an option as well. 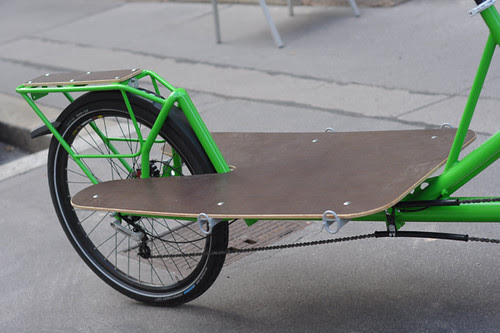 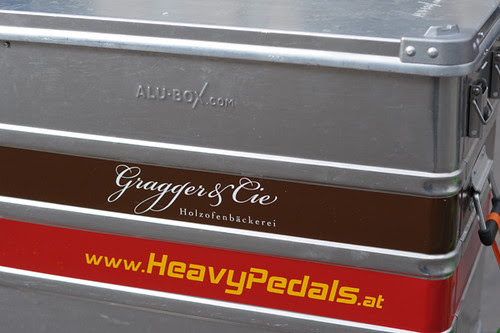 The platform can house a variety of containers. Heavy Pedals prefer to use the customisable Alu-boxes. But it can also be fitted with a more traditional cargo box, or child seats. Personally I would love an option where slatted sides could be added to the platform so that it becomes a container in of itself. 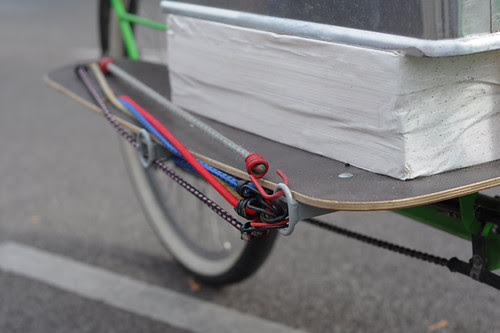 There are provisions for bungee cord attachments. 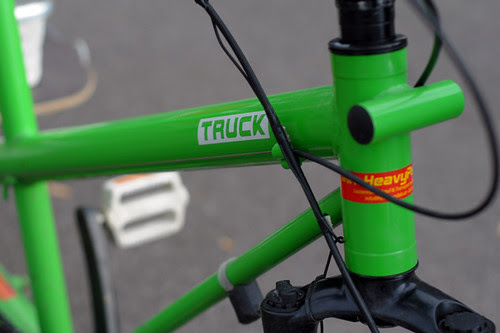 The front of the bike has a dock to which you could also attach a front rack. Overall the Truck is rated to transport 150kg (331lb) of weight, not counting the cyclist. 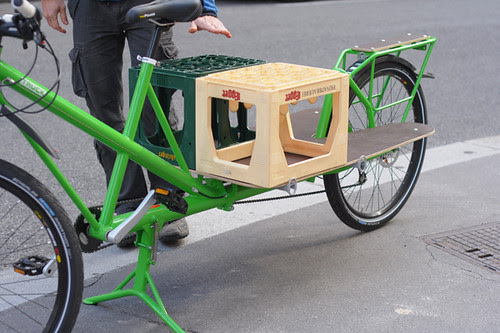 The height of the rack coincides with the height of a typical crate, making it possible to turn the rear into a larger platform still for oversized objects. 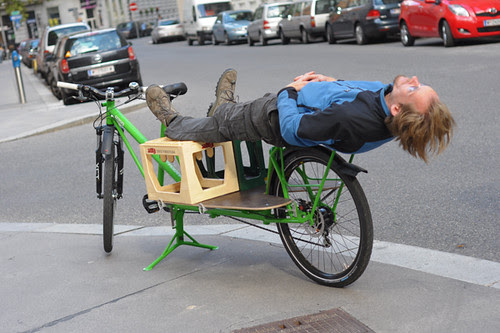 When parked, the bike is very sturdy on its double-legged kickstand; there is no wobble. 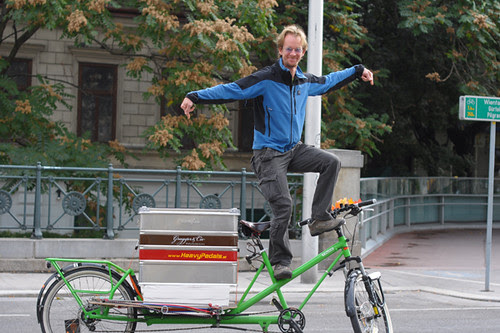 Very sturdy indeed! As I discovered when handling the Truck, there is no need to lift it either to engage or pull up the kickstand - it works via tapping it with your foot and then rolling the bike either forward or back. Even a person of very slight stature can handle it. 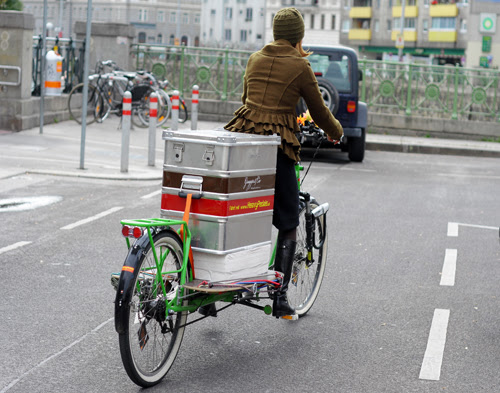 I was reluctant to try riding the Truck, because I did not want to overturn Wolfgang's cargo and chip his paint by crashing it. But he knows my riding style (having taught me to ride a brakeless track bike safely last summer), and assured me I'd be able to ride it. It would feel just like a regular bike, he promised. And there is no dramatic story coming, because it did. Balancing it felt the same as with a regular bike - no twitchiness when starting and braking as I had experienced with front-load bikes. It wasn't especially difficult to maneuver around the very cramped space you see me riding in. I could sense that I had a long tail, but it was intuitive what to do about it. I can't really explain it any better, other than to describe the handling as unremarkable - which, when it comes to cargo bikes, is a compliment. Though I did not ride it through the city, I would feel comfortable trying. According to Wolfgang, the handling is not any different when the platform is empty vs heavily loaded; the only difference is that it's more difficult to go uphill with the extra weight. Typical speed of a moderately loaded Truck is 20 km/h (12.5mph), though it is capable of going over 30 km/h (18.6mph) if the rider prefers to travel faster. The speed depends on the gearing you chose as well. 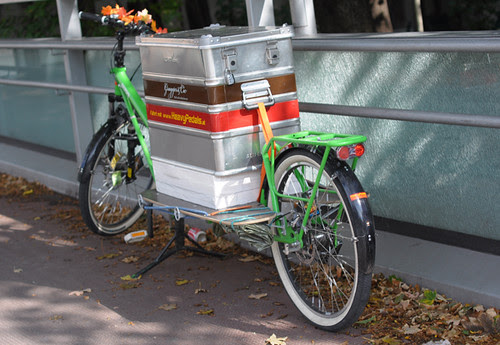 In addition to the fine handling, the Truck was easy to mount and dismount in a skirt thanks to the unisex frame. The adjustable saddle height (via quick-release) was convenient as well. The bike remained stable when I was walking it. A good design all around, it seems to me. It is not as "cute" as a traditional cargo bike and I am not a fan of the colour, but I have no complaints regarding its functionality. In fact, I am wondering what the benefit of a front-loading cargo bike is, if the same weight can be transported via a longtail system without impacting handling - particularly since stuff can be piled higher in the rear, where it will not block the cyclist's field of vision. This is not so much a criticism of front-load bikes, as a genuine question: What accounts for the fact that traditional makers have favoured the front-load system?
Heavy Pedals is a delivery service and cargo bike shop in one, and they stock all sorts of delivery cycles from different manufacturers - including long johns, bakfietsen and cargo trikes. But the MSC Truck is the one I'd be most comfortable riding on the streets at this stage, given my brief experience with the other styles. Local pricing for the Truck starts at €1999- and there is not currently a North American distributor.
Labels: bicycle reviews bike friends cargo bikes test rides Vienna