Have Bike, Will Travel? 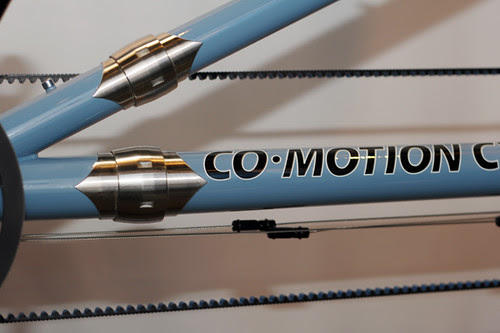 Earlier, I mentioned the popularity of folding bikes at Interbike - a trend that can be attributed to the rise of multimodal urban transport. But a related trend was evident as well: full sized bicycles that disassemble for travel. It seemed like every other booth featured at least one model with couplers - a method of construction that allows for the frame to be taken apart and fit into a standard sized suitcase. The separated parts of the tubes screw into the (usually stainless steel) couplers to form a complete frame, and the brake and shifter cables can be similarly separated using cable splitters. Couplers can be installed on all sorts of bicycles, lugged or welded, with thick or thin tubing - including enormous tandem frames such as this Co-Motion. Visually, I think they look best on stainless steel or silver frames - otherwise they interrupt the continuity of the tubing - though others may not agree (Royal H. has managed to pull these off on a small and elaborately lugged frame without making it overly busy). 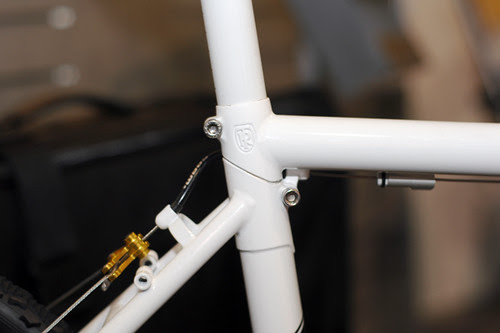 An alternative method to coupling is the Ritchey break-away system - which I'd heard a lot about, but only now saw in person for the first time.  I am not sure exactly how it works in comparison to couplers, but the connecting points are at the seat cluster and on the downtube near the bottom bracket, which has the benefit of making them seamlessly integrated with the frame.
The idea of taking bicycles apart for travel is certainly not new. While it is not clear who came up with the concept originally and when, I know that disassembleable military bicycles from a number of manufacturers were used during World War II. And Rene Herse offered demountable models for personal use in the 1950s.
Today, the surge in popularity of such bicycles can be traced to the increasing complexity and expense of air travel. Until 2005 or so, many domestic and international airlines allowed full size bicycle boxes to be checked in as luggage for free, or at a minimal cost. Today some airlines do not permit bicycles at all, while those that do charge fees upward of $200 each way. For a couple of years, the ability to disassemble a bicycle and fit it into a standard suitcase allowed the cyclist to avoid this by simply checking in the bike as a regular piece of luggage. However, as of 2010 things have gotten even worse: Most international airlines no longer allow two pieces of luggage per person as before, but limit the amount to one. So even with a disassembleable bicycle, a traveler would have to either check in the suitcase containing it as their sole piece of luggage, or pay an extra fee for checking in two suitcases. As far as I know, no full-size disassembleable bicycle will fit into the overhead compartment of an airplane as carry-on luggage, due to the wheel size.
Even luggage restrictions aside, there is the very real possibility of a disassembled bicycle being damaged as part of a careless security search, for one thing. And then there is the question of the traveler being sufficiently competent to assemble the bicycle upon arrival - as failure to do this properly can result in safety issues. All things considered, is it worth it? As someone who travels fairly frequently, I am not sure whether a disassembleable bicycle would be more of a help or a burden. For the traveling cyclists out there - what are your thoughts?
Labels: Interbike travel