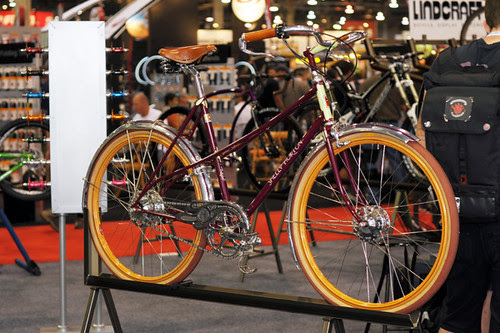 Some say that Interbike and NAHBS (the North American Handmade Bicycle Show) have begun to overlap in the past couple of years, and that was certainly my impression last week. I saw lots of handbuilt bicycles at the show - some familiar, and others by builders whose work I had never seen in person before, which was pretty exciting. But the funny thing was that most of them were being used to display components and accessories, rather than shown off in their own right. I admired an unusual bike by Signal Cycles, only to learn that its purpose was to demonstrate a motorised lift. I examined an unfinished frame, and was grimly told it was used to demo polishing tools. Nonetheless, as a lover of handmade bicycles I took the opportunity to photograph the ones on display and would like to share my favourites. 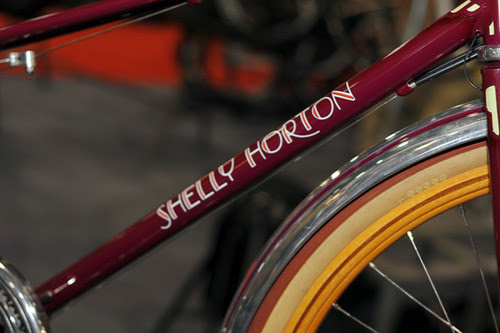 I could not believe my good fortune when I spotted the Shelly Horton mixte by Bilenky Cycles. Made for a collector, this mixte has an interesting story. 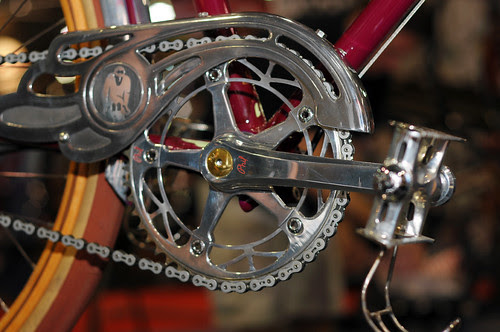 The mixte was part of a Phil Wood display, featuring their stunning custom crankset, bottom bracket, hub shells (housing Rohloff guts in the rear and Schmidt dyno up front), cogs, toe cages, etc. - all made as one-offs especially for this bicycle. 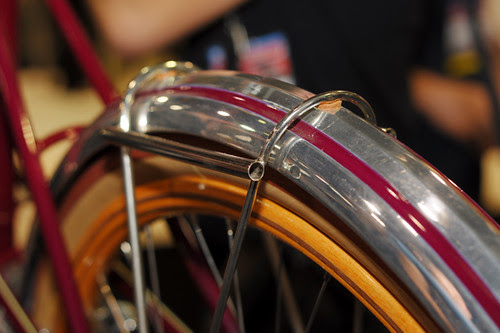 The custom Italian wheel rims feature actual wooden inlays. Pretty much every part of this bicycle is a one of a kind. 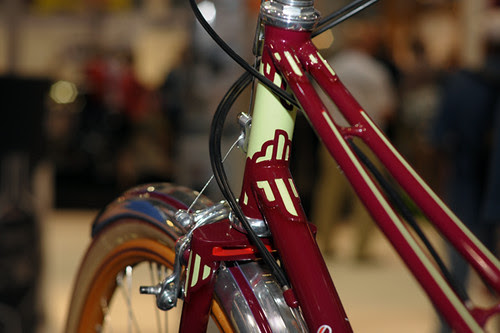 And then, of course, there is the art-deco inspired lugwork. 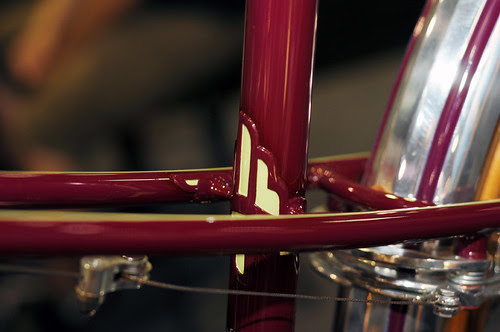 Though I would not choose this colour scheme for myself, it works well to set off the intricate lugs. 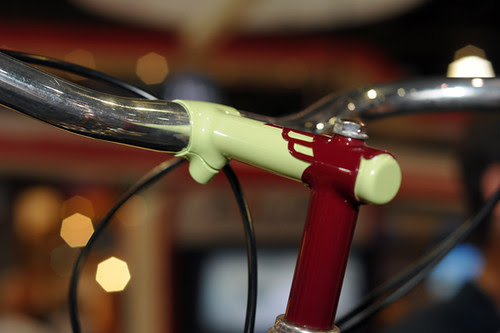 Custom stem, lugged and painted to match the frame. 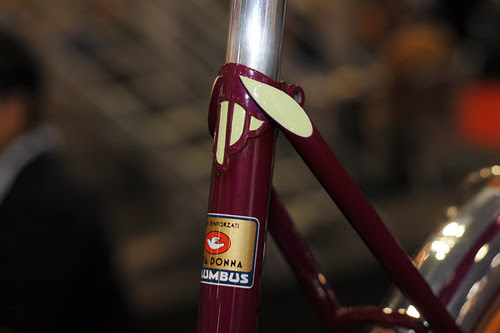 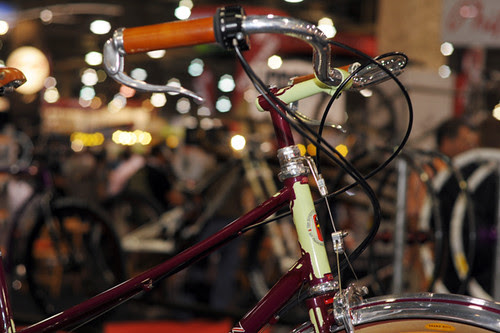 What do you think, would you ride this bike to the grocery store? Having read all about the Shelly Horton mixte, but never expecting to see it in person, finding it at Interbike was a wonderful surprise.

But now for something completely different, allow me to introduce "the pencil bike." 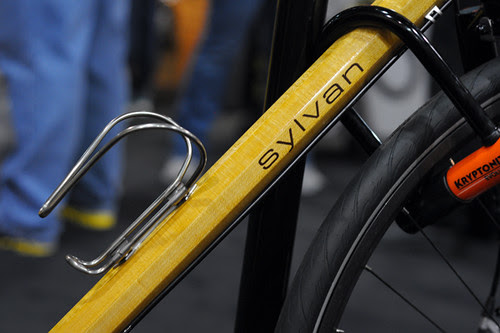 On display at the Kryptonite booth, this is a lugged wooden bicycle made by Sylvan Cycles. I cannot help but think of it as "the pencil bike," because - well, the faceted wooden tubes resemble pencils. It's a good thing; I think the bicycle looks friendly and approachable. 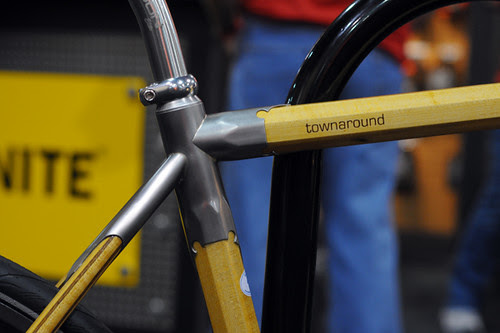 The Townaround is their hub-geared city bike model with upright handlebars. 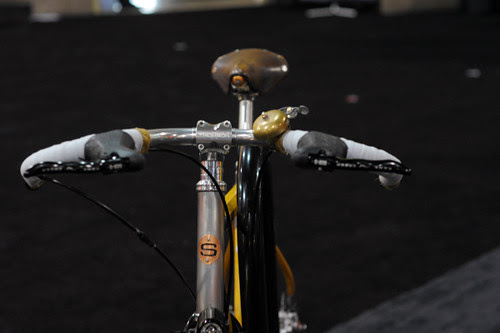 Having briefly written about Sylvan Cycles earlier, it was a real treat to see one in person. It looks great and I understand the frames are very durable: One of their bikes was apparently ridden in the D2R2! 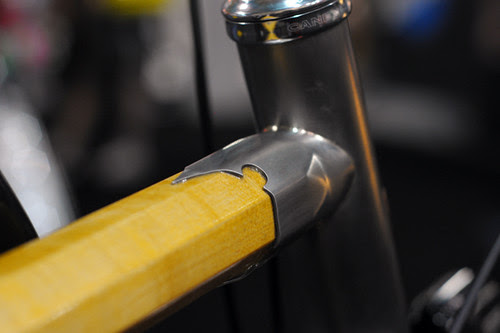 Close-up of the stainless lug sleeves. The tubes are maple. 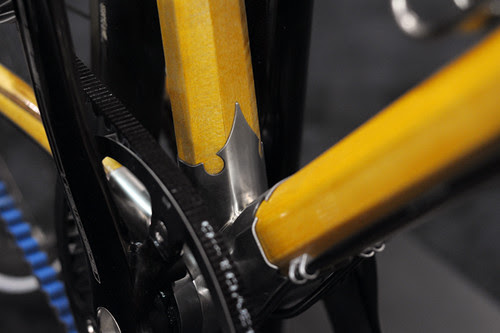 One of the interesting things about this model is that it is a belt drive, which I would love to try in of itself. 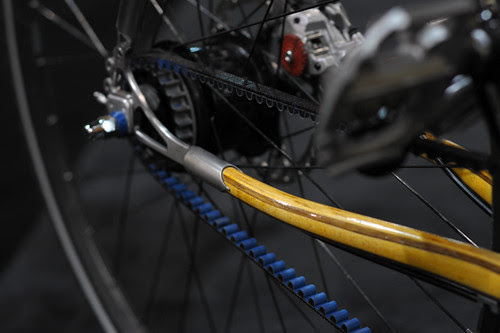 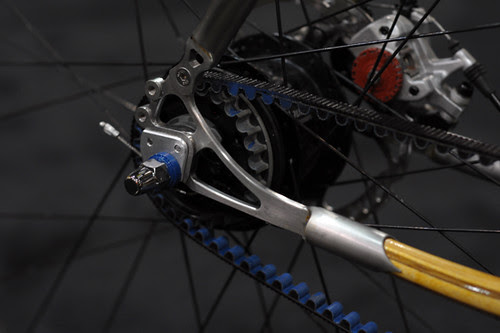 And the socketed drop-outs are just beautiful as well. 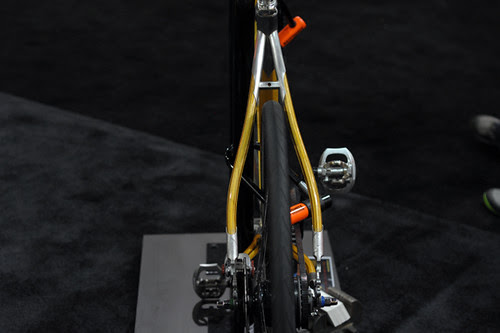 Will it fit fenders? 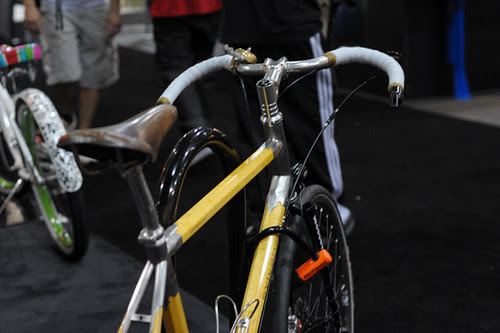 From the faceted maple frame to the belt drivetrain, the Igleheart fork and the handlebar setup, I like everything about the way this bicycle is built up. Maybe some day a shop in Boston will carry a demo model. And I would love to see people riding them on the streets. 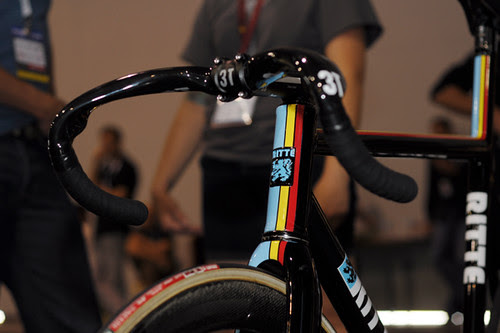 Finally, I would like to tell you about this bicycle at the Ritte booth. It is a handbuilt trackbike by framebuilder Megan Dean (Moth Attack!), and she made it for her boyfriend, Jack Lindquist. 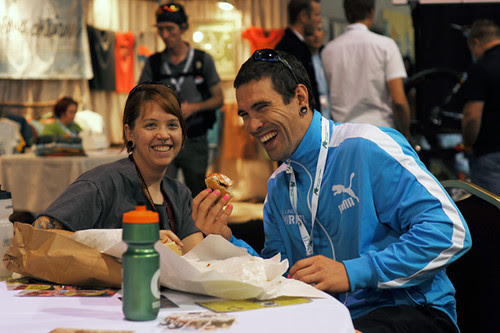 Megan and Jack are from LA and I met them at Cross Vegas the previous night (yes, I went to a cyclocross race!), where they were introduced to me as a framebuilder and a track racer. They are both so modest and low-key, that I was imagining something small scale (to be fair, half the cyclists I meet in Boston either race or build frames at least on occasion). In fact, Jack is a sprinter for Ritte Racing and Megan builds bicycles that crowds gather around in worshipful swarms. 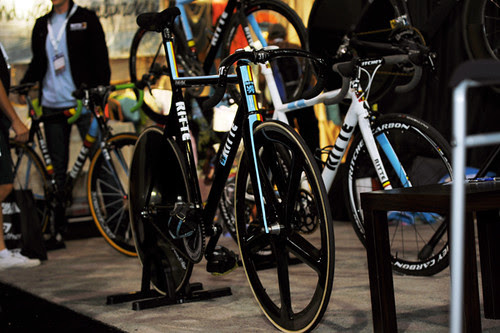 I mean jeez. When I heard that "Megan's frame is in the show, you should see it!" this was not what I pictured. This thing gave out a glow and energy that rendered spectators speechless. There were so many people gathered around the bicycle that getting a clear shot was almost impossible, but I didn't want to drag it away from the appreciative audience. 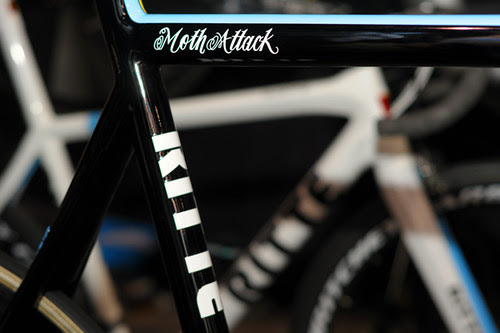 The frame is fillet-brazed steel, with a carbon fork. The joints are so smooth, they look liquid. 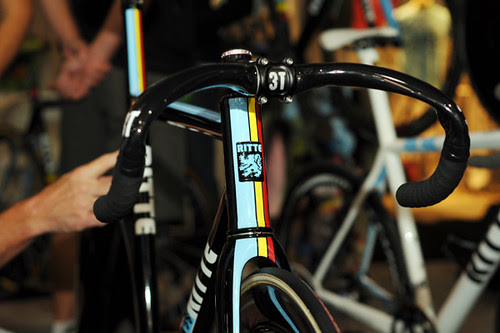 The process of making frames with tubing and angles like these is completely alien to me, and I had a hard time wrapping my mind around the fact that this was built by hand - especially since everything looks so flawless. 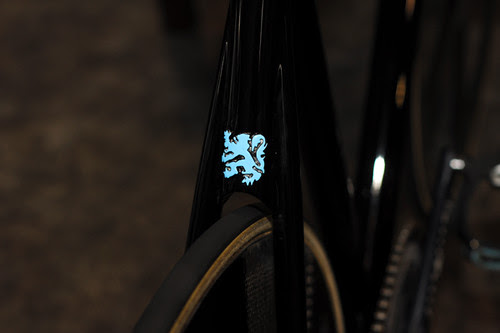 According to Megan, the frame was not difficult to build overall, except for the tricky seat stay attachment. 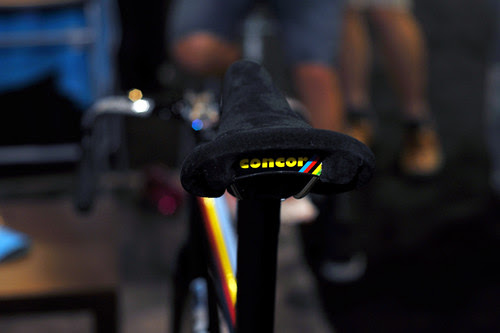 Not difficult! My hat's off to you, Megan. 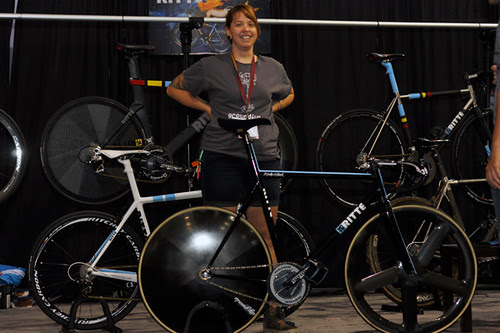 Although Interbike was not about handbuilt bicycles, the ones on display undoubtedly stood out against the backdrop of mass produced wares, and I felt it only right to honor them. Handbuilt bicycles inform industry trends down the line, and the influence of custom randonneurs, mixtes, and other unique creations exhbited at NAHBS earlier could be readily observed in booth after booth at Interbike. Should we expect a line of "pencil bikes" from one of the big manufacturers in the near future? Time will tell.
Labels: bike shows framebuilding Geekhouse handmade Interbike mixte