Side Street or Main Street? 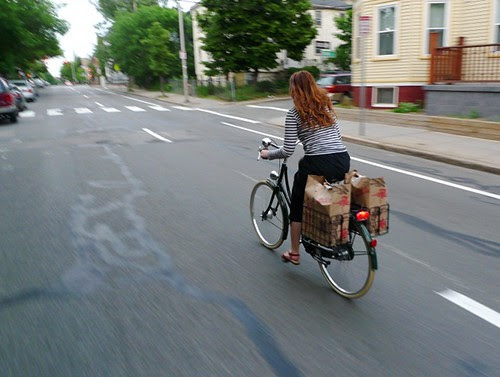 Cycling in greater Boston, I alternate between routes that take me along busy roads and routes that take me through quiet side streets. Each option leaves something to be desired. The busy roads are, well, busy - lots of car traffic, lots of action, lots of chaos. But they do seem to have enough room for everyone, including the processions of cyclists that now travel along them more than ever. The side streets are much quieter and greener, but are often too narrow to fit both a car and a bike side by side - resulting in its own set of challenges.
I've mentioned before that when I have close calls or memorably negative encounters with cars, it almost always seems to happen on a side street. But the same is definitely not true for everyone, and a recent post on Let's Go Ride a Bike illustrates why many urban cyclists tend to keep away from busy roads. So I keep wondering what it is that, over time, has made me weary of side streets, whereas others see them as a refuge.
One possibility is that I tend to overcompensate for the danger factor of main streets by being extra-vigilant, extra-focused and extra-careful as a matter of course - expecting the worst from every vehicle out there, and cycling in a way that anticipates that. On the other hand, side-streets lull me into a state of relaxation, because they seem so tranquil and friendly - so when something bad is about happen, I don't see it coming and am less likely to avoid it.
But this factor aside, I also think that drivers are less likely to keep their aggression in check when there are fewer witnesses. On side streets there aren't many people around, and perhaps the drivers with whom I've had confrontations and close calls were well aware of that. A scary thought, to be sure.
What is your take on main streets versus side streets, and what is your preference?
Labels: traffic transport transportation options urban cycling