A Ride with Irene

And so we have weathered the storm. Here in Boston, the general attitude toward Hurricane/ Tropical Storm Irene has mostly been one of sarcasm. Sure, there was some anxiety - stocking up on water and that sort of thing. But for the most part it's been a collective rolling of the eyes, a general feeling that the whole thing was unnecessarily hyped up by the media. One local establishment posted a handwritten sign stating "Closed tomawrah due to wicked bad hurricane!" Other businesses ranted against the public transit system for shutting down - drafting "Closed for the Day Thanks to MBTA" signs explaining that their employees have no way of getting to work - but that otherwise they would have happily remained open. 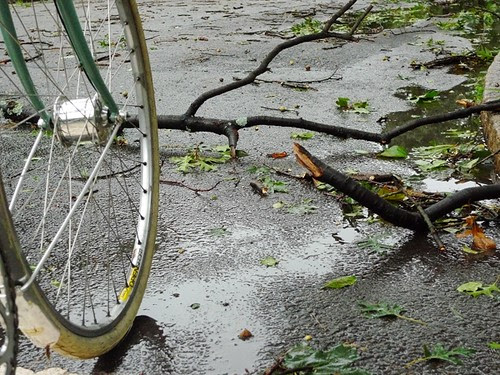 My own feeling was that the hurricane/ storm was not so much intentionally overhyped, as unpredictable - and there was a conscious decision to err on the side of caution. I also felt that it was insensitive of some to make light of a potentially destructive phenomenon just because it did not cause havoc in their neighbourhood. We live on the border of Somerville and Cambridge, MA, where the storm felt mild - but it did damage even here. Around mid-day Saturday, a large tree toppled over onto a major road around the corner from us, knocking out power lines and blocking part of the street until the city cleared it away. Had anyone been walking, cycling or driving on that side of the street at that exact moment, they could very well have been killed. 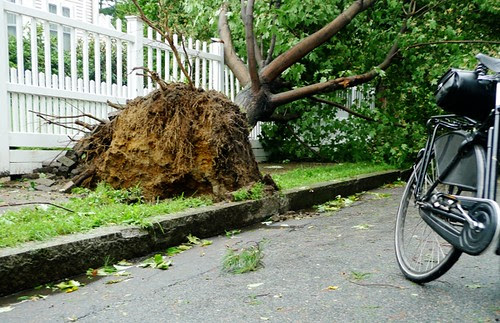 Today we carefully cycled around the neighbourhood and discovered more trees uprooted and large branches strewn across side streets. The strange thing is that the wind did not feel all that strong even during the worst of it, so we were surprised to see some fairly large trees knocked over. Does this mean they had shallow root systems? 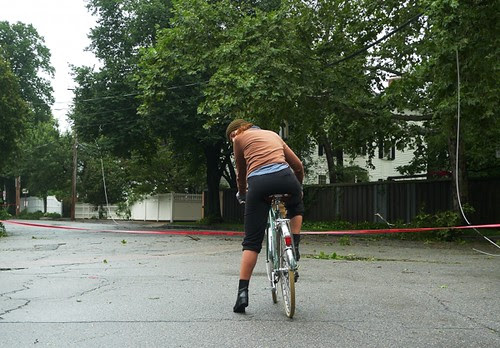 Powerlines were downed in quite a few places, too. One local coffee shop that decided to stay open lost power on Sunday afternoon, yet remained operational for as long as some pre-brewed coffee remained. Customers would come in and sit with their drinks and pastries in the dark - quite happily, since this was one of the very few places open. 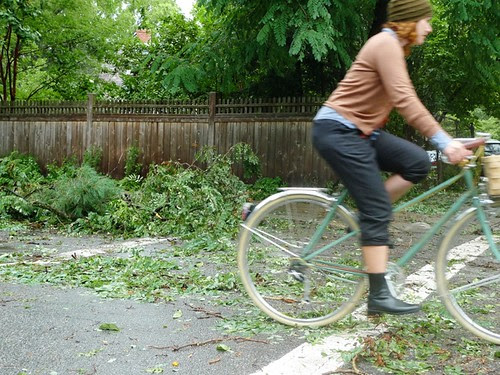 Surveying the damage in our neighbourhood, I think that the calls for caution were justified, even if the storm did not reach hurricane level. Overwhelmingly, motorists chose to stay off the roads here and the streets have been mostly empty - which I am certain accounts for the lack of injuries and casualties, considering the fallen trees and dangling powerlines. Cap'n Transit wrote a post a couple of days ago about the connection between driving and hurricane deaths that is worth reading.

I hope that all my East Coast readers are doing well, and that the storm has not been too severe for you. Has anyone been cycling?
Labels: Boston mixte rain