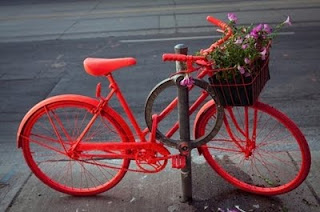 [image via The Good Bike Project]
Once upon a time I was enrolled in art school and we had this visiting professor - a new media guy - whose sulky catchphrase was "painting always wins." By this he meant that painting, being the traditional form of artistic expression, enjoys an unfair advantage over less conventional art forms in that it is more readily accepted as "art" by the general public - even if it is not. Those students who were not painters nodded sagely every time he said this, whispering "patriarchal" and "privileged" while throwing scornful sideways glances at their painterly peers. Whereas those students who were painters shrugged dismissively: "Well of course he's going to say that; he's a new media guy who hates painters." Naturally, both groups were right, but this is the sort of debate that is taken very seriously in art schools. I hadn't thought about Professor Sulky New Media Guy in some time - until I came across a link to this article on TreeHugger.

My understanding of the story is like this: A woman in Toronto decided to decorate a bicycle that was abandoned, locked up to a bike rack. She painted it neon orange and placed potted flowers in the basket. The city of Toronto then ticketed the bicycle, indicating that it was tagged for removal as a result of being abandoned and now clearly unridable. The woman and her friends decided to protest this and formed a collective, seeking out other abandoned bicycles and painting them neon colours as well. They received publicity. Eventually, the city stopped ticketing the bikes and reluctantly agreed to treat the project as public art. It is called The Good Bike Project and it has been applauded by cycling and environmental blogs for "defying" the city of Toronto.

Call me a disloyal artist if you will. Tell me I lack appreciation for symbolism. Accuse me of being no fun. Fine. But I look at these pictures of spraypainted bikes locked up to bike racks and I think: "Someone could have used that bicycle. Someone could have used that bike rack." I've read the article a couple of times and have browsed the project's website, but I don't get what exactly it is protesting and what exactly it is trying to say. It seems to me that in removing blatantly abandoned bicycles, the city of Toronto was actually doing cyclists a service by freeing up bike racks and other potential lock-up spots. Of course it would be great if those abandoned bikes could be rescued, then refurbished and donated to those who need them. But to turn useful objects into decorations, while also taking away parking spaces from cyclists? I don't know. Spraypainting a bicycle so as to render it unridable is not recycling, and perhaps what irks me is that this word is being used to describe the Good Bike Project. Refurbishing a bicycle is recycling, and I would love to see that become the de facto fate of abandoned bikes in cities throughout the world.

Whether spraypainting abandoned bicycles is art is not my call. And perhaps it's ironic that in the back of my mind echoes the sulky professor's complaint that painting always wins. "Paint it and they will applaud," he'd say - to warn, I now realise, rather than to mock.
Labels: art social commentary